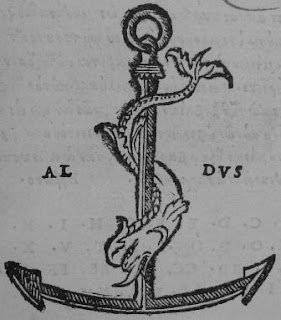 If the Renaissance had a trademark, it would be the the dolphin-and-anchor device of Aldus Manutius. The famed Venetian printer and humanist scholar produced a series of elegant and convenient editions of the classics in the late-fifteenth and early-sixteenth centuries, and the Aldine press was so successful and renowned that the device was imitated by printers throughout Europe. By using an anchor device, printers could capitalize on the existing authority and prestige of the Aldine press--an act of appropriation and allusion that would be reenacted by numerous publishing firms over the following centuries. And it is in that spirit (of both attribution and arrogation) that the anchor device has lent itself, once again, as the title of this blog. For the inaugural post, then, I'm going to combine two things that this blog will feature frequently -- thinking about the meaning of early modern books (and their various and sundry features) and looking for interesting examples of those books (a lot of which will be found right here, out on the prairie of Iowa).

The emblem of the dolphin and anchor was used to illustrate the proverb festina lente, or "make haste slowly." Erasmus composed a lengthy essay on this proverb in his Adagiorum collectanea, a collection of  "adages," or classical proverbs, which he kept revising throughout his career. The second edition of 1508 was published by Aldus in Venice, and Erasmus would subsequently and fulsomely praise his printer in the course of explaining Festina lente. (Most of the essay can be found here, in the helpful edition I quote from) At Iowa, we have a 1599 edition of the Adagiorum (in a magnificent binding; but more on that another time) in which an early reader has marked the importance of the Festina lente essay:

Erasmus traced the motto back to the emperor Titus Vespasian, who had minted a coin with the emblem, and Erasmus was allowed to inspect just such a coin by none other than Aldus himself (it had been a gift from Pietro Bembo). Before he began using it as his device, though, Aldus included an illustration of the motto in the fantastically complex and lavish book Hypnerotomachia Poliphili (1499), by Francesco Colonna. (A facsimile of the 1499 edition is here; a facsimile with an English translation by Joscelyn Godwin  is the image below). 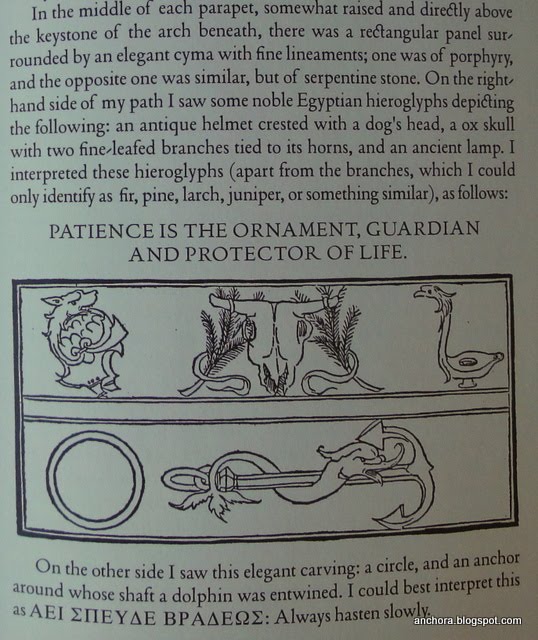 Erasmus seems to have this image in mind, explaining the proverb by recourse to "ancient texts relating to hieroglyphics": "the circle as having neither beginning nor end represents eternity. The anchor, which holds back and ties down the ship and binds it fast, indicates slowness. The dolphin, as the fastest and in its motions most agile of living creatures, expresses speed. If then you skilfully connect these three, they will make up some such principle as 'Ever hasten slowly.'"

The motto expresses sound advice, particularly for princes, and for those "devoted to the cult of liberal studies."  By claiming it as his own (recognizable and marketable) emblem, Aldus gave "fresh celebrity to the same device that was once approved by Vespasian," according to Erasmus. It is not only "most familiar, it is highly popular among all those everywhere in the world to whom sound learning is either familiar or dear." Indeed, it had perhaps become too popular, for "the city of Venice, with its many claims to distinction, has none the less become distinguished through the Aldine press, so much so that any books shipped from Venice to foreign countries immediately find a readier market merely because they bear that city's imprint."

Erasmus expands on his dissatisfaction in a lengthy digression on the egregious state of the marketplace, where he praises the efforts of Aldus to produce reliable, corrected editions of the classics, cleverly juxtaposing the motto derived from the coin of Vespasian with "those common printers who reckon one pitiful gold coin in the way of profit worth more than the whole realm of letters." He also decried those who would impersonate Aldus for profit:


"Punishment waits for the man who sells cloth dyed in England for cloth dyed in Venice, and he is left free to profit from his impertinence who markets mere textual corruptions, intellectual colic, under the label of good authors. You may say, it is not the seller's business to guarantee the buyer against any and every defect. Perhaps: but at least it should be so here, if the title-page promises diligent accuracy and the book is stuffed with blunders."

Elsewhere Erasmus does equate the intellectual and economic liberality of the Italians: "Aldus, making haste slowly, has acquired as much gold as he has reputation, and richly deserves both." His commitment to liberal studies distinguished Aldus from what Erasmus considered the vulgar marketplace of print--yet as his comments here demonstrate, the Aldine press was nevertheless a participant in a commercial system, and its famous device was an emblem that appealed to, circulated among, and was interpreted by customers and readers.

The earliest example of Aldus's anchor-and-dolphin device that we have here at the U. of Iowa is a 1503 copy of the Florilegivm diversorvm epigrammatvm  (InfoHawk catalog record), a Greek anthology that had been edited (at least for this edition) by Aldus himself. 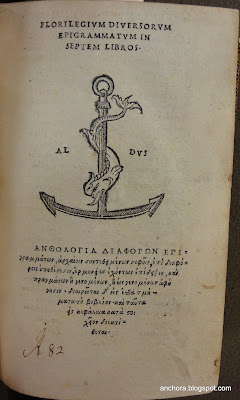 The Adagiorum had been a similar kind of book -- and its a kind of book that will make frequent appearances here, due to my own inveterate interest in the practices of making, reading, and circulating excerpts (which can be classed under the general rubric of "commonplacing"). The first part of the Erasmus's Adagiorum consists of an attempt to define the genre of the proverb, as opposed to similar but distinct kinds of textual excerpts (maxims, apophthegms, or facetiae, for example). In the De copia, Erasmus paraphrased the classic metaphor for commonplacing, taken from Seneca: "So our student will flit like a busy bee through the entire garden of literature, will light on every blossom, collect a little nectar from each, and carry it to his hive. Since there is such an abundance of material that one cannot gather everything, he will at least take the most striking and fit this into his scheme of work." The garden metaphors--busy readers, like bees, need to gather nectar from the choicest "flowers," or texts--are evident on the title-page above, which calls this little book both a florilegivm and an anthologia.


An early owner of this copy of the book did indeed imitate a bee by combing through the pages and marking up the most appealing bits, since there are a few manicules sprinkled throughout -- the little pointing hands that Bill Sherman (see Used Books) has made into everyone's favorite form of marginalia. 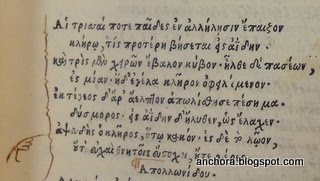 Erasmus wrote that by publishing only worthy books, meant for the common good, "Aldus is building a library which knows no walls save those of the world itself." I'll certainly make no claim to be doing anything of the sort here, but I will end here by linking to a few sites (in our version of a library without walls) that have some fantastic images of Aldine books, and where you can learn more about his career.

Manutius in Manchester -- devoted to the amazing collection of Aldines at the John Rylands Library, which has recently recatalogued what constitutes one of the largest collections of Aldine imprints in the world

An online exhibit from BYU that features a plethora of images from their collection of Aldine books, called In Aedibvs Aldi

In Praise of Aldus -- a book and exhibition catalogue from a previous quincentenary, written by H. George Fletcher in conjunction with the Pierpont Morgan Library and the UCLA Department of Special Collections

A Dante exhibit from Notre Dame, which features two amazing images of illuminated leaves from the 1502 Aldine edition of Dante

A nicely bound Suetonius at the University of Rochester