The Importance of Being Indexed 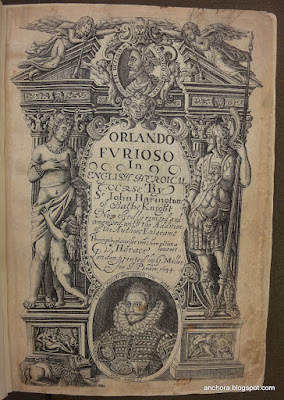 I recently taught Sir John Harington’s “Briefe Apologie of Poetrie,” which prefaces his monumental translation of Orlando Furioso (1591; the 1634 edition from the Iowa Special Collections is pictured above; the catalog record is here). Harington’s “Apologie” is just as much a defense of himself as of poetry in general, particularly his decision to expend so much effort on a work that so many would find trivial, if not outright offensive. As he writes (in the excerpt below): “But now it may be and is by some obiected, that although he [Ariosto] write Christianly in some places, yet in other some, he is too lasciuious.” After listing several examples of just this kind of lasciviousness, Harington predicts the likely reaction of readers (if not twenty-first century students) at this point, writing that “I see some of you searching already for these places of the book, and you are halfe offended that I haue not made some directions that you might finde out and read them immediately.” 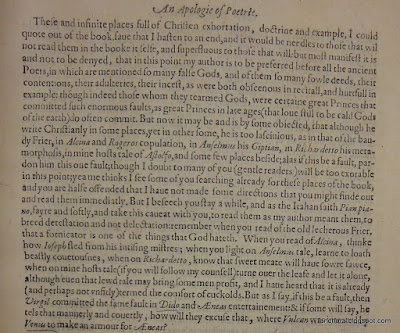 Harington is technically right here, but he is also characteristically disingenuous: he may not have provided page numbers in the preface, but the volume does include an index in the back: There you would find, for example, a reference to the last of the passages Harington cites in the preface, “mine hosts tale of Astolfo,” unsurprisingly listed under “Astolfo,” which gives a page number of 225. To which, of course, you would directly turn: 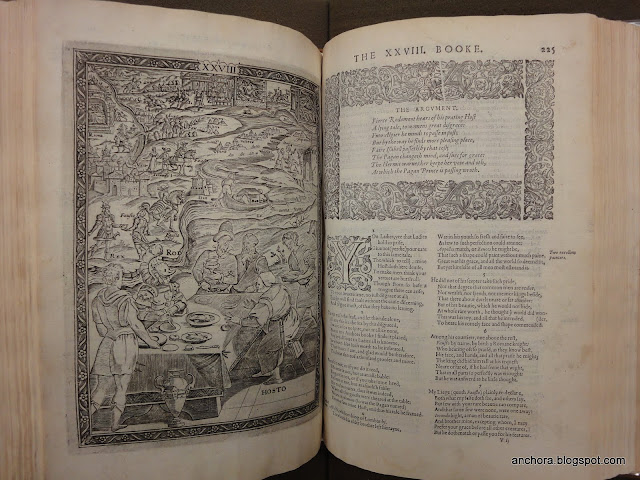 The Argument here calls the contents of the twenty-eighth book “A lying tale, to womens great disgrace,” which, if you are familiar with Orlando Furioso, you know to be exactly the case. If you wanted a more detailed summary of what could be found in this book, you could also turn to the last page and look over the notes Harington provides, where he cleverly claims not to know what the moral of the story seems to be (at least of the more ostensibly immoral parts of the plot). 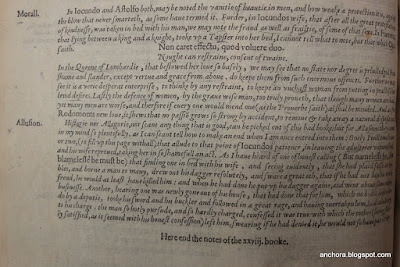 Now, an index is of course intended to help readers find their way to a particular passage in a book; and more importantly, the index is a crucial tool for the kind of discontinuous reading that the codex form encourages. And, of course, one can do all sorts of more important, serious, scholarly things with an index than to quickly and efficiently find the lascivious passages in a massive book. Erasmus no doubt agreed, considering the scorn he heaps on “common printers” in the Festina lente essay in his Adages. Erasmus was firmly focused on ethical, intellectual, and practical value—and an essential part of this value was the valuable indexes he prepared for editions of the Adages. Ann Blair, in her fantastic new book Too Much To Know, discusses indexes at length (including those of Erasmus) since they were one of the fundamental features of the big reference books she focuses on—some of them extraordinarily enormous undertakings with elaborate indexes. Although the Adages were arranged according to no particular order (a result, in part, of it accretion over time), there were multiple indexes:


“Erasmus’s choice of a miscellaneous order has been taken as a sign of his shunning utilitarian purposes in favor of aesthetic and literary ones. In fact, Erasmus also accommodated utilitarian consultation reading of his work, by providing high-quality indexes of multiple kinds (by adage, by commonplace heading, and of ‘other words and things’ ) to ensure that the large volume could also serve as a reference work.”

This is not the place to unpack the implications of the first sentence here—the difference, or indeed, often the similarity between the “utilitarian” and the “aesthetic” is an ongoing occupation of mine, particularly the ways the former quality transforms into or influences the latter. Suffice it to say, those categories are not mutually exclusive (and we might point straight to Harington’s Orlando Furioso index as one particular kind of example of this intersection). My immediate concern here, though, is the multiplicity of indexes Erasmus provided. In the 1599 edition of the Adages (catalog record here) we have at Iowa—a very big book, indeed—there are two different indexes: one listing the commonplace headings, and one listing the individual adages themselves : 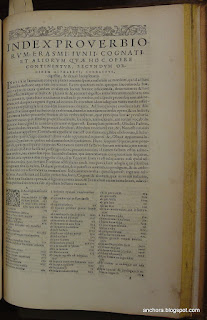 As you might be able to tell from these images, the owner of this book added one more practical feature: the fore-edge of the book has been color-coded to identify the two indexes, making it extremely easy to find and flip to either index. The two yellow stripes are the indexes, separated by thin red stripe, which marks the “Typographvs Lectori.”

This was a book made to be used—by the compiler, by the publishers, and by the owner. (Whether it was actually used it difficult to tell, since the only marks in the volume are the simple highlighting of the title of the Festina lente essay). It was also made to be displayed, though, as the image below shows—the fantastic blind-stamped binding marks this book as a showpiece of sorts.