Last Friday, while everyone else prepared to flee Iowa City for spring break, I took a field trip to the Oakdale research campus north of town, to visit the research lab and papermaking studio of our resident paper expert, Tim Barrett. You may have heard of Tim -- he's a renowned expert in the field, and in 2009 he was awarded a MacArthur Fellowship (making him not only the expert on paper here at the UI Center for the Book, but a certified genius as well). Joining me were the Curator of Rare Books in the UI Special Collections, David Schoonover (who packed a suitcase full of rare books for us), and Rachel Stevenson, an undergraduate English major who is conducting an independent study with me this semester on the topic of early modern reading.

Tim recently completed work on a massive research project focused on the composition of paper in incunabula. Using non-destructive research techniques (principally X-ray fluorescence) Tim analyzed the paper in about 1500 books, charting the estimated percentage of gelatin content in each. The results will eventually be available online (here is a brief description), but to summarize from the presentations I've seen Tim give to my classes, there was a decrease in gelatin around the year 1500. The interesting thing from the point of view of book historians is that this means that the paper in incunabula was made to mimic the qualities of parchment -- a scientific confirmation of the continuity between manuscript and early print culture. Being a professional English major, I don't understand the scientific details (so don't ask me for a better explanation); but I did understand enough the first time I heard this that my jaw hit the proverbial ground.

So what were we doing absconding with a suitcase full of rare books? We were hoping to see what Tim's X-ray equipment might be able to tell us about some of the signs of use we've found in the books in our collection: could we figure out if marginalia seemingly written in the same hand and the same ink is actually chemically identical? could we distinguish what appear to be two different inks? could we tell if the writer had specially prepared the margins of the page, perhaps by brushing a solution of alum water over it? To be clear, these techniques would not date the ink; the most we could hope for was to confirm, chemically, that inks that appeared to be the same (or appeared to be different) were indeed the same (or different). Because early modern writers needed to replenish their ink supplies relatively often, different batches of ink might carry specific chemical fingerprints--so we might be able to tell that some time had elapsed, but not how much time; or, conversely, to tell that the writing that appears throughout a book is indeed written in the same ink, and thus presumably at about the same time.

This is probably easier to understand with a case study, and here I'll use one of the books we took along with us, a 1679 copy of Spenser's Works. During one of my class sessions in Special Collections, I'd noticed a good deal of writing throughout the book, so this seemed like a good test case. Rachel noticed that there was a name on the title-page -- a woman's name: "Letitia Thomson her book." The ink looked similar to many of the annotations throughout, which offer up literary-critical judgments on Spenser's text (some of which are written in Latin or Greek). Could these notes have been written by Letitia? We fired up the X-ray machine to see what we could see. 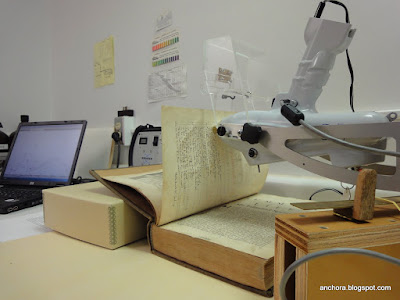 Here's the title-page being analyzed (with Tim's laptop in the background; you can just make out the chart of the analysis). Tim took a few different readings: first a blank space on the paper (no printing or annotations); then the area where Letitia had written her name; then a later page in the book that featured some marginal annotations. 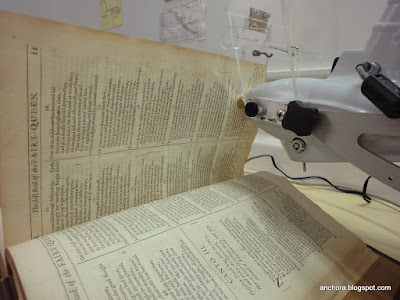 The results were interesting, maybe even promising, but not exactly what we were looking for. The percentage of iron did skyrocket when we aimed at the ink, which you would expect from iron gall inks--but it proved to be nearly impossible to reliably match up inks from different parts of the book. We encountered a number of difficulties: this X-ray machine isn't quite built for this kind of precision work; it's really difficult to focus in on handwriting (particularly when, like in this case, the letterforms were rather thin); and variations in the composition of the paper (even at different locations on the same page, let alone different sheets altogether) cast some doubt over whether the variations we saw could be attributed to the ink, or to the paper itself. The analysis of the ink on the title-page didn't match the ink on the page in the picture directly above, but this may simply have been a function of our limited success using this particular equipment.

As we continue to explore the rare books collection here, we'll stay alert to see if we can find any books that might suit this form of analysis better than the books in our suitcase did -- the ideal would seem to be a single page that contains at least two discernibly different hands (and thus inks). So we'll see. In the meantime, I've done a bit of searching to see if folks elsewhere have tried something similar -- and indeed they have, the results of which have been published in journals I don't usually come across, mostly from the field of art conservation and preservation, or from scientific journals like X-Ray Spectrometry. (The citation of a recent review article can be found here -- it includes the results of analyzing a manuscript of the "Mass in B minor" by Bach, and Georg Buchner's Woyzeck manuscript, along with the Dead Sea Scrolls). I also came across the Iron Gall Ink website, which includes a recipe and instructions for making your own!
Posted by Unknown
Newer Post Older Post Home