There may be no better way of demonstrating discontinuous, indexical reading than paging through a Geneva bible, with all of its cross-referenced (and occasionally ideologically entertaining) marginalia. Bibles are more likely than "literary" books to show signs of use, and because there were simply so many bibles printed in the early modern period, just about any special collections library is likely to have a good number of them. That is certainly the case here at Iowa, which is why I always incorporate a unit on bibles in my book history courses.

The bible in the image below is a Geneva version from 1580 (here is the InfoHawk record). This bible was printed by the Queen's printer, Christopher Barker, and is bound with some supplementary indexes, the "Two Right profitable and fruitfull Concordances, or large and ample Tables Alphabeticall" that you can see below. At first glance, there are a number of interesting things to see here, including the handwriting practice on the title-page that marks "THE ENDE" of the bible on the facing verso, where a reader has circled the ornament, which happens to be the motto of the Order of the Garter ("Honi Soit Qui Mal y Pense," or "evil be to him who thinks evil," translated rather literally). On the title-page you can also see Barker's device, with the tiger's head at the top -- which not only served as the sign of Barker's shop, but was borrowed from the crest of the Walsingham family (Sir Francis is thought to have been a patron for Barker). The motto on the device is a bit puzzling (and indeed has puzzled people for quite a while, as this ancient Notes and Queries article attests, here). It can be loosely translated as "the wicked animal tiger, son of the old Adam, was by the Gospel made a lamb." 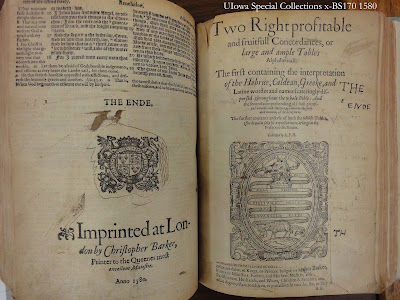 You can see at the bottom of the title-page that the imprint is missing -- and it's missing because one of the early owners was particularly attracted to Barker's device, so much so that they started to cut it out, as you can see better in the image below. This is notable enough, in and of itself -- cutting images out of books, for a variety of purposes, was not uncommon -- but it is the response to the printer's device that really intrigues me, since it demonstrates an early reader (or user) of the book responding to and interacting with the symbolism (or at least the attractiveness) of a device. 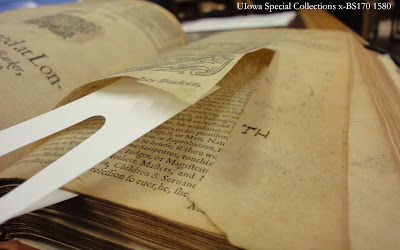 Fortunately, whoever started cutting out the device stopped, and not only because it left behind crucial evidence of the cutting itself. On the verso of the title-page we have another common form of book use: the "anathema," or book curse, a warning for potential thieves. In this case, the curse isn't really a warning -- it's a promise of a reward if someone should find the (presumably lost) book and return it to the owner. As you can see, there are two separate curses here, which are transcribed below: 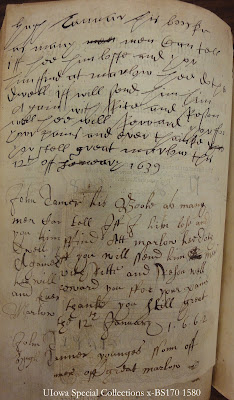 Iohn Tanner his Booke as many
men Can tell Iff I him lose and
you him ffind Att marlow hee doth
Dwell.  If you will ssend him him mee
Againe with Ritte and Reson well
hee will Reward you ffor your pains
and Euer thanke you still great
Marlow the 12th Ianuary 1.6.6.2

So these aren't two curses -- they are the same curse, written by two owners, who happen to be father and son. And the son has written his curse on exactly the same date as his father, the 12th of January, just 23 years later. I find the date, along with that final note (where John explains that he's the youngest son of Hugh, of the town of Great Marlow) to be rather touching: a respectful display of familial piety, as well as a display of the importance of this particular bible to the family.

The town of Great Marlow is in Buckinghamshire, south-east of Oxford near High Wycombe. John Tanner's will can be found online here thanks to the National Archives. John must have been rather young when he wrote out the book curse in 1662 -- the will is dated 1709, and it seems that he may not have died until 1718, at the end of what was apparently a long and fruitful life. The numerous bequests he made to his children and grandchildren, modest (though far from insignificant) may confirm this impression.

John Tanner was, according to his will, an "oat mealman" -- a job which, in case it isn't self-explanatory, you can look up in the OED (under "oatmeal-man," now obsolete, but common enough at the time). His job as an "oat mealman" is something akin to a miller, which you can see at the bottom of the image below, where he bequeaths to his son (also named John Tanner) "my Mills horse sacks and all other materiall and utensill belonging to my Trade." 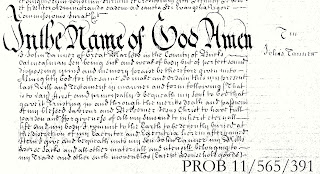 The family bible is not mentioned in the will, which is not surprising -- books were rarely mentioned in wills -- but the family bible was presumably one of the things passed down to his son and daughter, John and Jane Tanner. Here is an excerpt from the will:

The family bible may have been among the"household good[s]," as would be fitting -- the bible in which John Tanner had marked, quite literally, his family affiliation and his family fortunes would continue to stay in the family. For a while, at least, until the book made its way, somehow or another, all the way from Great Marlow to Iowa City.