The Special Collections library at the University of Iowa is an amazing archive -- but it is not generally known as a repository of Renaissance books. There is a rich collection of early modern books here -- a collection that is, nevertheless, mostly hidden from scholars and students. In my own research and (especially) my teaching, I aim to use and build on the strengths of the collection in order to make it visible and accessible. I maintain a few freely available lists of books I often use in class sessions, and I encourage students to undertake their own investigations.

There are many discoveries to be made in "hidden" collections around the world -- and I'm not the first one to have this idea right here in Iowa City.

In 1967 an M.A. thesis was submitted to the Department of English, written by one Charles B. Taylor, called "A bibliographical study of the University of Iowa Special Collections Department holdings of English books within the period 1475-1700, with analyses of selected editions of literary interest." 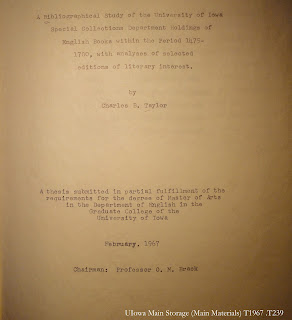 I'm not sure exactly who Mr. Taylor was -- all I've found so far is that he seems to have received his Ph.D. from Northern Illinois University, where his dissertation was a critical edition of Nosce Teipsum by Sir John Davies (here is the catalog record). As is evident from the title, his M.A. thesis was an attempt to systematically catalogue all of the STC and Wing books in Iowa's collection -- no small task, even for a collection of relatively modest size. The crucial phrase of interest here is "selected editions of literary interest" -- the twenty-six books that were chosen for close analysis are all standard and canonical: our copies of works by Bacon, Beaumont and Fletcher, Donne, Milton, and Spenser, along with Boyle and Hobbes, among others. As Taylor writes, although such a project could be of use to scholars in a variety of disciplines,


its primary direction, however, has been toward the student of English Renaissance literature. To make the listings as complete as possible in a literary sense, the main catalogue of the library has been checked for holdings of the major authors listed in the first volume of the Cambridge Bibliography of English Literature index for the period 1500-1660. Surprisingly, a fair number of books were discovered still remaining in the open stacks (5-6).

The procedure was (by necessity) done in reverse -- a standard literary reference work with a list of canonical authors was used to identify Renaissance books in the collection -- some of which, strikingly, were still housed on the open stacks (including a 1686 copy of Cowley's works). Taylor's search was aimed at discovering local copies of books which already possessed a recognized (literary) value -- whereas I'm usually happiest finding marked up copies of any book whatsoever. It also shows, quite clearly, a wider shift in our attitudes toward early modern books, at least among scholars who identify with the field of book history.

Despite its ostensibly literary orientation, the M.A. thesis is firmly anchored in analytical bibliography. Several books that Mr. Taylor found were not listed in STC or Wing (the old, unrevised editions, which of course he had to use in 1967 -- which leads him to a charming remark that the revised STC was due to be published in only a couple of years, an estimate that was off by about three decades). This leads to the most interesting physical aspect of the M.A. thesis itself: xerox copies of the title-pages of books that he had not seen described or reproduced elsewhere, folded and inserted into an appendix. Below is the reproduction of the Iowa copy of Harington's Orlando Furioso (which I wrote about here, with a better picture using our current digital technology): 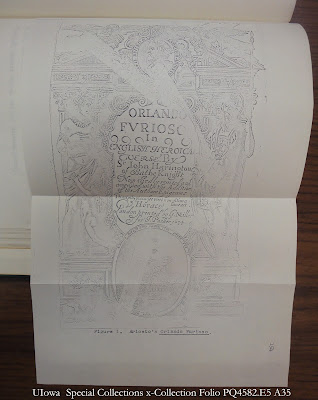 The bibliographical descriptions are, by and large, rather useful -- for example, he identified a mistake in the catalogue entry for a book lacking a title-page, which had been dated without recourse to any verifiable evidence. Mr. Taylor also prefaced his descriptions with a rather poignant comment about the value of "less known libraries" such as the Iowa collection:

it is impossible within the short space of this introduction to outline all the variations discovered in the editions examined. One can note, however, that the modest discoveries made here indicate that the major libraries, such as the British Museum, Bodleian, Folger, Newbury [sic], etc., do not yield enough copies to permit any final conclusions about particular editions of many works. For the sake of completeness and accuracy, the holdings of less known libraries, such as the University of Iowa, will need to be accounted for (126-127).

The collection at Iowa has grown since 1967 -- Mr. Taylor listed around 100 STC books, and a search in our online catalogue now comes up with over 300 results (the increase due to acquisitions and more thorough cataloging). In our digital environment, it is (or should be) much easier to recognize and publicize the holdings of libraries in a manner more effective and sophisticated than xerox copies of title-pages. In theory, the online ESTC provides a venue for this, although anyone who has used this database in its current state knows that for the most part it only lists copies in major repositories. This is changing, however, as the ESTC continues to develop and expand.

There are many discoveries yet to be made. So, in the spirit of Charles B. Taylor, proud recipient of an M.A. from Iowa, here's to the "less known libraries" out there.
Posted by Unknown
Newer Post Older Post Home