[This is a guest post by Rachel Stevenson, my independent study student who has been studiously digging through our STC collection this semester. As part of her independent study, she's required to write short research essays on some of the interesting things she's found -- and instead of keeping it to myself, we agreed that she would write a post for Anchora. This has also been a good week for Rachel -- she was awarded the English department's annual prize for the best essay on Shakespeare, and I received word that we've been awarded an Iowa Center for Research by Undergraduates grant, so that Rachel can continue digging through our collection over the summer. Good work!]

The case of Thomas Lupton's A Thousand Notable Things of Sundry Sorts (catalog entry here) is a perplexing one, because it is an assemblage of items without any sort of organization. This did not deter our reader, who wrote his own headings and notes, turning this book from a confusing amalgam into a useful reference book. Other people involved in publishing the book, Edward White and James Roberts, add to the interest surrounding the publication. I am fascinated with the intricate web of the London book trade and the intertwining connections between different printers and publishers.


Thomas Lupton (fl. 1572-1584) held some controversial views, advocating for the national control of morals and religion, and writing tracts and plays with moralistic and anti-wealth themes, while also addressing anti-Catholic sentiments. Lupton was less mainstream than his fellow Protestants (he believed the world was going to end in 1588). His list of works signals his devotion to these topics. The 1578 morality play All for Money demonstrates the ability of money to corrupt people in learning, law, marriage, and the priesthood. After that came 1579’s A Thousand Notable Things of Sundry Sorts and 1580/1581 Siuqila, Too Good to Be True.  The following two texts were both published in 1581: A Persuasion from Papistry and The Christian Against the Jesuit. Both address the controversy surrounding John Nichols, a fallen Protestant minister turned papist, who returned to London from Rome that year and was subsequently imprisoned in the Tower of London. Finally, in 1584, Lupton published A Dream of the Devil and Dives, which chronicles a conversation between the devil and the character Dives. He goes through a horrifying dream like James Stewart in It’s a Wonderful Life, where the world is opposite from reality and filled with terrible things. The book then finishes with the end of the world in 1588 as predicted by Regiomontanus.

Siuqila, Too Good to Be True (1580, 1581) is one of the most interesting of his works. In the style of Sir Thomas More’s Utopia, Lupton writes about an idyllic place called Mauqsun (backwards Latin word, nusquam, nowhere), with the story told by Omen (backwards Latin word, nemo, nobody), and the place is contrasted with Ailgna (Anglia, England). The second part of the play, the so-called "knitting up," is seen as the inspiration for the conclusion of Measure for Measure (one of my personal favorites of Shakespeare’s plays). This work reminds one of George Orwell’s 1984, dealing with the surveillance of the citizens’ behavior and following up with terrible punishment. Thomas Lupton’s moralizing work serves to create vigilant English citizens who do not tolerate religious backsliding. [Ed.: if you have access to the DNB, from which some of this information is taken, go look at Lupton's bio--it's an entertaining read.]

A Thousand Notable Things is seen as Thomas Lupton’s most secular and most subtle moralistic work, and was so popular that it was reprinted into the 19th century. Although our book lacks a title-page, I feel that a closer examination of the title-pages from later editions of the work reveals that reading the book as a secular work with little moralistic intent is over-simplified, and that it is a direct explication of his “abhorrence of a money economy” (DNB). The title-page text addresses the true reasons behind writing/assembling the work:

A thousand notable things of sundry sorts. Whereof some are wonderfull, some strange, some pleasant, diuers necessary, a great sort profitable, and many verie precious. This booke bewraies that some had rather hide, which who so buies, their mony is not lost: for many a thing therein if truely tride, will gaine much more the[n] twentie such wil cost. An diuers els great secrets will detect, and other more of strange and rare effect. It is not made to please some one degree, no, no, nor yet to bring a gaine to few: for each thereby how ritch or poore they be, may reape much good, & mischiefe great eschew the paines and trauaile hetherto is mine, the gaine and pleasure hencefoorth wil be thine. (emphasis mine). In this title, Thomas Lupton shows us that the traditional understanding of “profit” is not from money, but that we gain much by being self-sufficient. Money is immediately lost in the economic system that he found so distasteful. To prevent this, he advocates using the tricks in his book. No matter how rich or poor, this book is useful to those who wish to “reape much good” while saving their valuable resources and their money. Lupton’s purpose here is to save his readers from participating in an evil, money-driven economy, while our reader privileges the use of the book as a catch-all daily reference work.

The record for the 1579 edition of A Thousand Notable Things in EEBO lacks a title page, just like our edition. Our book’s first page matches the EEBO 1579 edition, containing a dedication:


To the Right Honorable, vertu-
ous and affable, Lady Margaret
Countesse of Darby.

The woodcut letter “A” is a match in both books as well. The next edition on EEBO (1590) contains a title page and the same dedication, but the format is decidedly different from our book (there is no record on EEBO for the 1586 edition). In all editions afterward, Lupton’s work does not contain a dedication to this patron. When this book was catalogued by our library, the STC did not contain enough information with which to reference the actual date of our book. It seems likely our edition is the 1579 and not the 1595 that our library’s catalog states. [Ed.: it seems like Rachel is right, at least with the resources we have available to us here (EEBO, the STC, and the ESTC); to be sure we'd have to examine other copies in person, but until that time, I think Rachel makes a good case that we have a first edition]

Our reader definitely took A Thousand Notable Things to heart and read and marked the book thoroughly. He makes note of almost every notable thing in the book by either drawing a line in the margin to delineate the separation between each entry or, more commonly, writes a summary phrase of each entry for quick reference. The reader seems especially concerned with home remedies, with some of my favorites including cures for: “Dropsy,” “yellow” and “black jaundice” (there are two kinds?), “cure for a mad dog,” and various instances of “a trick” or “note this”. Want a cure “for chapid lypps”?  Just rub some sweat from behind your ears on them and they will be as good as new:


As I turned each page, I noticed there was no rhyme or reason to the organization of the book except that there are ten books with one hundred entries per book. One page contained the following entries in sequence: “if dogs be not madd,” “good artichoks,” “ache or strich,” and “good wheat.” By marking each of the notable things, the reader turns these miscellaneous entries into an easy and useful guide, making it his own book that provides him help in various situations that he may confront—especially the most terrifying prospect of one’s apples freezing.

The book has multiple readers, one of them named “John,” but he is not the one that did all of the legwork in the margins. 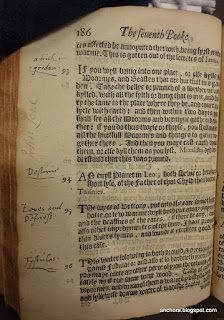 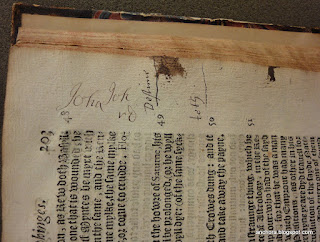 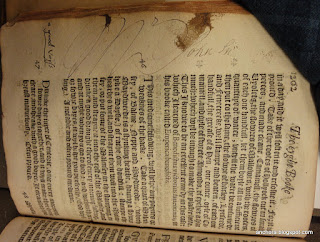 The interesting part about multiple readers in this book is that the second one writes “a fancy” next to some of the more ridiculous entries, creating a fascinating interaction between two readers, not just readers and the text.

Others also wrote their names and other random words like “Kingdom” and “duke,” while also completely filling up the verso of the final page of the index with name practice. This shows us the continuing legacy of Thomas Lupton’s book and that it was a viable source of information and spare paper much after its original print date. 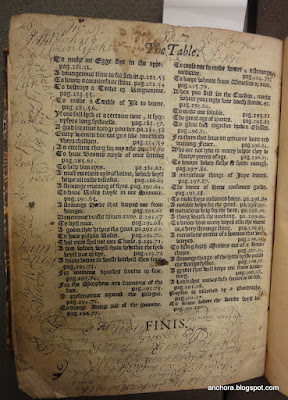 If our edition is the 1579 and not the 1595 that our library’s catalog states, then the printer and publisher are “By Iohn Charlewood, for Hughe Spooner, dwelling in Lumbardstreete at the signe of the Cradle.” John Charlewood was the first husband of Alice Bailey, who after his death married James Roberts. Charlewood’s press and entries in the Stationers’ Register became James Roberts’s property. The book (for editions after 1586) was “Printed by I. Roberts for Edward White, and are to be sold at the little North doore of Poules, at the signe of the Gun.” Roberts and White played important roles in the London book trade and set forth some of our most canonical and controversial works. Even if our edition was not originally worked on by Roberts and White, the discussion of their involvement remains important and interesting.  This partnership would prove to be useful to all parties involved.

Edward White (publisher and bookseller from 1578-1612) used Roberts to print Lupton's book, and they worked together on many projects. Edward White was an appealing agent to sell Thomas Lupton’s book because White printed many anti-papist tracts and his advantageously placed shop in St. Paul’s churchyard made a perfect vehicle to spread the book to the Protestant population at large. Edward White published the 1586, 1590, 1595, and 1601 editions of A Thousand Notable Things. Among the other works White sold at his shop were most notably Doctor Faustus by Christopher Marlowe, and he teamed up with James Roberts multiple times, including work on the Q2 of Titus Andronicus.

James Roberts (1540-1618) was a prolific and important printer/bookseller.  From 1569-1571, Roberts entered five ballads and one almanac; the monopoly of these six texts set him up to live comfortably for the next twenty years, in which he entered no new books into the Stationers’ Register. In the wake of his second marriage, Roberts took over his wife’s press. James Roberts entered five plays for the Lord Chamberlain’s Men (including The Merchant of Venice (1598), A Larum for London (1600), and Troilus and Cressida (1603), and in 1600 he also entered Cloth Breeches and Velvet Hose (now lost)), all of which were later printed by other stationers. In 1602, Roberts entered Hamlet into the Register, but only printed Q2. James Roberts later became involved in printing anti-Catholic tracts (before selling his shop to William Jaggard in 1606) including: Samuel Harsnett's Declaration of Egregious Popish Impostures (1603, which we have at the University of Iowa), Jean Chassanion's The Merchandises of Popish Priests (1604), and George Closse's The Parricide Papist, or Cut-Throat Catholic (1606, printed for Christopher Hunt). This impressive body of work made him an appealing printer to work on this project with Edward White and to set forth the ideas of Thomas Lupton.
Posted by Unknown
Newer Post Older Post Home