The title of this book is misleading -- it is mostly an account of the death of King Richard II, detailing his downfall and overthrow by Henry Bolingbroke, who seized the throne and was crowned as King Henry IV. The imprint states that it was printed in 1599, but it was actually printed decades later. Censorship was not as repressive, pervasive, or effective in Shakespeare's England as it has often been thought to be. Nevertheless, censorship did exist, and so attempts to avoid it -- or to exploit it -- are of particular interest. 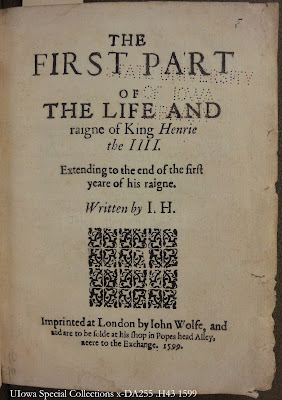 Sir John Hayward's The First Part of The Life and raigne of king Henrie the IIII, first published by John Wolfe in 1599, included a Latin dedication to none other than the ambitious earl of Essex. Due to the perceived parallels between the reigns of Richard II and Queen Elizabeth, Hayward's book was immediately suppressed. The dedication to Essex was removed, but a second edition in 1599 was seized and burned. Hayward was interrogated by Francis Bacon, who refused to find any treasonous intent in the book, beyond the fact that Hayward seemed to have plagiarized from Tacitus (a knowledgeable, and much more important recognition, since this book plays a key role in the turn toward Tacitean history writing in the seventeenth century).

Two years later, Essex would act on the ambition often attributed to him in his infamous (and infamously ineffective) rebellion -- which was immediately preceded by a command performance of Shakespeare's Richard II by his theatre company. Once the ill-fated rebellion took place, Hayward was put into the Tower where he spent the rest of Elizabeth's reign, until her death in 1603.

Here at Iowa we have a copy of Hayward's book (catalog record here) with an imprint that says it was published "by Iohn Wolfe" in 1599. This edition, however, was one of a number of editions published after 1599 which nevertheless retained the 1599 imprint. Title-pages can be extraordinarily conservative in subsequent editions (retaining a claim to be "newly corrected," say, long after the initial corrected edition appears), but the false imprint here would seem to be an effective way to avoid any further trouble with the authorities. That is, the book could be reprinted and circulated as nothing more than a stray survivor of the initial suppression in 1599.

There are a few key differences in these "1599" editions which allow scholars to distinguish among them, mostly the differences in the printer's ornaments on the title-page, and the existence of a misprint in the dedicatory epistle. At first glance our edition looks a lot like a "1599" edition that the STC dates to c.1629:
However, this c.1629 edition has a crucial misprint on the next page, an inverted "e" in the word "Teucer":
Our copy has the same arrangement of type ornaments on the title-page, but here the error is corrected, and the "e" is not inverted: 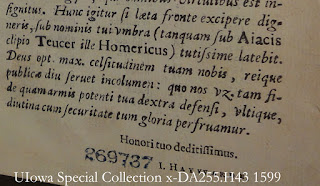 According to the STC, this combination means that our edition is c.1638 (STC 12997a). The EEBO copy of this edition confirms that it must have been published during the 1630s, because it includes a portrait of Hayward that was not printed until 1630, in his The Life and Raigne of King Edward the Sixt:
Our copy of Hayward's inflammatory 1599 book was thus published nearly forty years after the first edition, and hence long after any supposedly dangerous topicality would have subsided. This makes me think that it's just as likely that the publishers may have been marketing their "1599" book as a kind of collector's item -- a remainder from the original (censored) edition, rather than simply a way to avoid trouble. Indeed, the very next year, in 1639, another issue of this edition appeared with a cancel title-page that included an accurately dated imprint: