My last post featured our copy of the Kelmscott Press edition of Spenser's Shepheardes Calender. At that time I also looked at another book in the Iowa collection from the famous fine press of William Morris, but it's taken a bit of time, and a bit of digging, to explain its significance. The book's contents are near and dear to me -- and more importantly, central to my work on the early modern book trade -- Shakespeare's poems. Here's the title-page of Morris's 1893 Kelmscott edition of The Poems of William Shakespeare (catalog record here): 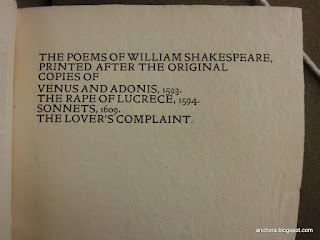 The most intriguing phrase on the title-page is "printed after the original copies," a phrase that reminds me of the famous claim the First Folio makes to publish the plays according to the "True Originall Copies" (click here to see Penn's digitized copy at their excellent SCETI site). It's a claim that is explained in some detail in a foreword, the only paratextual material included in this edition (beyond the colophon, of course): 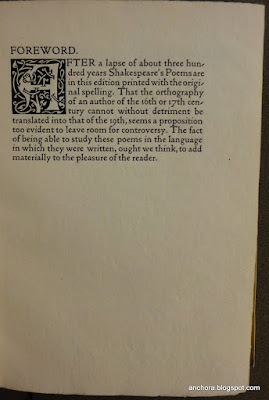 After a lapse of about three hundred years Shakespeare's Poems are in this edition printed with the original spelling. That the orthography of an author of the 16th or 17th century cannot without detriment be translated into that of the 19th, seems a proposition too evident to leave room for controversy. The fact of being able to study these poems in the language in which they were written, ought we think, to add materially to the pleasure of the reader.

This claim struck me as an odd one, particularly in a preface to a fine press edition, where the beauty of the book artifact itself, and the quality of the materials involved (paper, binding, etc.) would be expected to trump any editorial or bibliographic interest in the text. Indeed, the claim was not made by Morris, but by the editor of this book, Frederick S. Ellis, who is named in the colophon: 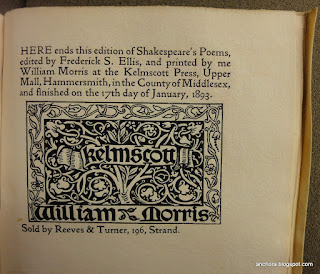 Ellis was a distinguished bookseller and expert on early books who is now known primarily as a close associate of Morris; he read the proofs for Morris's famous edition of Chaucer, and edited several other works for Morris, including Caxton's Golden Legend. Ellis was also an experienced textual editor beyond his connection with Morris, and was known for his work on Shelley. Ellis, then, knew what he was talking about--and just as importantly, was known to at times harbor different desires for Kelmscott productions, arguing to include more scholarly apparatus than Morris wanted. My immediate impression of a conflict between the material and the textual was warranted, then.

Ellis's claim here distills one of the more perennially contentious issues in the editing of early modern texts -- whether to modernize the text, making it more accessible to a modern readership, or whether to preserve the spelling of the early modern editions. The positive side of the latter argument is cited here: an encounter with the text in the orthography of the 16th and 17th centuries is to "add materially to the pleasure of the reader," since spelling conventions were very different than in the late-19th century.

However, the problem with this line of reasoning is a single, crucial word: "author." Ellis here claims, if nearly implicitly, that the "original copies" give us access to the orthography of the author--and not just "an author," but of Shakespeare himself. (This is the same tactic used by the compilers of the First Folio as well). The problem is that, due to the practices of early modern printing, there is no guarantee that the early printed editions preserve anything resembling Shakespeare's spelling. Even if the printers had access to the "True Originall Copies"--i.e., Shakespeare's (authorized) manuscripts--compositors often imposed their own house style on spelling and punctuation. The early narrative poems Venus and Adonis and Lucrece are generally thought to be printed from good, fair copy (almost always assumed to be authorized by Shakespeare himself, although for reasons I won't go into here, these claims have been overstated, since there is some evidence of mediation of some kind). So there may be some validity to the implicit assumptions behind the use of "original copies" in these cases. The status of the sonnets, however, has long been debated--is the sequence authorized by Shakespeare, or were they published without his permission and/or knowledge? And even if the former happens to be true, how can we be sure that the 1609 Sonnets--or any of the early editions of the poems, for that matter--give us something resembling Shakespeare's (intended) text?

The poems have long been considered to preserve exactly that--Shakespeare's intended text--or, if not the intended, authorized text, then at least something closer to what Shakespeare intended than is preserved in any of the printed plays. The reason is simple and seductive: because plays were, by definition, subject to the multiple, messy collaborations of the theatre, they are always already more suspect than the poems, which required none of the necessary collaborative efforts of the stage. This is in some ways a misleading simplification of the differences between plays and poetry (one that is influenced by an anachronistic, and decidedly Romantic, conception of the relationship between the mind of the artist and lyric poetry) but, nevertheless, it is a remarkably apt description of the conventional--and powerful--editorial and critical narratives.

This is not, however, exactly what Ellis had in mind--his claim here seems aimed more at the vagaries of the editorial tradition, and its treatment of Shakespeare's poems. The poems are in the odd position of being the best-selling and most identifiable works by Shakespeare in his own time--Venus and Adonis alone went through twice the number of editions as his best-selling play through the seventeenth century--but were then subsequently neglected and derided by later critics and editors. Since editors, and hence collections of Shakespeare's works, were focused on the plays, the poems were relegated to unauthorized addenda or appendices. It's a paradox--editors expending heroic efforts to track down copies of early editions of the plays, comparing and collating them to identify the (missing) Shakespearean manuscripts that lay behind them, while overlooking the (implicitly less collaborative) poetry. The text of the poetry was both self-evident, since they were thought to be (more) authorized, and not worth critical attention (due to their erotic, transgressive sexual content). So in returning to the "original copies" Ellis seems to intend to remedy the derision and neglect that constituted the usual way of treating the poems, and in this he was surely united in purpose with Morris.

The question remains, though--was this a valid claim? To answer this, I turned to a friend of mine, Fran X. Connor, an Editing Research Associate on the New Oxford Shakespeare Project, who just happens to have recently finished editing V&A and Lucrece. His answer was that Ellis just might have been right--at least on a technicality. The poems were first formally and fully integrated into an edition of Shakespeare's collected works by Edmund Malone in 1790--but Malone's copy-text was what we now know as Q4, since the first edition of Venus and Adonis, published in 1593, did not surface until fifteen years later, in 1805. Malone had been searching for it for nearly two decades, and he (grudgingly) paid a hefty price for it, 25 pounds. Malone complained to his friend Bishop Percy that it was "so extravagant a price that I am ashamed to mention it," blaming the booksellers who were "taking advantage of the present rage for old English Poetry" (a somewhat disingenuous complaint, since Malone played such a crucial role in fostering just this rage -- see this discussion of Malone's discovery, from Peter Martin's biography of Malone, for the full details). Despite his complaint, Malone told Percy that "I do not at all repent of my bargain," for "on collation, I obtained from 25 to 30 new readings, and most of them valuable." However, Malone died before his massive variorum edition could be published--it appeared posthumously in 1821, completed by James Boswell--and, according to Fran, while the new edition does note some of the variants from Q1, it's still largely the previously published text based on Q4. And, also according to Fran, for the most part the rest of the major 19th century editions either follow Malone's lead, and/or were modernized. So, as the case of V&A shows, Ellis just might be right--the Kelmscott edition might be the first to reprint the poems in original spelling after "a lapse of about three hundred years."

But why did Morris choose Shakespeare's poetry as a project in the first place? The coherence (and relative brevity) of Shakespeare's poetic oeuvre no doubt accounts for it in part, along with the concomitant desire to print something by the author at the center of the canon; Morris's fascination with medieval and Renaissance-era books was also certainly part of it, as well. The Kelmscott edition, in line with the larger aims of the Arts and Crafts and fine press movements, also helped inaugurate a trend for deluxe editions of the poems, particularly V&A, as Georgianna Ziegler notes in an intriguing essay on the history of illustrating the poem, found in this helpful book of critical essays (which itself helped to mark a resurgence of critical interest in V&A). Ziegler calls the Kelmscott edition "one of the most beautiful private press editions of Shakespeare's Poems ever made," with its "lush dark ink on cream vellum pages" and Morris's "signature medieval-style borders on the first page of each poem" (396). The Kelmscott edition was the first in a long line of fine press editions of the poem (which continue to be published, even now) -- and as her concluding sentence on Morris's book shows, it is not for the text that it is primarily valued: "The silky softness of the sheepskin vellum under a reader's fingers contributes to the sensual pleasure of this beautiful book."

I'd have to agree with that assessment -- and below are some images of page openings that give some idea of the beauty of this book (although to experience the full sensuality of the book, you'll of course have to find a copy to examine yourself--there's only so  much pleasure the internet can give you): 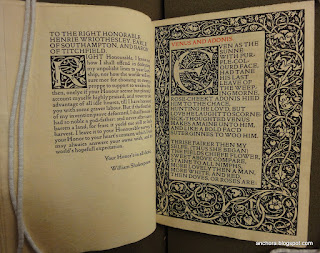 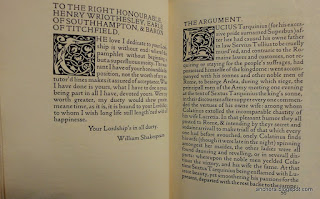 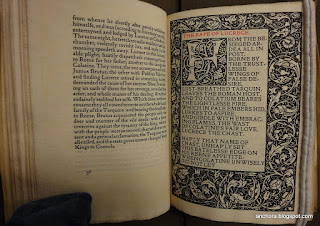 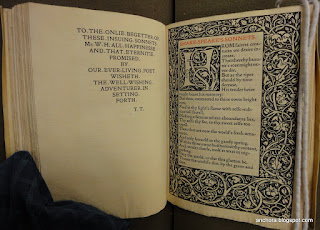 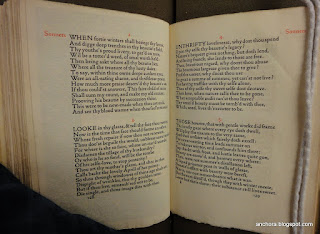 As you can see, the thickness of that signature border wreaks a bit of havoc on the lineation of the verse--the opening sonnet is particularly, strikingly jumbled, especially compared to the regularity of the rest of the sonnets. At least on the opening pages, then, the aesthetic concerns of Morris trumped the textual concerns of Ellis.

There is more--much  more--that could be said about the publication history of Shakespeare's poetry, but I'll stop here, with a teaser that if you'd like to know more about the early publication history of Venus and Adonis, and its crucial place in biographical and critical narratives of Shakespeare's career, you'll have to wait a few months until a couple of my own forthcoming articles appear, which will give you more detail than you probably want to know. Until then, the curious claims made in the Kelmscott edition of the poems have demonstrated the importance and the vitality of the continuing history of the poems' publication--a history that I'll certainly attend to more assiduously.
Posted by Unknown
Newer Post Older Post Home