The fine press collection here at Iowa is the real strength of the Special Collections library -- a strength that, mostly, I've willfully and woefully ignored while I've been here. I see it as my job (along with my trusty summer-fellowship endowed student sidekick, Rachel) to comb through the STC collection to see what we've got in the lesser-known early modern part of the collection. And recently we made an unwitting discovery inside an inglorious book. Rachel pulled a book in which, she found, the back board of the binding had snapped completely off -- it was entirely detached on the shelf: 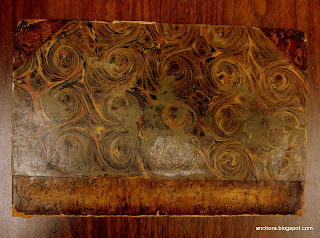 The book was a copy of St. Augustine's Citie of God (1610; InfoHawk catalog record here): 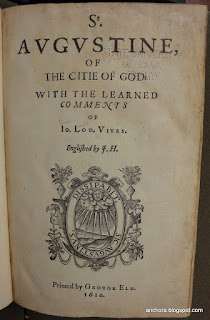 I could see that it had some nice (if faded) work on the fore-edge:

But there wasn't really anything else of interest in the book -- in fact, Rachel only showed it to me so that we could give it over to the folks in Conservation, so that the binding could be fixed. Until, that is, we looked a little more closely inside the front of the binding: 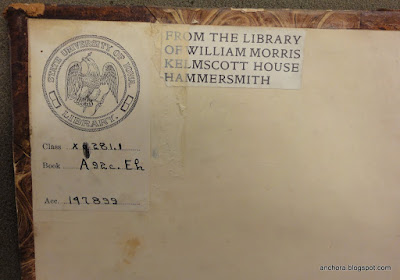 As you can see, there is a (partially damaged) bookplate of William Morris: "From the Library of William Morris Kelmscott House Hammersmith" -- in his famous "Golden" type, no less. Morris was of course one of the most famous and important figures in the Arts and Crafts movement, and we've got several books from his Kelmscott Press in the collection. Indeed, more importantly, Iowa is the home of the William Morris Online Edition which is guided by Florence Boos in the English department. Neither Prof. Boos nor the library staff knew we had this book, so I was happy to contribute, even if in such a small way. We're not sure why the book was acquired by our library -- all we know is that it was purchased in 1919, as you can see from the librarian's pencil note in the gutter below: 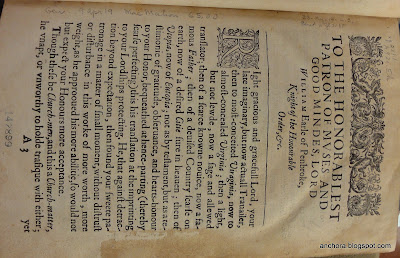 We also don't know why Morris owned the book (although Prof. Boos was kind enough to speculate that perhaps he had contemplated an edition of Augustine at some point). At any rate, this provides a good excuse to explore the online Morris edition, which has digitized some of the Morris works in our collection -- and, true to Morris's emphasis on craftsmanship, you can turn the pages (and you can hear the pages turning!).

Here's one of my favorites, from The Dream of John Ball (here - flip through to the first page opening). You can also learn more about the project, and about Morris himself, on the website. There are additional online exhibitions of Morris's work at the Ransom Center's website, at the William Morris Collection at Maryland -- and you can even make your own Morris bookplate, courtesy of the gift shop at the Victoria and Albert Museum.

I will occasionally call up some of our fine press books during class visits -- our copy of the Doves Press bible compares nicely with some of our massive early modern bibles, for example. One of the Kelmscott books that is not digitized in Iowa's online edition caught my attention, since I regularly teach it: Spenser's Shepheardes Calender (an 1896 edition, catalog record here): 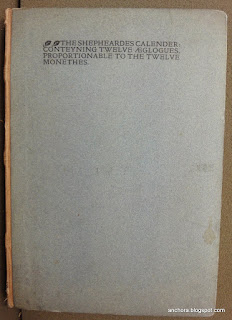 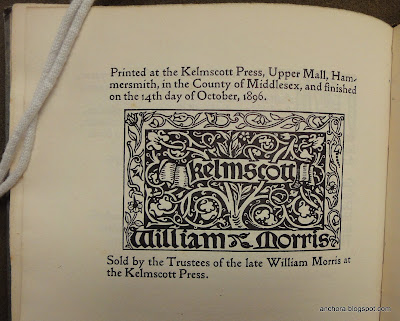 It is a characteristically elegant Kelmscott production, with new woodcuts for each month, and a sparing use of red ink that at times has striking results. Here are a few of my favorite openings, juxtaposed with the corresponding part of our 1617 edition of Spenser (which I recently wrote about, albeit briefly, here): 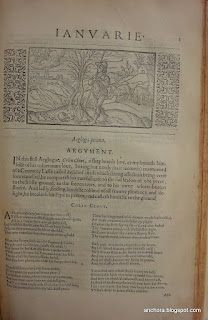 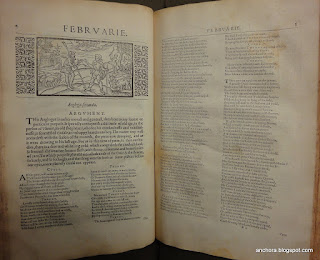 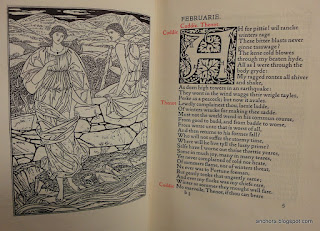 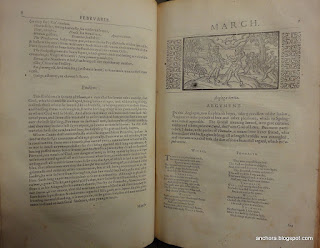 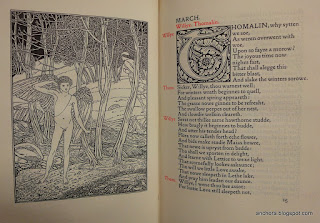 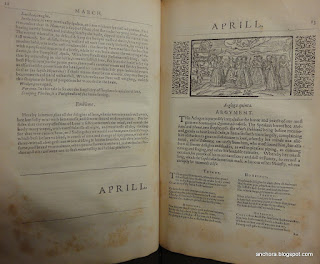 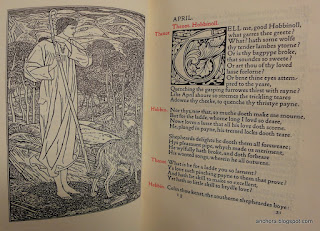 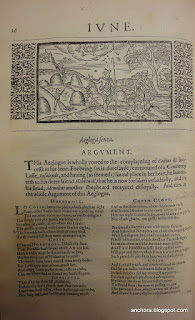 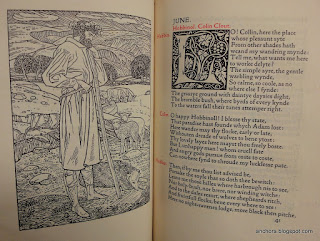 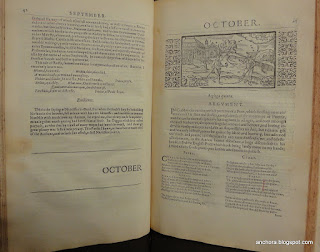 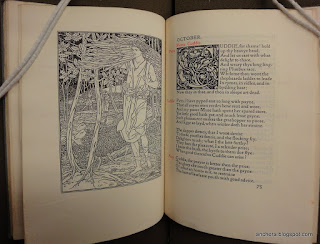 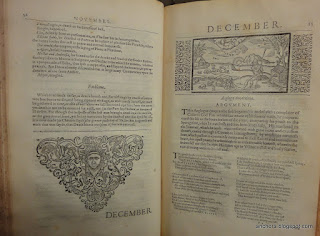 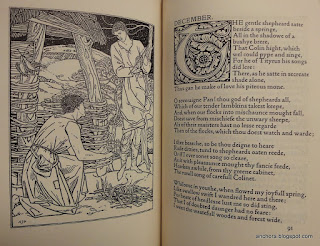 As you can see from several of the image pairs above, Morris only printed the actual eclogues, thereby neglecting the prefatory letters, the prose arguments, the pseudo-scholarly gloss of "E.K.," and the verse emblems. The only exception is the final "Goe, lyttle Calender!" poem (which doesn't make as much sense without the opening "To His Booke" poem that Spenser gave pride of place): 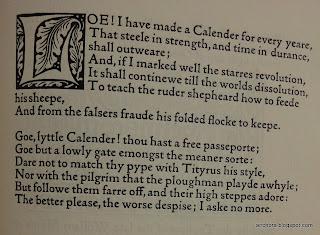 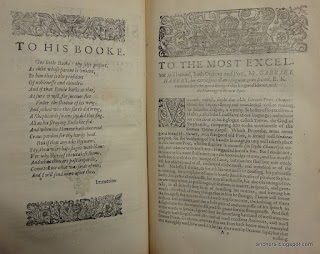 I'm not faulting Morris for omitting the paratextual material -- it would certainly disrupt the simple aesthetic that makes the book so lovely. And Morris is in good company by neglecting this material, since -- to the frustration of myself and my students -- modern editions of Spenser usually make a hash of the Shepheardes Calender. The eclogues and the woodcuts are always included, but E.K.'s notes are often omitted entirely, or haphazardly and confusingly integrated with the editor's footnotes at the bottom of the page. This of course misses the central point of Spenser's work, and misses it widely -- the Shepheardes Calender is a complex material-textual object in which the various elements are all integral -- the paratext is the thing. Isolating the eclogues (since, as Morris's choice demonstrated, they look like poetry as we are accustomed to encountering it) reduces and simplifies Spenser's work -- without everything else, it's a much less interesting artifact.

The first time I taught the Shepheardes Calender I decided to ignore the eclogues entirely, instead focusing only on the "paratextual" features that make the book so crucial to understanding the influence of early modern printing practices on our interpretive activities. The comparison of the early editions with some modern critical editions surprised some of the students -- we have an excellent group of undergraduate readers and writers here at Iowa, and they are more than comfortable with the kinds of contemporary, experimental fiction that Spenser's work resembles in many ways. And the comparison also serves as an excellent lesson in the ways that (scholarly) editors can often dictate our view of early modern works.

The difference is all the more striking since one of the owners of our 1617 edition of Spenser (and not one of the earlier owners, to be sure) was rather taken with E.K.'s gloss -- annotating and underlining in (gasp!) bright pink ink: 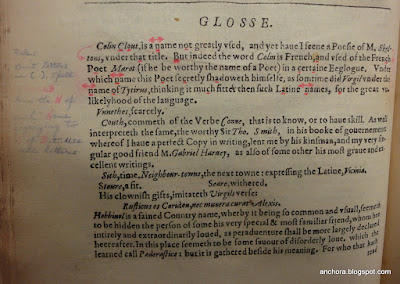 This is the first part of the famous gloss to January (you can just see the beginning of the defense against "Paederastice" at the bottom of the page). I admittedly have very little clue as to what this reader was after -- the note in the margin would seem to indicate that this is part of an attempt to decipher cryptograms in the Shepheards Calender -- which, also admittedly, Spenser encourages by cleverly playing around with the various poetic and scholarly personae he presents and their real-world counterparts, from Colin Clout and Hobbinol to E.K. himself. A fascination with identifying the referents for these personae seems to be the goal here, as several of the subsequent annotations attest.

Gabriel Harvey, who is shadowed as Hobbinol in the poem, is underlined in the gloss to September:

The "White Beare" (a reference to the earl of Leicester) and "ELISA" (the ever-present Queen Elizabeth) are underlined in October: 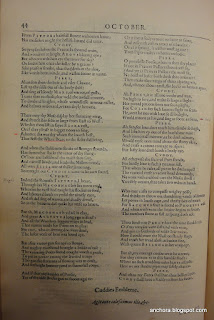 And, of course, we can't talk about cryptograms without talking about You Know What: 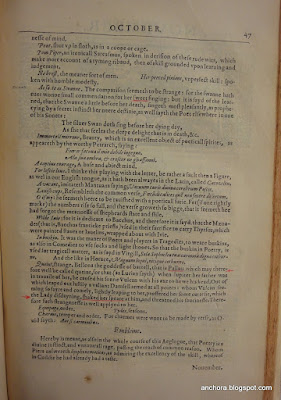 You can see here (click on the picture to enlarge it) that the word "sweet" is underlined in the gloss on the swan, and if you haven't yet figured out that our Pink Annotator is looking for an allusion to the Sweet Swan of Avon, then the arrow pointing to the underlined phrase "shaked her speare" should seal the deal.
Posted by Unknown
Newer Post Older Post Home