Well, I'm certainly not the only one who loves a good anchor device. Here's the most recent -- and one of the most intriguing -- finds from the Iowa Special Collections Library: 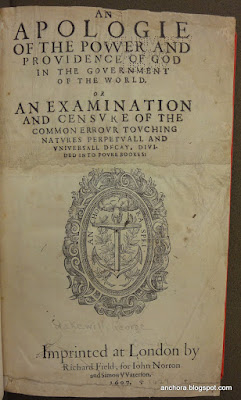 This is the title-page of George Hakewill's An Apologie of the Power and Providence of God in the Government of the World (1627). Hakewill was a Calvinist clergyman who, due to his anti-Catholic tendencies, fell out of favor with James VI/I (Hakewill's views didn't match well with the Spanish Match). This is his masterwork, a book read and enjoyed by Pepys, a book which (according to Boswell) influenced Dr. Johnson's prose style, and which (at least according to a story popular since the nineteenth century) influenced Milton, as well. But I'm not concerned with anything beyond the title-page here -- take a closer look, and you'll see a number of funny things going on: 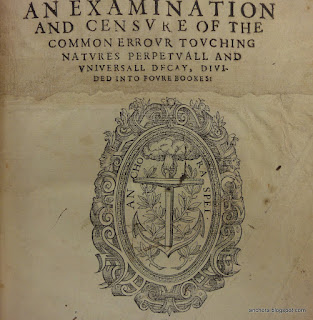 First, the page looks as if it has been torn and repaired, just above the device (above), and second, an assiduous librarian has taken a pencil to the imprint (below):

"Hakewill, George" has been written in, "London" has been crossed out in favor of "Oxford," and the rest of the imprint has been crossed out, to be replaced only by the proper date of the book, "1627" (rather than 1607). These alterations were necessary (at least in the eyes of a nameless librarian from the past) because the author's name is not listed on the title-page, and because the imprint is completely wrong -- at least, the imprint is completely wrong if you look at the online catalog record (here) which seems to have been lifted straight from OCLC. The catalog record does identify the book, providing the information that is lacking here -- but it bears no relation to the copy in our collection. And the reason it bears no relation to our copy is that the title-page has been altered -- the anchor device and the imprint do not belong to this book, as you can see more easily from the verso of the title-page: 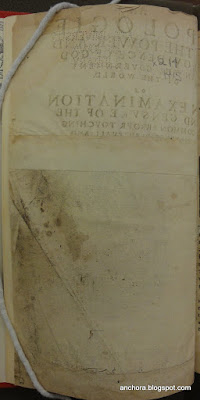 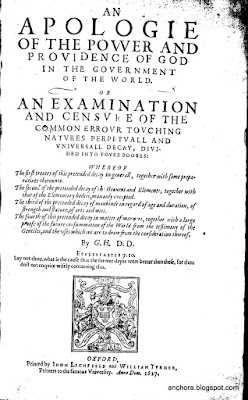 The title-page of the Hakewill book was at some point damaged just below the title (under the final line, and just above the italicized "WHEREOF") whether accidentally, or purposefully -- and it was repaired (quite purposefully) with an entirely different page. The new page shows a large, attractive version of Richard Field's well-known anchor device (I discussed Field briefly here). The motto on the anchor device reads "ANCHORA SPEI" which translates to "anchor of hope" -- a common expression (not to mention shop sign) that could refer to the spare anchor on a ship (the "hope anchor") and which ultimately derives from Paul's epistle to the Hebrews (6:19-20) where he writes of hope as the anchor of the soul. (Field's device is more well-known to non-anchor-loving scholars and book historians as the device which appears on the first printed editions of both of Shakespeare's narrative poems). Field was one of the more skilled printers working in London, and the publishers listed with him in the imprint weren't too shabby, either -- John Norton and Simon Waterson were two of the most important stationers working in the trade at the time.

The book from which the device was taken was thus surely an impressive one, and to match the format of the Hakewill book it would need to be a folio, as well -- and sure enough, it is: 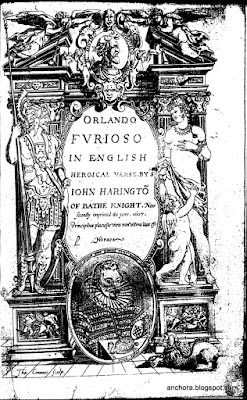 This is the title-page for the second edition of Sir John Harington's translation of Orlando Furioso (1607), a book for which Field held a patent to produce. (I discussed some of the more salacious bits of Harington's book here). The final page of the book is a handsome colophon that should look familiar: 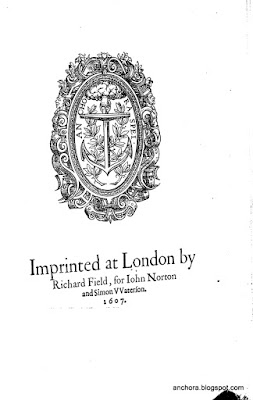 So, at some point an owner of the Hakewill book, faced either with a torn folio title-page, or an affinity for anchors (or both), took this colophon page and used it to repair -- and indeed, to enhance -- the appearance of Hakewill's religious treatise.

In a previous post it was clear that title-page devices could be of interest to early readers (that one was even armed with a pair of scissors). In the past few years, I've come across enough evidence to show, quite clearly, that a number of early readers (or owners, or users, or at least viewers of books) were intrigued with such devices -- as were the stationers themselves, who often carefully and purposefully chose the device that would represent them professionally. I've seen all sorts of interactions with title-page devices -- commentaries, attempts to practice drawing by reproducing the image, etc. -- but I don't ever recall seeing something quite like this. The brand of book history I practice was at one point derided as "title-page studies" (as opposed, of course, to more properly literary studies) -- but as this shows, it turns out there's more to title-pages than (at first) meets the eye.

There's another, more far-reaching lesson here, though: the importance of noting copy-specific information in catalog entries, rather than reproducing a "standard" entry that doesn't do the copy justice. This is another way of saying that we all can't wait for the online ESTC to start accepting user-generated copy-specific descriptions!


Finally, just for your enjoyment, I'll include a couple of pictures that show the subsequent history of the Hakewill book, which was altered in the mid-twentieth century in a way that doesn't quite enhance the appearance in the same way as the title-page -- a re-binding (in bright red!) with a binder's stamp worthy of the "blog" of "unnecessary" quotation marks (as opposed to necessary quotation marks): 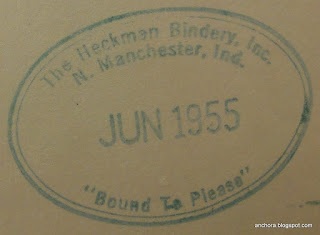