We have just finished the first week of the new semester here in Iowa. As for many, the start of the fall semester is the only date on the academic calendar that feels as if something new is starting--or that at least contains some degree of anticipation. (Our "spring" term begins in the dead of January winter, when everyone feels like lamenting a lost existence along with Falstaff and Shallow). It is also the moment when we professors start doing that most visible aspect of our job--teaching the thousands of students who have recently returned. Of course, we've been preparing to do this part of our jobs for weeks (if not months!) beforehand, labor that is often lost and invisible to those unfamiliar with what it takes to plan and prepare for this kind of teaching.

The end of summer also brings to an end the survey of our STC collection, a task that has taken my intrepid undergraduate researcher Rachel the better part of eight months (with a bit more aggregating and updating our database to come). We are finally at a point to start thinking about the collection as a whole--the patterns which have emerged, and in some cases the surprising patterns that have emerged from this page-by-page venture through every printed book in the library's Special Collections up to 1640.

Together, these two things--a new beginning of sorts, and an ending of sorts--lead me to what I'd like to discuss here: the way a book begins, and how that beginning is often lost or obscured by what happens to it afterward.
My brand of early modern book history was once derided by some (yet also reclaimed by its practitioners) as "title-page studies," an epithet that defines the field as one which focuses on the seemingly superficial cover of a book (one aimed at advertising and marketing the book within the unseemly world of commerce) rather than the precious literary text enclosed within.That might be a slight exaggeration, but it adequately defines one particular view--one that, I'm glad to say, doesn't really ring true anymore, since this brand of scholarship is now well-beyond well-established (some might even say it's gone to the other side of the spectrum and is now annoyingly domineering). Anyone who has spent any time at all playing around with the DEEP database knows how the information gleaned from title-pages can open up entirely new areas of inquiry--and that group includes my students, who, with relatively little knowledge of early modern printed plays, manage to come up with some startlingly original questions.

And of course we contemporary scholars are not the only ones who have valued title-pages over time--their value for Shakespeare's contemporaries is clear from the plethora of allusions to the proliferation of title-pages on every available surface around London, a form of advertisement as significant as it was ephemeral, at least from our perspective. There is another way to see how valuable title-pages once were, though, and it's a form of material evidence that, until our STC survey, I had rarely, if ever, experienced first-hand. The title-page was very often not the first page of the book; many books, especially smaller pamphlets (which may not have been bound immediately, or even intended to be bound at all) included a blank leaf which served to protect the precious title-page. We have six such pamphlets here at Iowa, all of which are clearly and unmistakably marked with a prominent signature: A1r. Here's one example, a pamphlet by John Hayward (who I wrote about previously here): 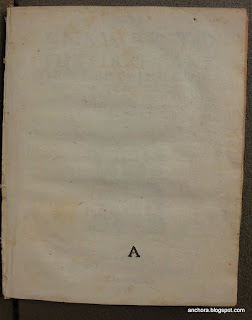 Turn the page, and you'll be greeted by the title-page: 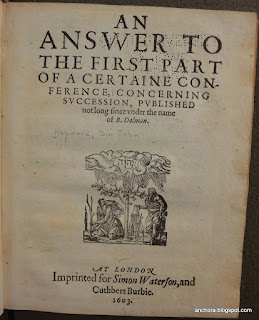 This is a small, unbound pamphlet which has nevertheless survived in nearly pristine condition (except for the seemingly pervasive perforated stamp inflicted on the title-page by the library, decades ago--just visible above, smack in the middle of the "ANSWER TO" you can just make out the words "State University of Iowa").

Another copy in excellent condition which, like the Hayward pamphlet, also happens to concern the monarch who took the throne in 1603, is the Declaration of Sports of King James (1618): 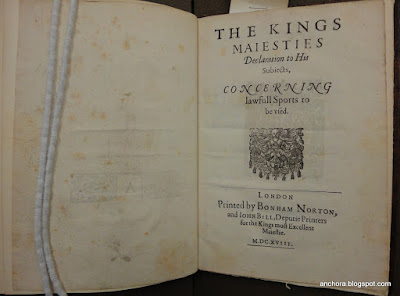 Turn back the page, and you can see a more elaborate signature for A1r: 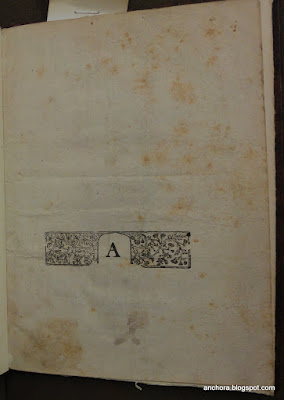 As you can see, this blank leaf has done its job well, absorbing a bit of damage over time, keeping the title-page proper mostly clean. Not all of our examples were so lucky, though; consider this small, stitched pamphlet, in which the A1 leaf has not only been damaged, but at some point completely detached: 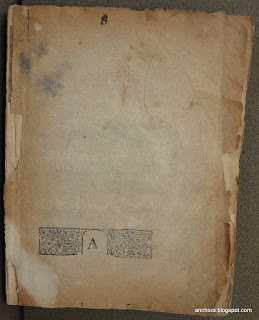 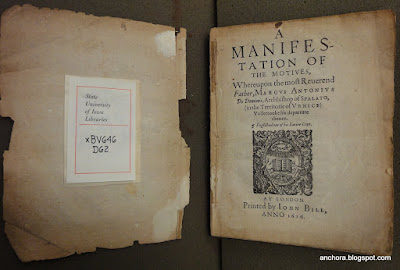 The ornament surrounding the "A" is exactly the same as the example above--and it presumably belonged to John Bill, the printer of both of these pamphlets.

Where did these initial blank leaves come from? A quick check of Gaskell's New Introduction to Bibliography shows that these leaves had become common by the 17th century--but they had originated, fittingly enough, from the earliest forms of the title-page: the blank leaves used to protect incunabula. Here's Gaskell in his own words:


It was common practice from early times to protect a book by leaving the first leaf blank, and it was this leaf that was made to serve the useful purpose of carrying a short-title of the book printed on it; which then developed into the full title-page announcing the title and author of the book, and soon giving the name of the printer and the place and date of publication as well (p. 52).

So the title-page evolved from blank leaves, which then, eventually, returned as a way to protect the title-page itself, which had become an integral and essential part of the book (and, of course, its marketing). Margaret M. Smith gives a much fuller account in The Title-page: Its Early Development, 1460-1510. Smith's survey of incunabula shows that nearly 30 percent of extant copies include a blank leaf; these leaves were a "practical, physical solution to one of the first outcomes of printing, the fact of multiple copies," since they could "protect a valuable product of the new process" (58).

The 17th century A1 pages could do more than simply protect the title-page, though, for in some cases they were more functional. In this example, the A1v page has been filled with a few "Certaine short notes touching some passages in the discourse": 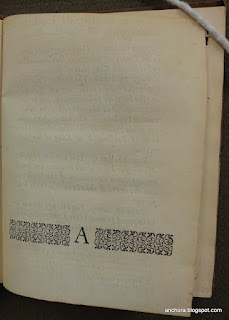 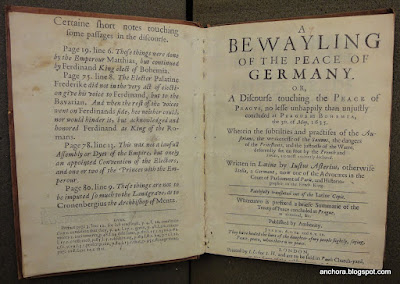 Another example perhaps more clearly shows the dual purpose of protection and elucidation, since the A1 leaf includes notes on the verso which explain the illustrated frontispiece, which precedes the title-page itself: 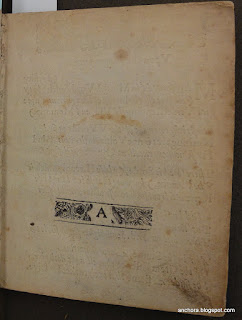 A1v includes the note "Vpon the Copper-piece" opposite, which consists of a busily entertaining engraving: 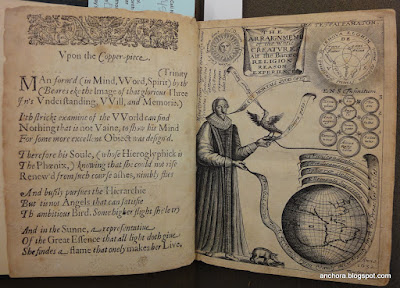 Turn the page again, and you finally reach the information that tells you exactly what book this is: 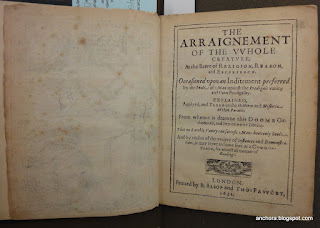 I was so surprised at seeing so many examples of the blank A1 leaf in our collection because I can't recall, at least with any specificity, seeing such a leaf before. It isn't hard to determine why; how many times (especially for those bibliographically inclined) have you seen a collation note that includes a variant on "A1 missing" or [A1]? I can't remember the number of times I've seen this--because, unsurprisingly, these initial blank leaves were easily and often lost. While Smith focuses on incunabula, her observations are still applicable to later books like the ones shown here:


It seems likely that at least some first leaves did become soiled and were cut away at the time of binding, in order to keep the first page of the book clean. However there are too many unknown factors, and too much time has passed, to be certain when or why leaves were removed. They  might have been removed because someone needed the paper for another purpose, or at rebinding, or because they bore marks of ownership that a later owner wanted to destroy. (56)

As you can see, the blank leaves in the first three examples survived (just barely, in the last one) because the slim pamphlets remained unbound; in the latter two examples, it survived because it was an integral part of the book, containing text on the verso which was necessary to understand what came after.

The sixth and final example from our collection shows that the blank A1 page could indeed move around. Here is the title-page: 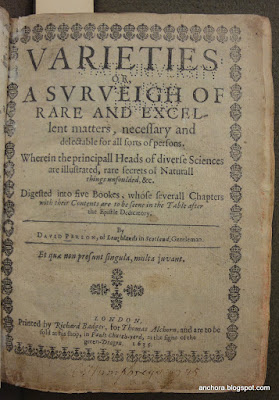 You can just make out a mark of ownership at the bottom (it seems to be "C Humphreys 1745") -- and, yet again, the old perforated stamp from the State University of Iowa smack in the middle of the title at the top. Turn the page, and you find a dedication: 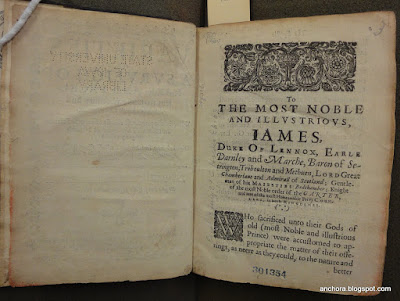 Opposite the verso of the final page of the dedication, you see something out of place: 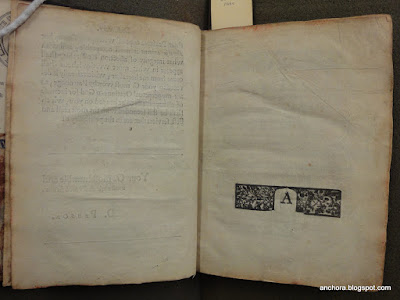 At some point, the A1 leaf has been inserted here, after the dedication, and just before the dedicatory poems that follow. The ESTC record notes that "The first leaf is blank except for signature-mark 'A' within an ornamental frame," which matches this page nicely. (Do you even have to ask if EEBO includes the blank leaf at the beginning?) Why this page was inserted here, and by whom, is impossible to tell--presumably, as Smith suggests, at binding or re-binding. But if you look closely at the verso, you can be absolutely sure that this blank leaf does indeed belong with this book, and that for a time, the leaf served its intended function as protection for the title-page. Here's the verso: 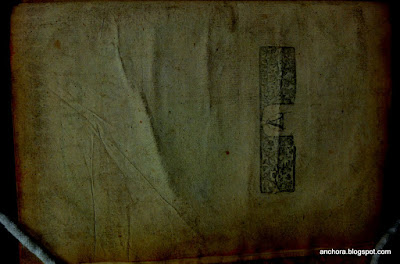 I've played around with a bit of photo-editing software to alter the color, so that you can (hopefully) more easily see the faint reverse-image of the title-page -- you can just make out the row of printer's ornaments and the "VARIETIES" at the left side of the image above, which appears at the top of the title-page. This is what Jeff Knight calls a "ghost image," in what I have to say is one of my new favorite articles, "Invisible Ink", which has left me constantly squinting at blank pages to see if I can find a trace of something. That ever-so-slight darkening of the page comes from prolonged contact, and, as Knight and the curators at the Huntington Library state, probably comes from either the oil in the ink, or perhaps its acidity, at least relative to the paper that makes up the blank leaf. Knight uses this to determine which books were once bound together that have since been broken apart; here, we can see that for a time, the A1 page occupied its proper position, but that at a later time, it was removed, moved, and re-bound.

The blank A1 leaf is unique in the sense that it is far more likely to include such a ghost image than other pages--due to its inherent position and function--but is far less likely to actually survive. And even if, as in this case, it does survive, the information we can glean from it is limited, beyond the mere fact that a blank cover page once existed for a specific book. (Unfortunately, unlike several examples mentioned by Smith, none of the blank A1 leaves we have includes any owners' marks, or any other forms of writing).

If the A1 leaf served its intended purpose, then it probably disappeared, one way or another--any trace of its material existence was removed, except for a protected, pristine title-page, the most valuable and visible part of a book.

Which reminds me: I've got lesson plans and class prep to finish up.
Posted by Unknown
Newer Post Older Post Home