In my previous post on the blank "A1" leaves that were sometimes used to protect the title-pages of early modern books, I missed an example from our collection. The reason that I missed it is because I had filed it away under "owner's marks," and so I'm quite pleased to see that, contrary to my earlier assertion, at least one of our blank A1 pages does indeed contain some form of writing. Here is the title-page of An Answere to Certaine Scandalous Papers, Scattered abroad vnder colour of a Catholicke Admonition (1606): 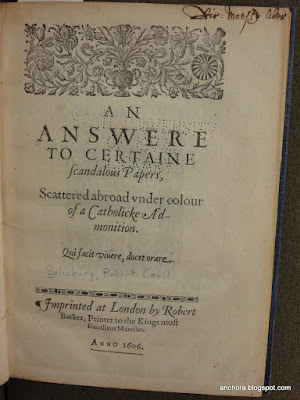 This tract was written in the wake of the Gundpowder Plot by Robert Cecil, the right-hand man of King James and, of course, the son of William Cecil, Lord Burghley. (The younger Cecil had recently been granted the title of earl of Salisbury, which explains the librarian's pencilled note visible on the title-page). An Answere was intended to justify the administration's attitude toward Catholic recusants in the heated polemical atmosphere that followed the attempted attack. Cecil's rhetorical strategy included a recitation of the death-threats he had received, due to his role in uncovering the conspiracy, and a separation of those Catholics loyal to the monarch from the extremist papists who had tried to explode the parliament building. Suffice it to say, this pamphlet would have been much in demand -- and indeed, it was quickly published abroad (in Dublin) and in a Latin translation.

As you can see from the image above, there is an owner's name written in the upper-right corner of the title-page, in a beautiful example of early-seventeenth-century secretary hand. Here's a closer look: 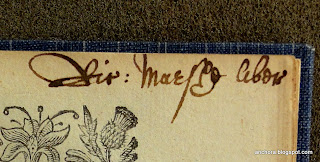 The owner's mark appears to be "Ric: Marshe liber" -- which would most likely translate as the standard statement of ownership "Richard Marshe's book" (although let me know if you have a better suggestion). On the previous page, on the recto of the blank A1 leaf, is a date and a title that, for the most part, reiterates the information on the title-page, but attributes the ostensibly anonymous pamphlet to Cecil: 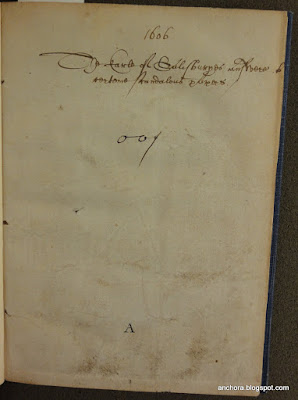 It is dated 1606 (the year the pamphlet was published) and states "The Earle of Salisburyes answere to certaine scandalous papers." Judging by the handwriting, I think it's safe to classify this as a contemporary note -- one that puts the relevant identifying information on what was, after all, the first page of this pamphlet (one that, according to a quick consultation of the ESTC record does not, typically, survive very often). In this case, then, the A1 blank seems to have frustrated the function of the proper title-page -- this owner, at least, felt it necessary to inscribe the title on the page that protected (and thus inhibited the view of) the title-page.

The owner read Cecil's pamphlet thoroughly, leaving a number of reader's marks throughout. The marks consist mostly of assiduous underlining, which, due to the polemical tone of the pamphlet, often reveals a bit more about the reader's interest than we might otherwise expect. Here are a few examples: 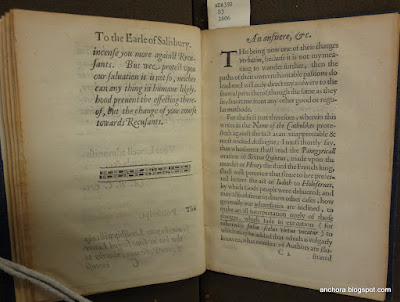 On the first page of the text, after the prefatory letters, the reader has underlined a warning to those who might willfully misinterpret the author's intent: those "adversaries" who are inclined to "make an ill interpretation onely of those thinges, which faile in execution."

The next example shows an interest in some of Cecil's more imaginative rhetoric: 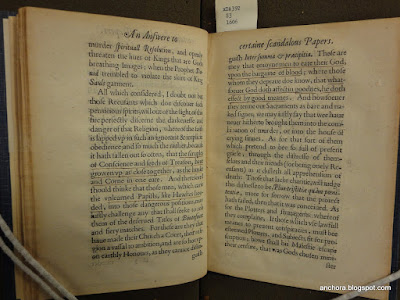 The underlined passage on the left reads "the scruples of Conscience and seeds of Treason, haue growen vp as close together, as the huske and Corne in one eare" -- and the reader has taken the time to add emphasis to the epithet "vnlearned Papists, like Hawkes hooded." On the right side, the reader has, perhaps unsurprisingly, underlined another jibe at Catholics: those who "enioyne men to eate their God, vpon the bargaine of blood" -- a characterization juxtaposed, through a not uncomplicated opposition, to "those whom they [i.e. Catholics] depraue," who know that "what-soeuer God doth affect in goodnes, he doth effect by good means."

The only marginal mark that goes beyond a simple act of underlining is a nice example of a trefoil, emphasizing a more lengthy passage that restates the doctrine of Jacobean absolutism: 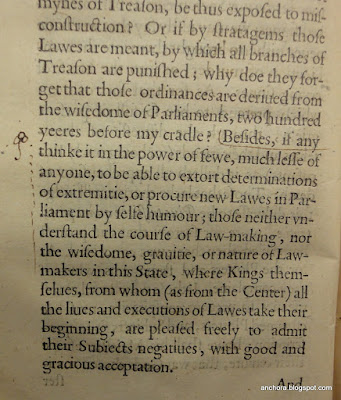 The reader and owner of this pointedly polemical pamphlet left no further indications of his identity, although the thoroughness with which he read it does show his political and religious affiliations -- and his commitment to interacting with the text, and, thereby, engaging in a debate over the repression (or expression) of religious belief following an attempted terrorist attack on the Jacobean state.
Posted by Unknown
Newer Post Older Post Home