Welcome to the latest edition of the (early modern) Carnivalesque -- Anchora is pleased to be taking time during this Thanksgiving week (at least here in the States) to give thanks for our favorite recent blog posts.

And to provide a fitting start, The Shakespeare Blog has a post on the mysterious Passionate Pilgrime (Thanksgiving is all about Pilgrims, right? Although Shakespeare wasn't exactly a wordy shipmate.) Thanks to that recent film that no one is giving thanks for, there's been much ado about Shakespeare and the various authorship conspiracy theories lately. Holger Syme at dispositio has been doing heroic work defending and explaining Shakespeare scholarship -- and indeed, the principles of early modern historical thinking and research itself. Start with the manifesto "Enough Already" (and be sure to look at the epic comment stream, with over 150 comments so far) -- and then proceed to the "Shakespearean Mythbusting" series (on the myths of Shakespeare's unsurpassed vocabulary and his astonishing erudition). Meanwhile, Shakespeare's England deconstructs the "educational" material designed to accompany the film (or is that indoctrinate its audiences?).

For a different take on authorship, Three Pipe Problem analyzes the attribution of The Judgment of Paris to Raphael.

The always enlightening Mercurius Politicus has a grumpy rant about a recent mention of everyone's favorite puritan William Prynne and his grumpy rants. My favorite among MP's recent posts, though, is a moving meditation on what, exactly, signatures can tell us ("Sign of the times") which looks at Henry Walker's signature confirming his apprenticeship in the Ironmongers' Company as a young man, upon moving to London, and another in a book he donated to the Company late in his life.

Anyone interested in anything early modern should be reading every post over at The Collation, the new group blog from the happiest place in North America, the Folger Shakespeare Library. A number of posts provide crucial research aids, such as understanding online catalog records, identifying "hidden" collections like the E. Williams watermark collection, or (my favorite) a primer on accession numbers that explains why those beautiful books in the header image are all on one shelf. And while you're there, be sure to check out Heather Wolfe's fabulous post on the seriously extensive marginalia in a book of heraldry.

Another post from The Collation urged us all to Remember, Remember, the Fifth of November -- as did In Pursuit of History. Meanwhile, Sarah Werner at Wynkyn de Worde looked at early modern women printers for Ada Lovelace day.

A happy day for book historians everywhere occurred this week: the release of the Universal Short Titel Catalogue. 8vo has an early review of the database.

The British Library's Digital Manuscripts site has (already!) just put its 500th manuscript online. The Houghton Library at Harvard announced a major acquisition of annotated books. In Oxford, The Conveyor reminds everyone of the treasures to be found beyond the Bodleian. Up at St. Andrews the series on fantastic bindings continues, the latest being a beautiful Icelandic bible. And another library, the Rare Book Collections @ Princeton has some great resources for finding provenance evidence online -- and you should take the time to check out their new blog, Notabilia, where you can find the following fantastic image of a news pedlar, c. 1640s: 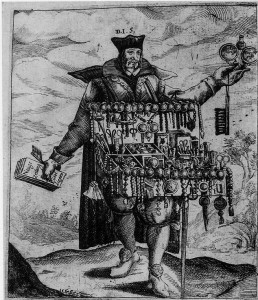 And speaking of the news, check out the new blog for the Early Modern News Networks project.

I'm no mathematician, which is perhaps why I appreciate The Renaissance Mathematicus so much, including this post on the diamond method of multiplication, which has finally explained those bizarre math problems we've all found in the margins and flyleaves of early modern books. On the topic of counting things, Wine Dark Sea has a series of illuminating posts on the statistical analysis of early modern linguistic features. Res Obscura gives us a suitable diversion by fooling the eye with trompe l'oeil.

Inspired by the ongoing Occupy movement, Early Modern Post has a fascinating post about speaking truth to power in a public space -- in this case, the preachers and protestors in Paul's Churchyard, where that most renowned of Deans of St. Paul's, John Donne, often broke with convention by preaching in the open air pulpit, at times against the vices of greed and arrogance.

The Conversion Narratives in Early Modern Europe project has a similarly relevant post, on the Eurozone crisis and religious history.

From a series on formidable Tudor women, Harlots, Harpies and Harridans has a post on Margaret Beaufort, the mother of the first Tudor monarch, Henry VII, who was notable for far more than simply being the mother of a king. At the other end of the spectrum of formidable women, over at the Georgian Bawdy House, a.k.a. Ms B-d's School of Venus, you can read about the so-called Ape-Gentlewoman, which features the best instance of the phrase "cum privilegio" I've seen in a long, long while. 8vo looks at the first illustrated book on witchcraft, which likewise features some hybrid creatures. And The Early Modern World features Mermaids and Mermen. 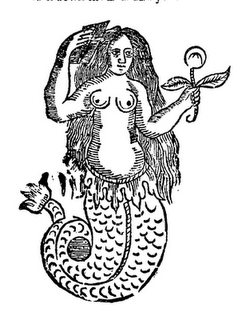 Outlining the consequences of disreputable behavior, The Chirurgeon's Apprentice told the story of the "deadly nevergreen," the scaffold at Tyburn that served as the end for many an early modern criminal, while Executed Today looked at one of those criminals, William Guest, a minister's son who was guilty of some white-collar crime while working at the Bank of England. Shakespeare's England takes a look at hanging witches at Tyburn, while ReScript tells the tale of two pirates.

And finally, would the Carnivalesque be complete without this? I think not.

The carnival will be taking a brief break in December, but will return in January 2012 -- and finally, thanks again to the doyenne of Carnivalesque Sharon Howard!