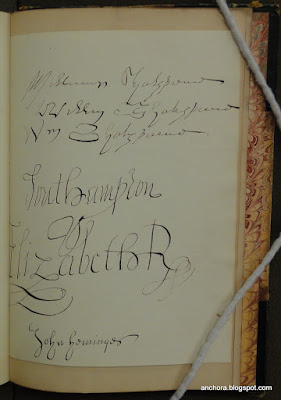 What you see here is not, alas, evidence that Shakespeare, his patron the earl of Southampton, his fellow actor and sharer John Heminges, and Queen Elizabeth herself all got together one day in order to practice their signatures on the same sheet of paper. But it is a real piece of historical evidence -- an authentic and authenticated Shakespearean forgery, created (by request!) by the famous forger William Henry Ireland.

The Ireland forgeries of the late-eighteenth century are perhaps the most infamous instance of Shakespearean fakery, and the story of how young William Henry, in a bid to please his domineering and distant father, forged a plethora of historical documents related to Shakespeare has been told and re-told many a time. The Ireland forgeries were created just as biographical interest in Shakespeare began to peak for the first time -- it's a crucial episode in the history of Shakespearean biography and authorship, since it so clearly shows how far the desire for documentary evidence of Shakespeare's life overwhelmed (and indeed, produced!) the seemingly paltry historical record. Ireland simply provided the evidence that Shakespeare editors and scholars -- Edmund Malone foremost among them -- desperately wanted to find. Of course, Malone, et. al., weren't simply looking for evidence of the historical William Shakespeare -- they were looking for evidence that would support Shakespeare's newfound status as the national literary genius -- and Ireland was all too happy to both oblige and capitalize on this desire.

He didn't stop at "finding" records, though, for Ireland also "found" a lost Shakespeare play, Vortigern, which received a legendary (and legendarily disastrous) production early in 1796, in what would prove to be the denouement of the forgery fiasco. Facsimiles of the forgeries had been published a few months earlier, and doubts of their authenticity followed almost immediately. Malone's own damning exposure of the forgeries was published just days before Vortigern was laughed out of the theatre during its first performance.

In the image above we see three different versions of Shakespeare's signature, while the remaining signatures are examples from documents Ireland "discovered": letters from Southampton and Elizabeth to Shakespeare, and theatrical contracts signed by one of Shakespeare's partners. These signatures were produced by Ireland at the request of a curious admirer, years after the forgeries had been sensationally exposed. (Ireland remained proud of his, ahem, accomplishments for the rest of his life, and often produced new examples of his famous forgeries). As you can see, this page of signatures is bound into a book--a book which happens to be the first edition of Vortigern, published in 1799, more than three years after Ireland first "found" the play. Here's the title-page of one of the three copies of the 1799 edition in the Iowa Special Collections library: 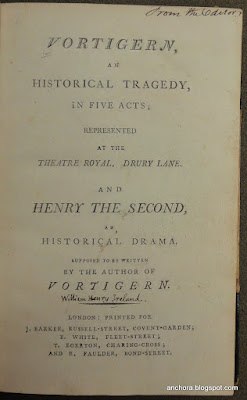 As you can see, Ireland's name has been written in just above the imprint, and from the detail of the upper-right corner, you can also see the (slightly trimmed) phrase "From the Editor" (as Ireland styled himself in the preface): 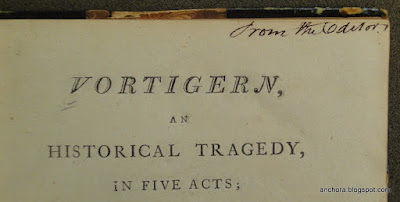 The recto of the previous flyleaf gives a bit more info about this copy and its owner: 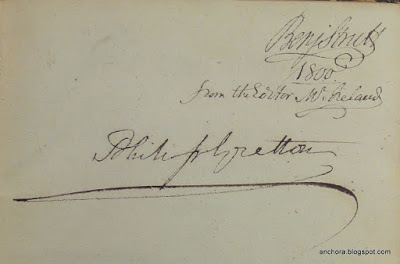 The signature at the top seems to be "Benj Stuitt" and is dated 1800, "from the Editor W. Ireland." (There is also a lower, larger signature which appears to be "Philip Wretton" [?] which may be a subsequent owner; all three of the copies at Iowa came from the collection of the early-twentieth century scholar J. Hubert Scott).

At the end of the volume, which also includes another "lost" Shakespeare play written by Ireland, Henry II, Mr. B. Stuitt has bound in several manuscript leaves in the hand of William Henry Ireland himself -- a way for Ireland to both autograph and authenticate this particular printed edition of the infamous manuscripts he once created. Here's the note left at the end of the book: 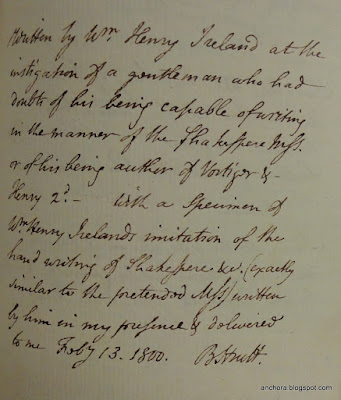 Written by Wm. Henry Ireland at the instigation of a gentleman who had doubts of his being capable of writing in the manner of the Shakespeare MSS. or of his being author of Vortigern & Henry 2.     With a specimen of Wm. Henry Irelands imitation of the handwriting of Shakespeare &c. (exactly similar to the pretended MSS) written by him in my presence & delivered to me Feby. 13. 1800.   B Stuitt.

It's the final phrase there that I find so interesting -- the owner of this book wanted to ensure that the (manuscript) Shakespeare forgeries bound into his (printed and published) Shakespeare forgery were authentic -- the signatures were "written by him [Ireland] in my presence." The forged documents had taken on a life of their own, as Ireland's authentic signatures were valued for the very fact of being famous fakes. (Having re-watched Orson Welles's F for Fake recently, this is not unlike the art forger Elmyr de Hory making a business out of being a well-known art forger. In fact, F for Fake -- a fantastic cinematic sleight-of-hand created by the man who pulled off the biggest fake of them all [which the inimitable Radiolab will tell you about here] should be required viewing for all scholars or enthusiasts of authorship, regardless of period).

The specimens solicited by the owner of this book were also a chance for Ireland to prove his worth as a forger -- that is, to prove that he was an authentic forger. The key phrase here is from the unnamed gentleman, who "doubts of his [Ireland's] being capable of writing in the manner" of the Shakespeare manuscripts, or "of his being author of Vortigern & Henry 2." How fitting that Ireland, who fulfilled (by faking) the desire for authentic Shakespearean manuscripts should have the authenticity of his fakes questioned! Ireland complied with this request by writing out several pages of a historical drama on the reign of Louis XVI -- a history play covering rather more recent ground than his Henry II (Louis was executed only a few years prior in 1793; Henry II of England ruled in the twelfth century). Ireland spent several years in France as a child, and would subsequently live there for several years after his imprisonment for debt a decade after the Shakespeare forgeries; he also wrote several works on the history and culture of France, so beyond the episode's currency as recent history, the material would have been well-known to him.

I'm not going to transcribe this dramatic specimen here -- that's for another time -- but I will include all the images, so you can take a look for yourself. Here's the "Persons herein reprsented," including Louis XVI and, of course, Marie Antoinette: 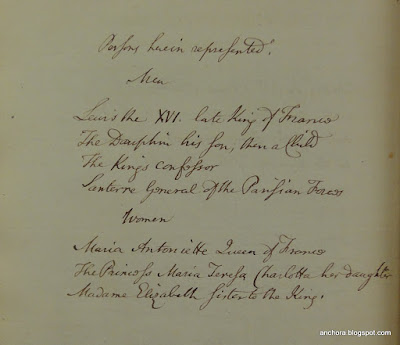 The extract begins with a lengthy soliloquy by the King himself, in prison, as he laments his fate: 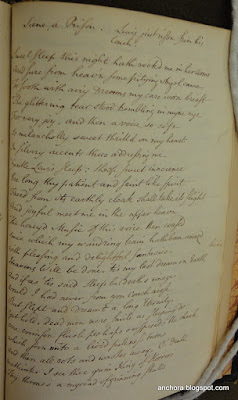 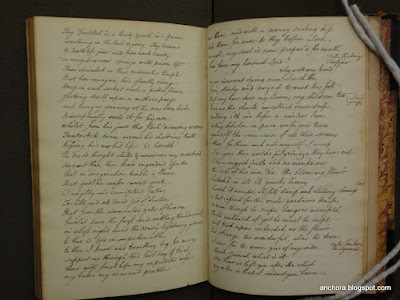 The King's confessor enters, followed by his jailer, Santerre, and eventually by the Queen: 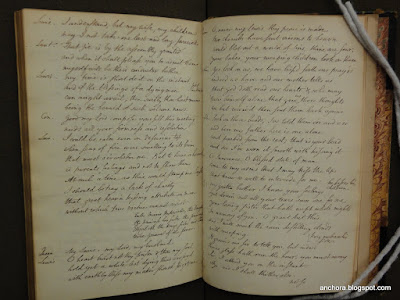 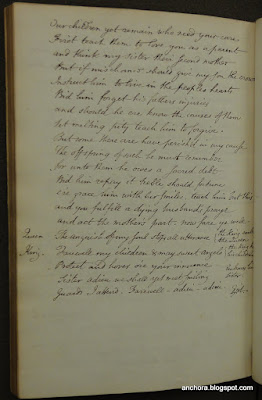 The scene ends with the King's melodramatic farewell to his Queen and his children, to whom he utters a pseudo-Shakespearean line that may evoke a rather more authentic Shakespearean utterance: "may sweet angels protect and hover o'er your innocence." The literary quality of this dramatic specimen may not sound terribly Shakespearean to our ears, but it is a good example of Ireland's Shakespeare. Ireland himself remained proud of his fabrications, particularly Henry II, which he quoted from approvingly in the memoir he would publish a few years later.

The owner of this book was not simply interested in his authenticated manuscript forgeries, though, for there are examples of marginalia throughout the printed portion of this volume, in both Vortigern and Henry II, showing that this copy was closely read. Examples range from the simplest of corrections to remarks on the Shakespearean echoes in Ireland's ("Shakespeare") plays.

Here's a simple correction, substituting "Sons" for the underlined "Brothers.": 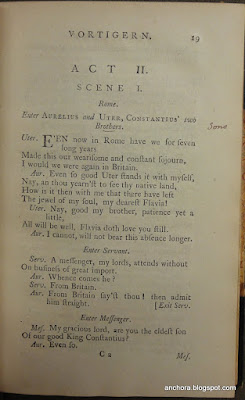 A more significant comment can be seen at the bottom of this page (see the detail below) which identifies a parallel with King Lear: 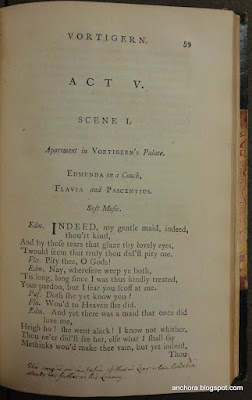 In Henry II, the owner has expressed surprise -- marked with three (!!!) exclamation points -- at the promotion of one character to the position of secretary to the Archdeacon:

And on this same page, the owner has also identified the influence of Hamlet, noted in the margin (the lines do have some resemblance to dialogue from the closet scene, when Hamlet confronts Gertrude in what we usually label Act 3, scene 4): 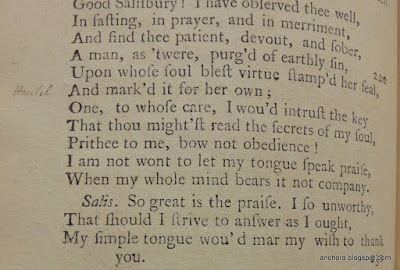 This may be my favorite book in our collection here, since it gives us such direct access to a scene, and to a sense, of authorship (or is that forgery?) that is at once foreign and utterly familiar to us. There may be no better demonstration of the depth and significance of our investment in Shakespeare -- and indeed in the concepts of authorship and authenticity -- than this authentic fake.
Posted by Unknown
Newer Post Older Post Home