I once came across the following local headline: "Anti-bacon billboard to go up in Des Moines." I work at the University of Iowa, so this was not unexpected, considering the local industry -- but my mind turned to Shakespearean authorship conspiracy theories Before the earl of Oxford became the darling of the anti-historical conspiracy set, it was Francis Bacon who carried the day. One reader of the Iowa copy of Edmund Spenser's 1617 Works was particularly interested in attempting to identify the hand of Francis Bacon

The story of how the politician and philosopher Francis Bacon was identified as the supposed man behind Shakespeare is entertaining, from a madwoman trying to dig up Shakespeare's grave -- the coincidentally named Delia Bacon -- to cryptographers that ended up serving in world wars.This story is told in James Shapiro's Contested Will, so I will not rehearse it here; suffice it to say, by refusing to take the easy route of parody and caricature, Shapiro shows that there was far more to Delia Bacon, and hence to the Baconian theory, than simply madness (although to be fair, there was a fair share of that, too). Delia Bacon was interested in her eponymous predecessor's radical political agenda, and Delia can in some sense be considered a proto-New Historicist, reading Shakespeare's plays to find evidence of a subversive political intent. However far afield this mode of reading eventually led her, it was far better than subsequent Baconians, who looked at Shakespeare's plays (and other literary works) only for "evidence" of secret cyphers inserted by Bacon himself, so that, the theory goes, one day a suitable textual detective would come along and find his hidden name. This reduces a play to nothing more than a conduit for a secret message, with the occasional representation of a contemporary political figure as an added bonus. It is an astonishingly reductive, unproductive, and misguided way to read a text.

And on top of that, sometimes Baconians chose maddening colors of ink to carry out their cryptography.

In an earlier post on Spenser's Shepheardes Calender I lamented some of the ways in which the complicated paratext of that work has often been (and continues to be) ignored, overlooked, or misunderstood. My main focus in that earlier post was the way Spenser's paratext is often reproduced and obscured -- from fine press productions like those of William Morris, to modern critical editions. There I noted that in the Iowa copy of Spenser's 1617 works (here is the online catalog record) an owner had indeed paid attention to the paratext of the Shepheardes Calender, just not in the way a bibliophile or scholar would wish: there are annotations in the eclogues and the glosses of "E.K." in a striking shade of pink ink, which shows that this annotator was marking up this early modern book sometime in the 20th century.

Some of the annotations take the form of simple underlining -- mostly the names of Spenser's shepherds, or their real-life counterparts, such as Spenser's friend Gabriel Harvey, who is represented as Hobbinol in Spenser's text (you can see the underlining in the top left corner): 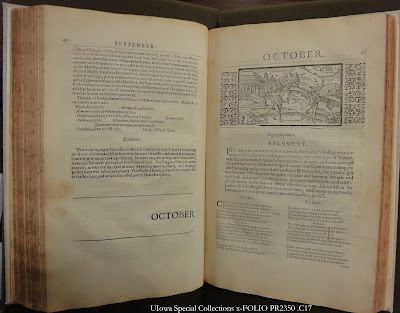 Here you can see the name of the woman Colin Clout -- that is, Spenser's poetic persona -- pines after:

As you can see, Spenser's penchant for toying with the conventions of naming and identity attracted the attention of this reader: the underlined phrase here is a note from the gloss, "Rosalinde, is also a fained name, which being well ordered, will bewray the very name of his loue and Mistresse." Spenser is both asking the reader to attempt to determine the "real" identity of "Rosalinde," and frustrating that attempt at the same time.

This reader here had bigger things on his or her mind, though: the most extensive annotations occur in the very first note in the January gloss: 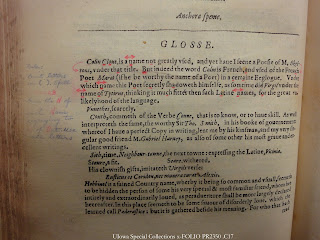 The notes in the left margin are hard to make out -- and I'm not going down the rabbit hole of Baconian cryptography to find out exactly what method is being used here -- but it is clear that certain letters are picked out which seem to spell out the name "BACON" (at least backwards, or in some kind of jumbled order). I didn't give much thought to why a Baconian was looking for cyphers in Spenser, rather than in Shakespeare. But here is the key bit of underlining: 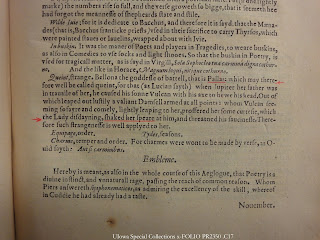 You can see the (pink!) arrow in the left margin, pointing to the phrase "shaked her speare" -- so this reader subscribed to some form of the Bacon-was-Shakespeare theory. I found a written reference on a loose sheet of paper in this book, which cited an article in the journal Baconiana. Somewhat surprisingly, our library seems to have a pretty complete run of Baconiana, and the reference points straight to a brief article which you can see in full here: 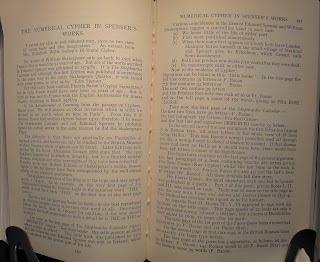 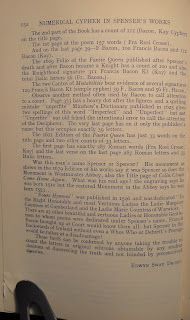 If you click on the images you can get a closer look, and if you do, you'll see that this is an attempt to prove that Bacon not only wrote Shakespeare, but Spenser as well (when, one wonders, did Bacon have the time to write Bacon?). The writer of this brief piece proceeds to poke through the Shepheardes Calender and The Faerie Queene, "proving" the existence of Baconian cyphers. Even though our pink annotator didn't seem to follow the specific instructions in this article, they were looking for similar kinds of cryptographic evidence -- if cyphers could be found in Spenser's works, then Bacon was Shakespeare and Bacon was Spenser; and, it follows, Spenser was Shakespeare, and vice versa, as well!

The really intriguing thing to my mind, though, is the fact that Edwyn Sway Drood, the author of this piece in Baconiana, paid careful attention to the material elements of Spenser's work -- the cyphers were "found" exclusively in the paratext to the Shepheardes Calender, and Drood stresses that these cyphers can only be discovered in the original editions, or at least facsimiles thereof. As he states, the "slightest alteration of Spelling or of the type used may simply wreck a Cypher." He also laments the inadequacy of Alexander Grosart's edition of Spenser (in this complaint he was certainly far from alone) concluding that "Exactly as in any Modern Edition of Shakespeare's works, beacon lights to the decipherer have been extinguished by the well meant efforts of the reverend gentlemen." If Delia Bacon was a proto-New Historicist, then some of her fellow Baconians can be considered forebears of the unediting movement.

This issue of Baconiana is dated July 1951, and the opening comment in the issue is remarkable, revealing the necessary political context to understand this bizarre obsession with proving that Francis Bacon was solely responsible for the golden age of English letters. 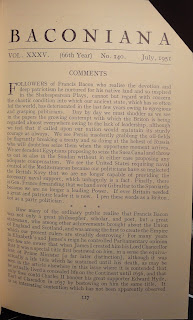 You can click on the image and read the full paragraph yourself, but the opening and closing should be enough to get the sentiment across. It begins:


Followers of Francis Bacon who realise the devotion and deep patriotism he nurtured for his native land and so inspired in the Shakespearean Plays, cannot but regard with concern the chaotic condition into which our ancient state, which has so often led the world, has deteriorated in the last few years owing to egregious and grasping politicians.

This is a sentiment that could be applied, with validity, at just about any time, although the writer here goes on to enumerate some of the exemplars of this chaos, including "Persia insolently grabbing the oil-fields ... at the behest of Russia" and the "decadent Egyptians proposing to seize the Suez Canal." The concluding sentence is a plea for help:


If ever Britain needed a great and patriotic leader it is now. I pen these words as a Briton, not as a party politician.

If you haven't guessed where this was leading, the next paragraph begins by lauding Bacon's skill as a statesman in his own time. The obsession with Bacon, then, is a form of nationalistic nostalgia, a yearning for an idealized, innocent, earlier state. It is simply another form of the (often retrograde) desires that would motivate the supporters of the earl of Oxford, an aristocrat without the taint of the commons possessed by Shakespeare. These are anti-historical desires (and prejudices), even as they are comprehensible -- and, as some of the book history of Mr. Drood shows us, even at times forward-thinking, if almost inadvertently so. We can recognize the occasional value, and the certain fascination, in these kinds of desires and the conspiracy theories they produce, but it is also our responsibility to articulate why and how these desires and theories are damaging and counterproductive. Perhaps an anti-Bacon billboard isn't such a bad idea after all.
Posted by Unknown
Newer Post Older Post Home