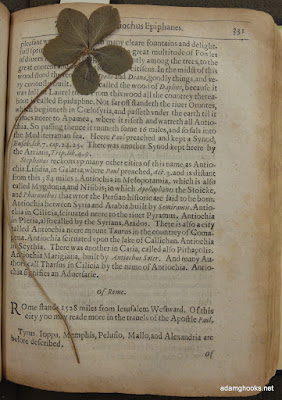 In a previous post I discussed how a book could serve merely as a container that houses and protects a piece of paper entirely unrelated to the actual content of the book (in that case, some biblical notes and math problems). In this example we have something altogether more pleasing than math problems -- a pressed and preserved flower.


The book in which this flower is housed is an English translation of a kind of scriptural travelogue, called the Itinerarivm Totivs Sacrae, originally by Heinrich (or, as the title-page here puts it, "Henry") Bunting, and translated as The Trauels of the holy Patriarchs, Prophets, Iudges, Kings, our Sauiour Christ, and his Apostles, as they are related in the Old and New Testament, by one "R.B." 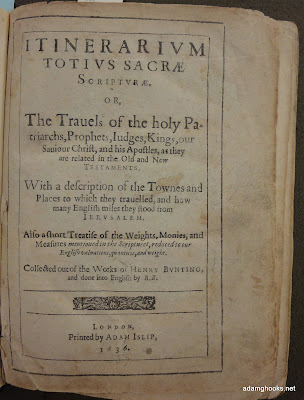 This is the 1636 edition (InfoHawk record here) which, according to the ESTC, is the fourth English edition (it was first published on the Continent in the late-sixteenth century). As a prefatory note to the reader says, "R.B." though it worthwhile to "haue the Typograhicall description of the Townes and places, as they are mentioned in the Scriptures," so that one "might the better vnderstand the Prophets, and perceiue the wonderfull prouidence of God." For the benefit of the reader, "R.B." has not only translated the text into English, but, as you can see from the title-page above, and as he reiterates, "to make this a Perfect worke" he has also included a "discourse concerning the weights, measures, and monies which are mentioned in the Scriptures, reduced vnto our valuation."

The intent of the book, then, is to provide practical aids to readers detailing the geography of the scriptures, and explaining the various units of measure and currencies in the scriptures by translating them into values the English reader could understand. If the owners and readers of this copy used it for that purpose, they left no visible evidence. At some point, though, someone did use the book to preserve that flower. This is not an uncommon occurrence--readers left all sorts of objects in their books, purposefully and carelessly--which points to the little known fact that a true bibliographer needs to have a working knowledge of botany.

I'm no botanist, but I know just enough to determine that, indeed, there is no connection between the flower and the page opening in which is preserved. Here are a couple more images of the page opening, so you can see the text for yourself: 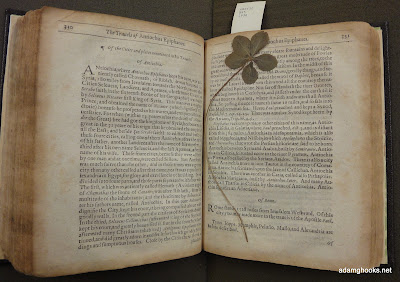 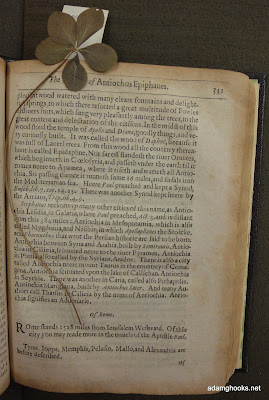 In the image directly above, I've shifted the flower so that you can read the full text -- which does mention the preponderance of laurel trees in "Antiochia," as it is called. Again, I'm no botanist, but those are not leaves from the laurel trees, and laurel flowers are cupped and white. (If anyone has any ideas what plant this comes from, I'd love to know). So we can just enjoy this as a particularly charming use of a book.

At least one early reader did pay attention to part of the text. As you can see below, someone has used the final bit of text for handwriting practice, copying out the final lines twice: 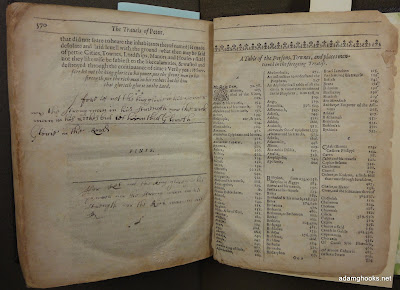 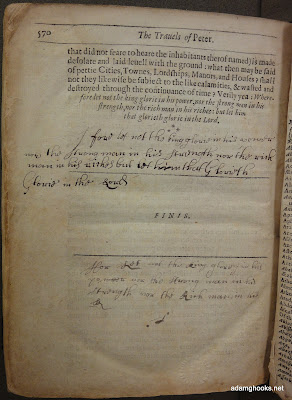 The copyist has chosen only the italicized portion (a paraphrase from Jeremiah, ch. 9, as best as I can tell) to repeat, twice--well, nearly twice, since the second version cuts off just before the end:

And that isn't all -- at the top of the final verso is written a single word: 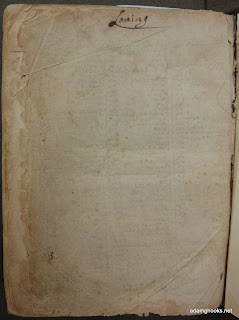 "Loving" -- why "Loving"? This is the spot where you would expect to find a mark of ownership, and that's what "Loving" might be in this instance: Loving (or various variants thereof) is an established surname in England. So there you have it: three completely common ways to use a book -- as a storage container of sorts, in this case to press a flower; as handwriting practice; and to mark one's ownership -- which, taken together, make this a suggestively lovely book.
Posted by Unknown
Newer Post Older Post Home