Last week, thanks to the English department, the UI Center for the Book, and Philological Quarterly, we were fortunate to host David Scott Kastan from Yale University. Kastan's formal lecture, called "The Body of the Text," traced the presence of early modern authors (or the lack thereof) in their published works, using evidence from title-pages, paratexts, and, punning on the title, the body of the text itself. His central case study was John Donne, whose body was, and has continued to be, an object of fascination to audiences, readers, scholars, and admirers. The flyer for the event featured this well-known image, which Kastan examined in his talk: the haunting portrait of Donne in his funeral shroud which served as the frontispiece to his final sermon, Deaths Duell. 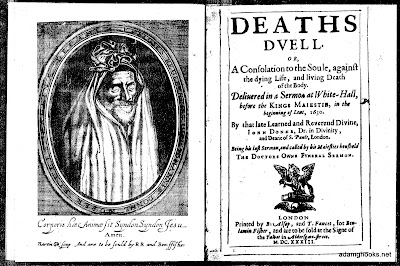 Here the text is prefaced with Donne's body, heightening the identification between author and work (or text) -- indeed, it is an act of conservation and consecration, preserving the memory and the presence of "the late Learned and Reverend Divine, John Donne, Dr. in Divinity and Deane of S. Pauls, London" as the title-page states. Part of Kastan's point was to show that as a preacher, Donne was familiar as a published author -- his sermons are clearly attributed to him, as you can see from this example from Iowa's Special Collections library, which just happens to have a copy of a Donne sermon: 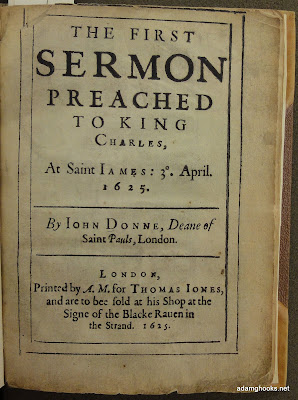 As a poet, however, Donne's body and identity were far more circumspect. Kastan talked at length about the 1633 edition of Donne's Poems, which was attributed on the title-page only to "J.D." as you can see here from the UPenn copy (available online here).

The poems are accompanied by "Elegies on the Authors Death," which of course do prominently mention (and cleverly exploit) Donne's name. However, on the title-page his name is withheld. Why was this done? One answer is that initials were commonly used on title-pages, and here could have resulted from a variety of factors, including Donne's notoriety as a coterie poet (attracting those who knew exactly who "J.D." was) and his ambivalence toward print (even though this volume was posthumously published). But Kastan argued that the inclusion only of the initials was a strategy on the part of the publisher, in part because he was a skillful reader. In a collection of poems that so insistently stresses the distinctions between poetic presence and physical absence, the title-page echoes (or introduces?) the persistent acts of withholding readers would encounter in Donne's poetry.

As Kastan showed, though, some readers were not satisfied with the bare initials on this title-page (and since his examples were show-stoppers, I'm not going to include them here). This does give me an excuse to show Iowa's copy of the 1633 Poems, which, along with our copy of the Shakespeare 2nd Folio, was the very first book the curator of rare books showed me when I arrived on campus. At some point in this copy's history, a reader felt the need to identify "J.D." by writing in the last name of the poet: 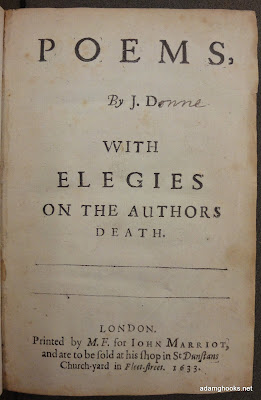 "J.D." has here become "J. Donne," as the annotator skillfully turns the final period into an "o" and then completes the name. So in this copy, Donne the author (if not quite Donne's body) is more present than he would otherwise be. But this is not the only body in this text -- in the midst of Donne's elegy on Prince Henry, a reader (the same one?) has inserted a portrait of the unfortunate young prince: 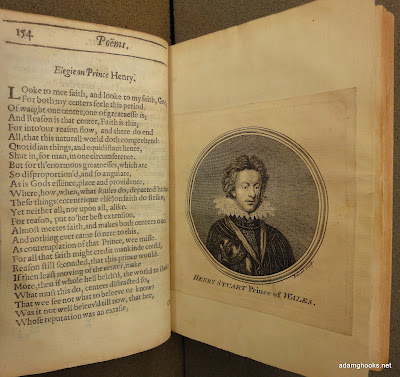 Donne is not the only one remembered, or conjured, or preserved within this book. This is an act of commemoration and contemplation, but it is in its way also a perceptive addition to a book which in so many ways can be described as elegiac.
Posted by Unknown
Newer Post Older Post Home