As I discussed at length in the previous posts linked to above, the Shakespeare Second Folio is one of the highlights in our Special Collections library here at Iowa, and indeed in some ways it symbolizes the presence and importance of Shakespeare on campus (as you can see in this photo and article featuring our renowned Shakespeare-in-performance expert Miriam Gilbert, who is shown holding it). The library doesn't own a copy of the coveted First Folio, let alone a copy of all four seventeenth-century editions of the folio (as some libraries do, a fact which they inevitably advertise and exploit) -- but as it turns out, we do own a piece of all four folios, as I recently (and accidentally) discovered. 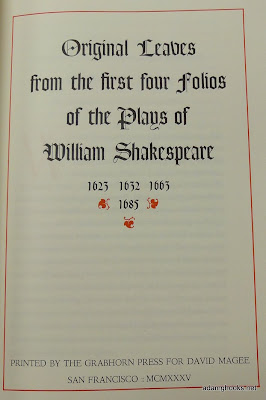 This book, published by the Grabhorn Press in 1935 (catalog record here), includes a single leaf from the four seventeenth-century folios of Shakespeare's plays -- leaves that have been liberated, in one way or another, from their original context in a bound-together book. Or, rather, the initially disconnected printed sheets that were bound together to make a book subsequently regained or were returned to their original state by being broken apart. (The awkward passivity of that last sentence emphasizes the fact that we don't know who was responsible for breaking these Shakespeares apart). What we do know is that this particular book of leaves remains valuable: a copy recently sold at Christie's for nearly $4000.

Fragments of the First Folio are both legion and troublesome, even (or especially) for the new worldwide census of First Folio copies. In the second volume of The Shakespeare First Folio: The History of the Book, Anthony James West devotes a few pages (315-324) to a discussion of Folio fragments, which do not feature in his census. As he states, to be considered a "complete" copy, a volume must have at least 50% of its leaves intact; anything less is classified as a fragment, and fragments were not systematically searched for, and appear to be widely scattered -- facts with profound implications for our understanding of the Folio's print run and survival rates, for changing attitudes towards preservation and conservation, and (see below) for variants in the texts of the plays.

West quotes a letter from John Wolfson, who had a long career dealing in fragments of the First Folio; Wolfson describes a flourishing trade in fragments, which could be sold (or given away) as fragments, or used to "make up" a complete copy of a Folio. Citing the trade in leaves taken from the Gutenberg Bible, Wolfson writes that "I assumed that there would be an interest in sets of leaves from the Shakespeare Folios" (319), and he did sell several sets himself. There is in fact a direct connection, of sorts, between the First Folio fragments and the Gutenberg Bible: West also describes several copies of a leaf book published in 1926 (less then a decade before the Grabhorn volume) called A Noble Fragment, Being a Leaf of the Original First Folio of William Shakespeare's Plays Printed in 1623, with a Bibliographical Essay by Seymour De Ricci (the Folger has several copies, including this one with De Ricci's manuscript draft of his essay). The title caught my attention, since one of the items I often show my classes is a leaf from the Gutenberg Bible, also called A Noble Fragment, published in 1921 (catalog record here; this will get a post of its own).

I came across the online catalog record for the Grabhorn leaf book by chance, as I was looking for a couple of books on the production of the First Folio written by Edwin Eliott Willoughby, namely his relatively influential The Printing of the First Folio of Shakespeare (1932), and his less well-known, but far more entertaining A Printer of Shakespeare: The Books and Times of William Jaggard (1934). (The Folio was produced in the Jaggard printing-house; head over to The Crooke Book for an enthusiastic account of Willoughby's style in the post A Printer of Shakespeare). Willoughby's published work on the Shakespeare Folio came early in his career (a brief bio can be found here) and led to his position as the "chief bibliographer" at the institution most associated with the Folio, the Folger Shakespeare library (he headed the effort to create the first card catalog at the Folger and would work there for over twenty years). In 1935, the year he started at the Folger, Willoughby contributed the introduction to the leaf book from the Grabhorn Press -- which is how I found the book in the catalog. (Fitting, eh?)

Willoughby's introduction is mostly standard stuff, and he recounts what is still the conventional narrative of the Folio's production, with the occasional stylistic flourish: when describing the attempt of Heminge and Condell to secure a publisher for their venture, he writes that their "predicament" was similar to that which would confront


the friends of a recently deceased popular writer of detective stories of our own day, who would almost certainly find many publishers glad to publish a posthumous novel of the author but few or none willing to undertake the publication of an expensive memorial edition of his works.

This isn't a bad comparison; we know that individual quartos of Shakespeare's most popular plays (Hamlet and Romeo and Juliet among them) appeared alongside the Folio, and continued to be reprinted throughout the century. Willoughby does express the familiar symptoms of foliomania -- he calls the First Folio a "priceless gift" and decrees that readers of this leaf book possess "a priceless relic." The term "relic" is entirely appropriate here: it echoes the prefatory matter of Heminge and Condell, where they identify the "remains" of Shakespeare with the book itself; and in the absence of the entire "priceless gift" collectors can at least own a piece of it -- indeed, citing the theory that some of the plays in the First Folio were printed from authorial manuscripts, Willoughby claims that "one of the leaves of this volume, then, has been printed by hands which held the 'unblotted papers' of the Master Poet himself."

Willoughby also cites "another type of treasure," though -- one which from a twenty-first century view is perversely anathema to the project of breaking apart Shakespeare folios. Willoughby explains the process of proof-correction in the early modern printing house, which all but ensured that every copy of a book would differ from every other copy, due to the varying combinations of corrected and uncorrected sheets. As he writes,


It is possible, therefore, that some of the Folio leaves of this book may be variants from normal. The reader may spend a pleasant hour or two comparing his leaves with those reproduced in a standard facsimile ...

... an uncorrected leaf may contain an old fashioned spelling (which Shakespeare probably used), a stage direction which gives the name of one of the members of Shakespeare's troupe instead of the character which he took, or even possibly a true Shakespearean reading which the proof-reader, not understanding, changed.

I have not collated the leaves in this book for variants -- though I have included images of all four leaves below, in case you would like to spend "a pleasant hour or two" doing so. The irony is that fragments of the Folio, especially single leaves, have not been cataloged in a Folio census (which, at any rate, would be nearly impossible) and so any variants that may exist in those fragments have not -- and will not -- be found.

What follows here are images of all four leaves. For the first set I've included the facsimile of the Folio title-page, which the book reproduces for all four folios:

The leaf from the First Folio is taken from Much Ado About Nothing: 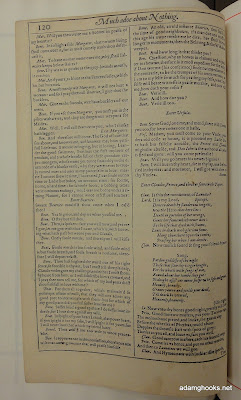 As luck would have it, the leaf from the Second Folio of 1632 is from King John, which is the same play that exists as a (complete) fragment in the Iowa collection (I discussed that fragment in part 1 of "Breaking Shakespeare Apart"). 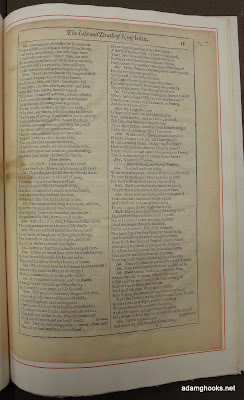 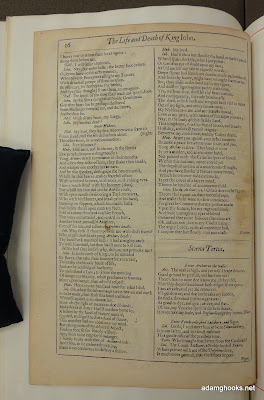 The leaf from the Third Folio (1663) happens to be the last leaf of Romeo and Juliet: 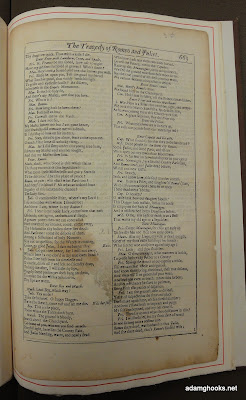 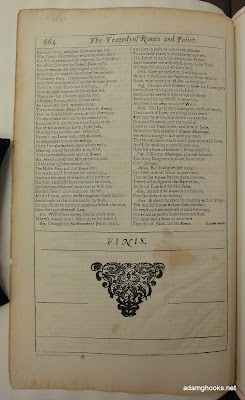 And finally, the leaf from the Fourth Folio of 1685 comes from Julius Caesar: 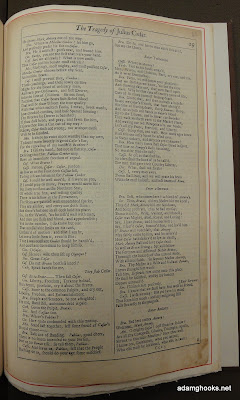 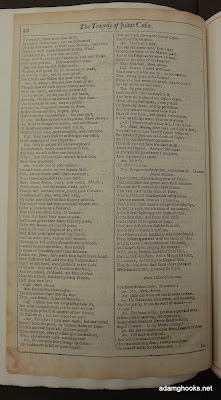 Why did the Grabhorn Press decide to publish such a book? That's a question I don't yet have an answer to, and which should be the topic of a separate post; what I do know is that the Grabhorn Press was an influential fine press in San Francisco through the first half of the twentieth century. (After the Grabhorn brothers, Edwin and Robert, died, the business was renamed the Arion Press; you can read a short history of the press here -- the device in the colophon may allude to the myth of Arion, who was saved by a dolphin). The press produced a number of sumptuous (and expensive) limited editions throughout the 1920s, culminating in their masterpiece, an edition of Whitman's Leaves of Grass (here is a brief account of the press). The Grabhorns also produced a series of illustrated editions of Shakespeare's plays, and did occasionally produce similar kinds of books, featuring, for example, leaves from famous bibles. As the colophon states, the Grabhorns printed only 73 copies of this book; the Iowa copy is, alas, not one of the eight printed on vellum. There is also, alas, more work to do in order to explain how and why The Grabhorn Press got into the business of Breaking Shakespeare Apart. 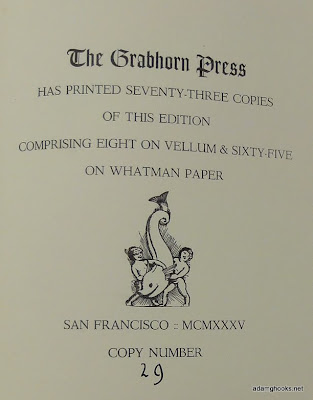