In my last post (Breaking Shakespeare Apart) I showed how one of the most important and monumental literary books in the world--the Shakespeare first folio--is anything but monumental, and is, indeed, perhaps not even a book. Rather than a definitive and complete whole, it is better thought of as a collection of removable parts--both within the printing house, where the contingencies of business impacted its contents, and in its subsequent life, where copies have suffered the vagaries of time (and of owners keen to sell off their copy bit by bit). In this post I want to look at the book that is often seen as the crucial model for the Shakespeare folio--Ben Jonson's Workes (first published in 1616), a book that is quite literally Jonson's own monument to himself. However, even though Jonson presents his book as a definitive, whole object--the embodiment of (his idea of) his complete works--it, too, is easily broken apart. 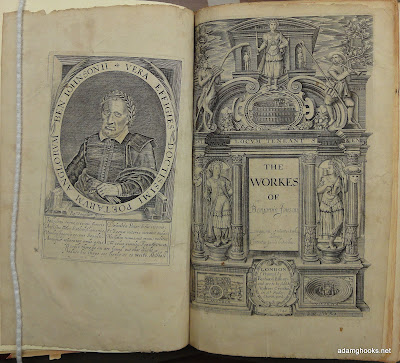 This is the Iowa copy of the second edition of Jonson's Workes, printed in 1640 (catalog record here). Well, "second edition" isn't exactly the right term, as I'll explain. Here you can see the famous title-page, with its determined allusions to classical genres, Jonson's attempt to associate his works, and thus himself, with the authority of the classics. If you click on the image, you can just make out the imprint in the cartouche at the bottom -- this is indeed an edition of Jonson's Workes printed in 1640, a reprint of the volume first published in 1616. Jonson was very much involved in compiling and designing his book: he omitted several plays (mostly early efforts he wanted to exclude from the official narrative of his career, or collaborative plays that would disrupt his image as a solitary, single author) and revised others. The book thus presents itself as the complete and authorized works of Ben Jonson, who in turn is presented as a coherent and self-sufficient author.

On the facing page is a portrait of that author, a portrait that often appears in copies of the 1616 folio. However, it was not originally a part of the folio--it is an engraving first produced c.1620 by Robert Vaughan that, apparently, many owners acquired (at some point) and had bound with their folio. It was until remarkably recently that this portrait was considered an integral part of Jonson's 1616 Workes -- it fooled bibliographers, and was exploited as a selling point by book dealers. And indeed, it is an integral part of what we now consider the 1616 folio to be, even if wasn't initially intended to be; and, of course, it is also fully integrated into the 1640 Workes, as you can see here. I'm not aware of the early history of this engraving (if indeed there is an early history) but I'd be willing to say that either binding the portrait with copies of the 1616 folio was common enough that the printers went ahead and reproduced it for the 1640 edition, or that post-1640 owners of the first folio actively sought out the portrait to add to their copy, so that it would match the second folio (for all they knew, supplying a missing part, and thus fully completing their own).

This is not the only copy of the 1640 Workes at Iowa, though. Here is another copy (or copies; or part of a copy):

Here you can see a stack of separately bound plays taken from the 1640 folio (five plays and the Epigrammes, although that volume also includes the entertainments and masques that follow in the folio). Here is the catalogue from the complete copy of 1640, so you can see which plays aren't in this stack: 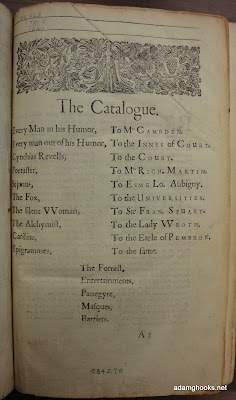 I have no idea where these volumes came from or why Iowa owns them, although it is clear that at least the rebinding (if not the dis-binding) was relatively recent, by the looks of those awful red bindings. So, far more immediately and visibly than that single extract of King John from the second Shakespeare folio, this stack shows how the 1640 Jonson folio could be separated into (some of) its constituent pieces. (And that's assuming all of these extracts are from the same copy). Jonson would surely be surly about this--he's been broken apart, his monumental book nothing more than a collection of removable parts.

One of the reasons this copy may have been broken apart is that Jonson's folio actively presents itself as a collection of separately printed parts. In the Shakespeare folio, each play begins on a new page, but the text of that play begins immediately under the title. Jonson's folio, on the other hand, includes separate title-pages for each play in the volume, title-pages that look just like any standard title-page you would expect to see. Here's a couple of examples from the 1640 folio, where a new play begins opposite the page where the previous play ends: 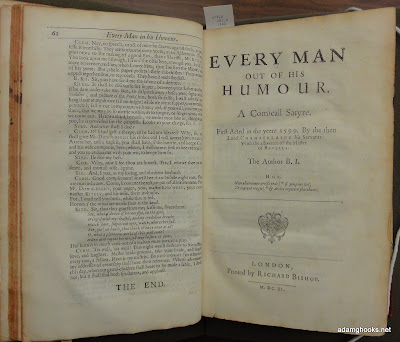 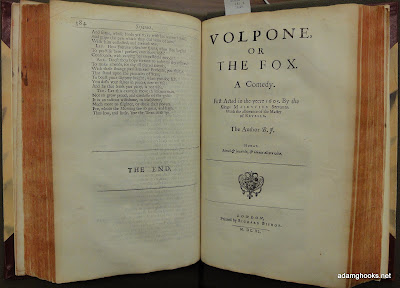 Even though the Workes is designed as an integral whole, it is presented as a collection that has been simply bound together--just like the countless collections of, say, sermons which look very similar, or of course the collections of play quartos bound together by their owners. When a play ends on the recto, rather than the verso, the effect is heightened. Here is the title-page of Poetaster, first in the 1640 folio, and then in the individually bound copy: 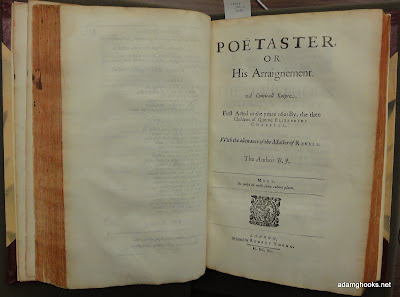 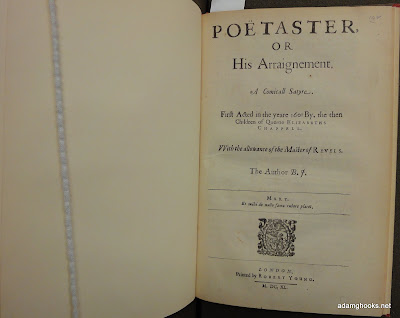 Except for the printed text that shows through the verso in the first image, these two title-pages look remarkably similar. It's just that in the second image, someone has literalized this presentation by actually removing the play and binding it on its own.

This is just part of the story of the second edition of Jonson's Workes, though. It's a much more complicated story than I need to re-tell here, so I'll simply summarize briefly: Jonson apparently planned a sequel to his 1616 Workes, since three plays were printed in folio in 1631 (Bartholomew Fair--which was written before 1616, but excluded from that folio--along with The Devil is an Ass and The Staple of News). However, this folio project never came to fruition, and Jonson died without seeing the sequel edition completed -- not to mention without seeing a second edition (i.e. a reprint) of his 1616 Workes. The Shakespeare folio, on the other hand, was reprinted nine years after it was first published.

When the first volume of the Workes was reprinted in 1640, the three plays previously printed in 1631 were integrated into a second volume (which was given a new volume title-page with a 1640 imprint), while a third volume (actually printed in 1640/1) included previously unpublished and unprinted works. To make matters even more complicated, sometimes the "second" and "third" volumes were combined (in various ways) into a single "second" volume, to accompany the "first" volume (which was a reprint of the 1616 Workes). And this "second" volume also exists as separately bound volumes (!) -- I just happened to come across this post from the St. Andrews library blog Echoes from the Vault, which shows the various pieces of this second volume in a stack that looks very similar to the one pictured above here.

My basic point here is that a "second edition" of Jonson's Workes doesn't really exist; it is instead a variously composed collection, just as the single volume of 1616 (and its reprint in 1640) looks like (and indeed is) a collection that can be put together and taken apart in various combinations. Why is this important? Once again, this calls into question the integrity of the object we call a "book." But it also questions the integrity of the author embodied in and symbolized by that "book." The Jonson and Shakespeare folios are widely seen to be landmarks in literary history which created and consolidated a conception of the solitary literary author that still reigns today. (That's a question I write a lot about in my formal academic work, which seeks to explain and, in some cases, argue against this narrative).

As you can see from the images above, the most powerful argument against this idea of the author--one that neglects the myriad collaborations involved in fashioning that idea--is the very material fact that these books are not the objects we thought they were. Breaking these books apart shows how they--and thus how Jonson and Shakespeare--were constructed in the first place.
Posted by Unknown
Newer Post Older Post Home