Remember when my students broke Shakespeare?  If you recall, during a class session in special collections, my students broke off the front board of the binding of our most important Shakespeare book, a copy of the Second Folio (1632), a moment which I reveled in, since it allowed me to teach a few valuable lessons about the Shakespeare folio--which is commonly called the most important book ever in the history of the English language ever and even the most important book ever in the whole entire history of the world ever. (Except maybe the bible; and I'm not exaggerating as much as you  might think). That moment of minor vandalism took the folio down a few notches, at least for my students, for a few reasons: 1) it's not even a copy of the First Folio, it's "just" a Second Folio; 2) part of the preliminary matter, including the title-page, are later facsimiles inserted to make up a complete copy; and 3) it showed, with great immediacy, that a folio--any Shakespeare folio, and by extension any important symbol of literary or cultural value--is a material object made up of many different physical elements, a fact which calls into question not only its status as a literary icon, but as an actual bounded and complete book. That is, it asks two central questions: what is (our idea of) Shakespeare? And what, exactly, is a book?


I was reminded of that gratifying episode recently as I wrote up a paper for a panel at the Society for Textual Scholarship conference called "Downsizing Shakespeare" -- a panel that aimed to put the Shakespeare folio back in its place (or, more generously, to determine exactly what that place is and how it has been defined over the years). As you might guess, I think the Shakespeare folio is ripe for a bit of iconoclasm (if not, exactly, vandalism). I've said it before, many times and in many different places, but the centrality of the Shakespeare folio to Shakespeare-oriented book studies tends to make me bristle with frustration. Or perhaps its just boredom, since I'm primarily a Shakespeare-oriented book historian, and especially for folks not in my particular sub-field, the folio is the most well-known object of study. Shakespeare circulated in a multitude of forms during and long after the seventeenth century, and the pervasive emphasis on the folio often causes us to ignore those other (and to me more interesting) forms.

It is (I will admit) a very important book, a landmark in the history of Shakespeare, and more broadly in the history of those concepts we now call Authorship and Literature. And it is the object which embodies and has been invested with the cultural value we now attribute to Shakespeare. This fact was relatively recently on display at the one institution most identified with the Shakespeare folio -- the Folger Shakespeare Library, which owns more folios than any other library, thanks to the dogged determination of Henry Folger. Part of that recent exhibit -- Fame, Fortune, and Theft -- can be viewed online. As the title makes clear, the exhibition was as much about the fetishism of the folio over the centuries than about the book itself, an idea made more entertainingly clear by the name of the exhibit catalogue: FOLIOMANIA! It is now the symbol of Shakespeare' fame, it's worth a fortune, and those two elements combine to make it attractive to theives (one of whom unwisely brought his stolen copy to the Folger for examination, which is one of the motivating factors behind the exhibit).

Look, the Shakespeare folio is too big to fail. But it is not too big to rip apart. And that leads me to the real subject of this post: 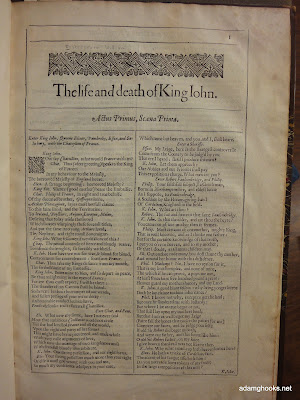 This is the first page of King John, which happens to be the first play in the section of "Histories" in the folio. This particular page comes from the Second Folio, and it happens to be in the Iowa Special Collections library (catalog record here). But it is not a part of our copy of the Second Folio -- not because of any overzealous student, though. This slim little volume consists only of the pages of King John from some copy of the Second Folio, pages that at some point were removed and sold on their own. It's not all of Shakespeare; it's just a piece of Shakespeare -- a relic, and a relic that would happen to be far more affordable than, say, an entire folio. So here are our two copies of King John, side by side: 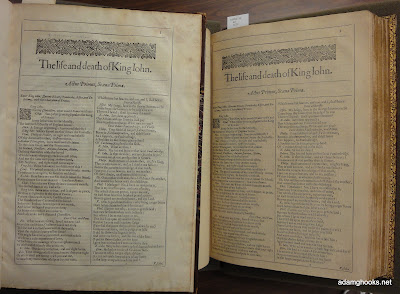 This is not an uncommon practice -- it has long been common to make up incomplete copies of a First Folio with pieces from a subsequent folio, and a quick search of the internet shows that there are many, many such partial copies of the folio (often consisting of just an individual play) on the  market. (These kinds of links tend to move or disappear, so I won't link to any here -- but a quick search should turn up several examples).

The King John that Iowa owns is in slightly rougher shape than its counterpart in the larger volume, as one would expect for a relatively unprotected pamphlet, although there are unfortunately very few signs of ownership or use, save one: 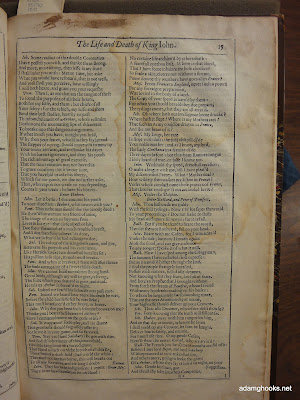 You can see just a bit of smudged-out handwriting practice in the upper-left corner: 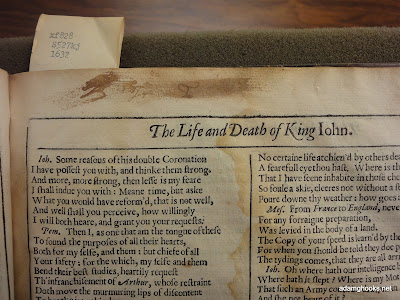 The practice of removing pages of rare books or manuscripts to sell piecemeal is well-known -- and oft-lamented -- and it is certainly not limited to Shakespeare. (Iowa also has a single leaf of the Gutenberg bible, bound sumptuously by itself, and leaves or pages of illuminated manuscripts are just everywhere online). What this shows, though, is that the Shakespeare folio -- what we think of as a monumental book, literally a monument to Shakespeare -- is made up of removable parts. Each of the three generic sections, the comedies, histories, and tragedies, have separate page signatures, meaning that they were printed as separate units, and so are, in some sense, physically unrelated until they are bound together. Some scholars have even hypothesized that the respective sections could have been sold separately (think the tragedies are too depressing? skip them and just take home the comedies!) although there's little to no evidence of that ever happening.

What this means is that a Shakespeare folio is only a book when it is bound together in a way that resembles what we know as a book. Pieces of it exist in states ranging from nearly pristine and complete copies, down to individual pages and fragments. There are abundant examples of this, the most famous perhaps being Charlton Hinman's magisterial (and perhaps a bit maniacal) collation of many of the copies of the folio owned by the Folger (accomplished with that most lovely of blinking, blinding machines, the Hinman collator). One of the results of that project was a facsimile of the folio, made up of pages only in the most corrected state -- it is thus an ideal folio in the sense that the page images were taken from several different copies. More recently, the Folger "added" three more folios to their collection, not by buying more copies, but by re-classifying some of the fragments as "complete" (or maybe "complete-ish") and thereby worthy of proper numbers (you can read more about this at the Folger's aptly named blog, "The Collation," here).

Nothing could demonstrate the instability of the material object more than this. Except, perhaps, for the newest magisterial study of the folio, The Shakespeare First Folios: A Descriptive Catalogue. This behemoth runs to 960 pages (!) and purports to give detailed bibliographical descriptions of every single copy of the First Folio extant on this planet (that the researchers could find). It is quite obviously a very valuable reference source, one that could only be undertaken given the massive investments -- both cultural and financial -- in Shakespeare and his iconic book. Among the tidbits to be gleaned here are the significant number of folios which are incomplete in various ways -- either literally as fragments, or as made-up copies featuring pages from a number of volumes (which were in any case simply assemblages of pages in the printing house that happened to be bound together into a single volume). The self-conscious monumentality of this study has not gone unremarked -- the TLS reviewer (review behind a paywall, unfortunately) wrote that


in piling up Folio on Folio, red morocco on russia calfskin, the object of their meticulous inquiry somehow emerges as rather less distinctive and less precious. In local contexts from North Yorkshire to New South Wales, the cachet of a First Folio is its singularity: that fiction of exceptionality is here decisively scotched.

The reviewer also goes on to make a comparison between the mania that has driven thieves over the years and the motivation of meticulous scholarly researchers, both of whom share the same "obsession." In defense of the compilers, though (I am, after all, a similarly obsessed book nerd) I would point to the brief preface to the catalogue, written by Paul Werstine, who focuses not on the cachet of the Folio as an icon, or as a symbol, but instead on the value of the study for editing and reading Shakespeare, since the researchers have found many additional variants in the text introduced by press correction in the printing house. The TLS reviewer lamented the lack of attention to the actual text of Shakespeare, but the study itself is framed by an attention to Shakespeare's text, rather than to the uses that book (or the pages of the book) have been put to.

I'll end here with something else that studies of this nature make possible -- they help us understand Antiques Roadshow. No, really, this is relevant -- several people have sent me this link over the past few months, since it was filmed down the road in Des Moines, and hits many of the points I've mentioned already (the most iconic book in the English language! Second only to the bible!):

This "partial" First Folio consists of only 176 pages, according to the video, and as the appraiser says, it's clearly just a fragment, without even a title-page, and you might say "gee, this isn't gonna be anything." But, it's Shakespeare! There appear to be only two complete plays represented here, and they certainly aren't the favorites in the canon (1 Henry 6 and 3 Henry 6 -- too bad, everyone knows 2 Henry 6 is the best one of the trilogy). The appraiser actually advises the owner to take out the two complete plays and sell them separately (!) but, to his credit, also suggests that only a page-by-page examination can reveal where the pages actually came from -- that is, whether this is a mixture of different volumes, or even different editions.

He doesn't mention what's on the spine of the binding, though, and if you look quickly, you can see that this is part of the "Brickhill Shakespeare." This fragment doesn't seem to have made its way into the new catalogue, but it is represented as a fragment in the precursor, the census undertaken by Anthony James West (where it's given the number 227). Most of the "Brickhill" Shakespeare (named after Brickhill Manor, Bletchley, the home of a previous owner) was destroyed in a fire at the Riviere bindery. It's unclear what relation the fragments in this video have to the fragments previously recorded.

So let this be a lesson to you all -- this is why you shouldn't have your Shakespeare re-bound. The binder might burn your book. (But at least it wouldn't have to live forever in red morocco).
Posted by Unknown
Newer Post Older Post Home