The endpapers of a manuscript in the Beinecke Rare Book & Manuscript Library at Yale University may -- or may not -- contain an early quotation of Shakespeare. I first encountered this manuscript in the Remembering Shakespeare exhibition that formed part of a series of events called Shakespeare at Yale. The exhibit was curated by David Scott Kastan and Kathryn James, and they produced a lovely exhibition catalog. The image below is taken from the Beinecke copy of Peter Idle's Instructions to his son, which once belonged to Thomas Dowse, who transcribed two lines that can be found in Shakespeare's poem Lucrece, first published in 1594. But it is unlikely that Dowse was thinking of Shakespeare when he copied these lines into his book. 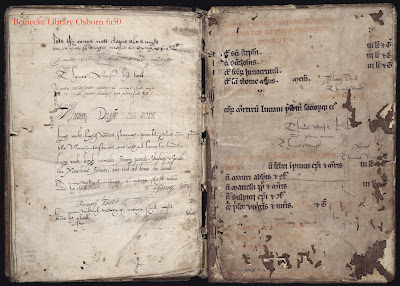 You can find larger (and zoomable) images of the manuscript in question in the online exhibit here, the catalog record here, and in the digital image viewer here.

Dowse repeatedly inscribed his name in a formula often used by early modern readers: "Thomas Dowse his book" or "Thomas Dowse his name." Dowse's interest in the couplet that is also found in Lucrece seems to have been equal parts handwriting practice (hence the repetition) and commonplacing -- that is, extracting useful and appropriate lines which have some relevance to one's own interests.

He copied out these lines twice, with only minimal changes:

The lines describe the difficulties that must be confronted and surmounted in order to achieve success: the merchant fears storms, pirates, and other impediments that imperil his cargo, before landing safely at home where he earns and enjoys his riches. The rhyming couplet is just the kind of instructional maxim that would appeal to an active (and perhaps ambitious) reader. As the exhibit catalog states, "the lines, describing the risks that must be faced before eventual success, might well have appealed to an ambitious young man eager to make his way in late Elizabethan England, and so they took their place among the improving maxims and inspiring epigrams that Dowse copied into his book" (p. 11).

The early editions of Lucrece include commonplace markers -- inverted commas that draw attention to lines that are particularly quotable -- and so the text as a whole is marked as a suitable source for commonplacing. Shakespeare's two narrative poems were especially attractive to readers -- excerpts from the two poems far outnumber those from Shakespeare's plays in the early modern period, particularly in a series of printed commonplace books that appeared around the year 1600. Removed from their immediate poetic or dramatic context, the passages were transformed into memorable maxims that could be used and applied by readers in a variety of circumstances.

In context in Lucrece, however, the maxim means something far more sinister. The couplet concludes a stanza in which Tarquin quotes two different aphorisms that serve to strengthen his resolve to overcome the obstructions he encounters before he enters Lucrece's chamber -- where he will commit the crime that the running title on the page reiterates: "THE RAPE OF LUCRECE." You can read the passage here thanks to the Folger Shakespeare Library. 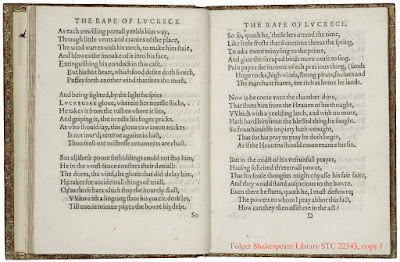 Shakespeare deliberately inserted this sententious aphorism into his poem, demonstrating the practice of commonplacing -- the application of a general statement to a particular situation -- while at the same time exposing the potential misuse and abuse of the practice by giving the lines to Tarquin.

Dowse did not need to consult a copy of Shakespeare's poem in order find these lines, however. The couplet is quoted in Bel-vedere (1600), a printed commonplace book which collected extracts from the works of contemporary writers (although they are all unattributed) and organized them under topical headings. It is included in the section "Of Feare" where it conveniently appears at the bottom of the page facing the subject heading: 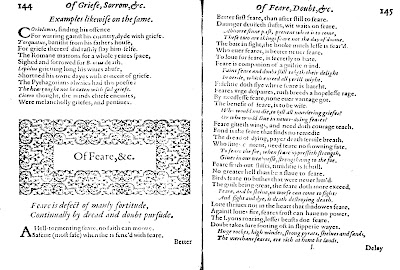 Was Thomas Dowse an early reader of Shakespeare? Or was he simply an active reader who found the maxim in a printed commonplace book? It is impossible to know, but one thing is certain: the unattributed lines copied by Dowse have nothing to do with Shakespeare's authorship or reputation. He was interested in the sententious quality of the couplet, rather than its source in Shakespeare's poem.

Another example can help illuminate Dowse's habits of transcription. Shakespeare was not the only contemporary English writer whose work struck Dowse as interesting, since on another flyleaf he copied out an extract from William Warner's famously sententious poem Albions England: 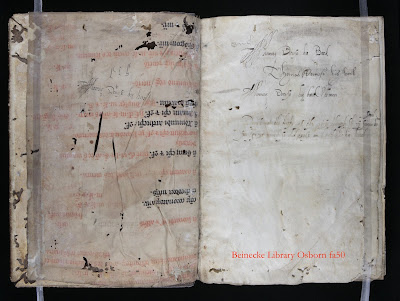 You can see a much larger, zoomable image here. The lines appear under yet another repetition of Dowse's name, and read as follows:

As you can see here, the lines appear at the bottom of this page, taken from the 1586 edition of Warner's book: 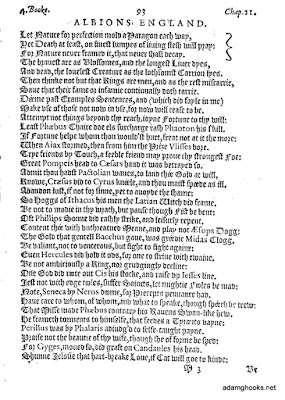 A bit of quick searching shows that these two lines also appear in a printed commonplace book, this time Englands Parnassus, published, like Bel-vedere, in 1600: 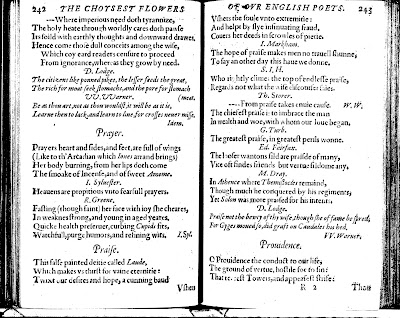 Unlike the Shakespearean lines above, these are attributed to "VV. Warner." So there is a better chance that Dowse had Warner in mind -- and indeed, with this (admittedly small) sample we can see that, considering the minor textual variations in Englands Parnassus (notably, "fame" for "forme"), it's more likely that Dowse copied the lines directly from Warner. But at the very least, the mobility of these extracts removes them from any straightforward regime of authorship, placing them instead in the more abstract context of sententious extracts with little or no connection to an attributed author.

It is in fact this mobility that makes the Dowse manuscript so valuable and interesting, beyond any putative connection to canonical authors. Even if Dowse wasn't thinking of Shakespeare, his act of copying does demonstrate the ways in which Shakespeare's texts circulated -- and re-circulated -- through the practice of commonplacing. Shakespeare, that is, could be valued because his texts (or at least some of his texts) had a kind of aesthetic quality that made them attractive to appropriative readers. We might say, then, that we remember Shakespeare in part because early readers like Thomas Dowse re-membered Shakespeare's texts -- whether or not he remembered Shakespeare himself.
Posted by Unknown
Newer Post Older Post Home