This past weekend, I attended the Past, Present and Future of the Book conference held at nearby Cornell College. It was one of the more intriguing book history conferences I've been to (and not only because one of the keynotes featured an out-of-tune ukelele with a hidden book inside). The conference brought together both academics -- like Iowa's very own Matt Brown (the director of the UI Center for the Book) -- and book artists (such as Peter Thomas who played the aforementioned ukelele). It was a chance both to discover and celebrate the book-work being done locally, and to think more broadly about the role of craft in the digital age.

I was there to deliver a report on the survey of STC books we've done here in the Iowa Special Collections over the last year or so -- a report that was part of a joint presentation with Rachel Stevenson, the undergraduate researcher who actually did the work of surveying the collection. Most of what I had to say has appeared here before, in a post I called "less known libraries" which considered the differences between our own survey of STC books -- which focused on used books -- and a previous survey conducted in the 1960s, which focused only on books of established literary merit. Rachel's part of the presentation was a distillation of the honors thesis she's been working on, which takes as its subject a copy of Spenser's 1679 Works annotated by an eighteenth-century woman reader (!). What follows here is a version of her conference paper, which, for a number of reasons, I'm calling "Her Book." 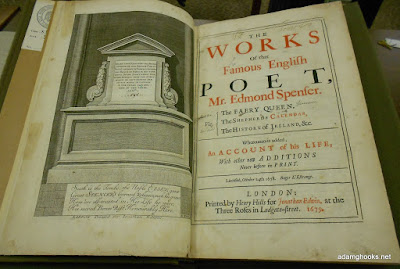 A year ago, I began a research project surveying the Short Title Catalogue collection in the University of Iowa Special Collections, focusing on books in English between 1540 and 1640. As I worked my way through the collection, I realized there is something special or weird or wonderful about every book.  But that is the beauty of book studies:  scholarship doesn’t have to end at the printed word.  What I care about is why a reader would buy this book, use it, abuse it, bind it, and read it.  All works great and small are given meaning by the readers who leave their mark, whether just with fingerprints or in ink.  As the research project continued, Professor Hooks and I began to work with the “works of literary merit” and the not so meritorious works in our less known library.  Early in the project, we examined Letitia Thomson’s Faerie Queene.  I call it her book because she did.

This sparked my interest, because, even though I had seen about a dozen other books with women’s provenance, there were none with such an active female reader.  The focus of my current honors thesis project surrounds Letitia Thomson’s use of Johnathan Edwin’s 1679 Spenser’s Works alongside an examination of the reading practices Spenser endows his female characters, namely Una and Britomart.

This connection was fortuitous because of the interest Letitia Thomson expressed in these two characters in her annotations. 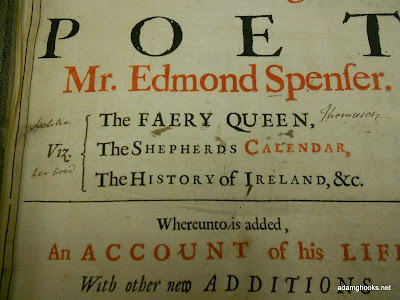 On the title page of the 1679 edition of Edmund Spenser’s Works, a woman wrote “Letitia Thomson, her book.” Other men owned this book and marked it with their names—John T. Betts, Edward James, and Will Thomson—but none of these men left a record of reading the Works with the same care and intent as Letitia Thomson.  She did not just read her book, she annotated it, interpreted it, and marked passages in it to remember and read again.  The magnitude of cross-referencing, notation, and use of other literary works shows Letitia to be a conscientious reader. This book is useful to discuss because women’s reading practices are often overlooked and there is little evidence of women’s reading in early modern books.  Even though Letitia is long gone, her writing informs mine, we communicate through her notes in her book, our hands turn the same pages, and we seek, as women, to understand The Faerie Queene.

My study of Letitia Thomson’s response to The Faerie Queene represents the way the two of us read differently according to our situation in time.

Much of my interpretation of the text is based on a close-reading of specific words, such as boldness and chastity, in order to examine the ways the language shapes female reading practices inside the poem and outside of it. The mid-18th century, when Letitia Thomson reads and writes in her book, was the height of critical engagement with Spenser’s work.  She draws much of her understanding of the work based on the plot and Spenser’s intentions, according to the literary criticism techniques of her time.  Changing ideas about reading practices require our attention, but it is also expedient to discuss the ways the text as an object hinders or encourages female reading, by examining the way Letitia Thomson used her book. 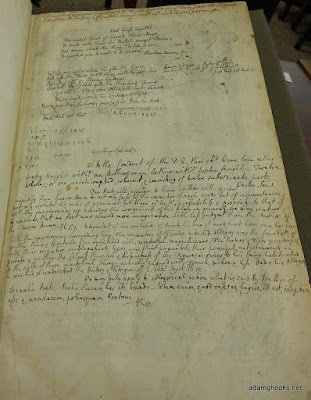 Thomson not only reads The Faerie Queene but actively engages with the words.  She writes notes on the front flyleaf of the Works, filling almost the entire page with her handwriting. She writes throughout all the works of Edmund Spenser, but most heavily in The Faerie Queene.

Within the text, Letitia Thomson relies on Thomas Warton’s 1754 Observations on the Fairy Queen of Spenser as a reader’s guide leading her through the dense language, religious allegory, and confusing chronology of The Faerie Queene. 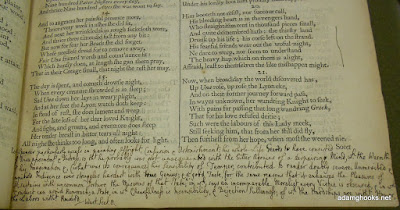 As a dutiful reader, she devises her own text marking system where each note has an ‘x’ by the part of the text she references (stanza, line) and then she writes another ‘x’ followed by the note in the bottom margin.

Letitia meticulously cites whatever source she uses and its section number, which is most usually Thomas Warton, who then directs her to other contemporary and classical sources such as Milton, Dryden, and Horace.  In three instances, she makes notes in Greek and Latin, which come from Warton. 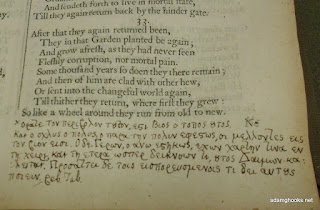 This may seem insignificant, but her ability to copy out and recognize where to put the citation as well as choosing which instances she wishes to write down in her book, shows her to be a reader of unusual learning and discernment.  Thomson is especially remarkable in her attention to detail and cross-referencing, interacting with Warton’s footnotes, his text, and the text of The Faerie Queene.

An excellent example of Thomson’s personal reading occurs on the front flyleaf of the Works, where she writes some overall analysis taken from Warton about the twelve book structure of The Faerie Queene, Spenser’s intentions for the work and some general notes concerning the chivalric romance style.

But she also writes sixteen references to specific stanzas not set down by Warton for her particular study.

While Warton focuses on the traditional reading of Spenser’s literature: his motivations, history behind the story, style and form, Letitia highlights a more personal reading of the text.  She does not write personal notes she wants to remember within the printed text of the story, but keeps her opinions on the prefatory pages. 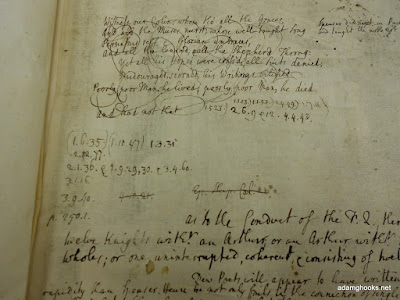 On these pages, she chooses to remember parts of the text which underscore the frailness of men and the mistreatment of women. The best example of this occurs with these two stanzas (1.1.53 and 1.4.49). Here, Thomson compares the two disparate ways the Redcrosse knight treats his female companions. Like the shining moments of female strength in The Faerie Queene, Letitia steps outside the bounds of the text and notes stanzas she feels are relevant to her personal reading.  Letitia Thomson surpassed the low expectations for her sex and seems to be one of the most learned people I have come across in my research.
Posted by Unknown
Newer Post Older Post Home