"a collection of plays, published separately"

Those last two posts, on Shakespeare and on Jonson, considered their respective folios not as monumental books, but instead as collections of removable parts -- collections, that is, of sections (and even individual works) that could be, and indeed were, removed from the book, and which subsequently lived textual lives of their own. This called into question the very definition of a "book," as a coherent material object, not to mention, due to the canonical status of both authors, the very definition of a coherent form of authorship.

This post builds on the previous discussions by showing an actual exemplar of the kind of play collection that, particularly, the Jonson folio resembles. Printed plays would normally have been sold without a binding -- as slim quartos, they simply weren't substantial enough to bind on their own -- and, since they were normally printed in the same format, and thus were about the same size, many owners and erstwhile play collectors would bind several plays together into one volume. It was a natural and convenient way to preserve and organize a collection, and other similar kinds of pamphlets (particularly sermons and newsbooks) were often treated the same way. These collections are variously called nonce collections, or coupled books, or sammelband. The best known such volumes today are the few surviving volumes of the Pavier quartos, the collection of ten Shakespearean plays published c.1619 by Thomas Pavier, and which were meant to be (and in some cases were) bound together. (Here is an example, from the library at TCU).

Iowa doesn't have any 17th century play collections, but we do (remarkably) have a few from the 18th century, the oldest, best and most interesting of which is shown here:

This collection is cataloged as "Comedies; a collection of plays, published separately" (catalog record here). This is the oldest collection of plays the Iowa library owns -- meaning that the included plays are older (published between 1697 and 1709) and that the binding itself is far older than the other collections (all of which are, unfortunately, rebound in those awful library bindings). The relatively narrow range of publication of the plays may indicate that this collection was put together not long after the plays were published (although I'll leave that question to the binding experts, I suppose). 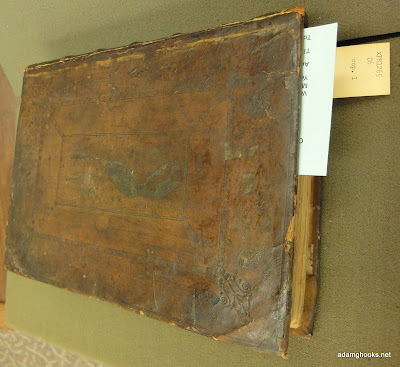 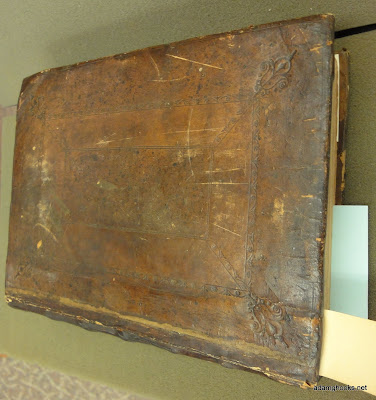 There's a lot going on in this volume, beyond the mere fact that someone decided to bind these early-eighteenth-century plays together. There are four marks of provenance to be found here, most of which appear on the first opening: 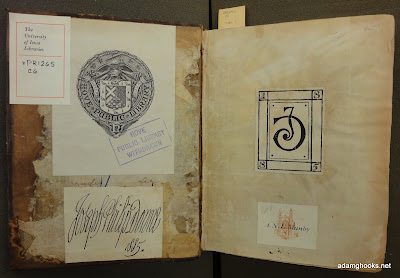 Here you can see the Iowa library call number, which has been pasted over another (and far more attractive) library bookplate, that of the Hove Public Library, which is stamped "withdrawn." (Hove is right next to a more well-known British coastal town, Brighton, which is due south of London). On the lower right is the bookplate of A. N. L. Munby, the famous twentieth-century Cambridge bibliographer (about which more, below). And on the lower left, there is the signature of the intriguingly-named Joseph Philip Donne, along with the date (1885). I'm guessing the bookplate on the upper right may be Donne's, since it looks like a stylized monogram of his initials, JPD. Pasted on the back board of the binding is one final mark: 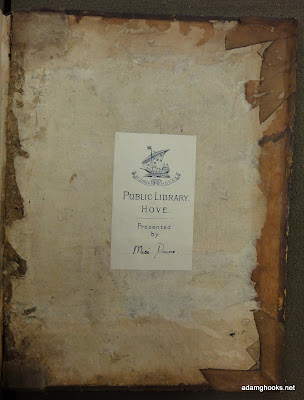 This is a stamp from the Hove Public Library, stating that the book was presented to the library by "Miss Donne." Joseph Philip Donne (or, as this may indicate, one of his heirs, presumably here a daughter?) did donate books to the Hove library, including some fine press books (I found that out here) although not enough to warrant a named collection in Hove's rare book room. As the stamp on the front indicates, this book was at some point deaccessioned, at which time it presumably made its way into Mr. Munby's collection (and I'll explain one possible reason for that below). How a book from a Cambridge bibliographer made its way to Iowa is (as usual) beyond me. It's reasonable to conclude that J. P. Donne acquired this volume in 1885, hence the dated signature in the front; there was a Joseph Philip Donne that died in 1906, and the Hove library was created in 1908, so the timeline makes sense.

Donne listed all the plays on a sheet at the end of the volume, once again including his signature:

As you can see, some of these plays are by quite well-known authors, including Etherege, Congreve, Cibber, and Wycherly. A similar list has been written in pencil opposite the title-page of the first play in the collection, Etherege's fantastically-titled The Comical Revenge; or Love in a Tub. 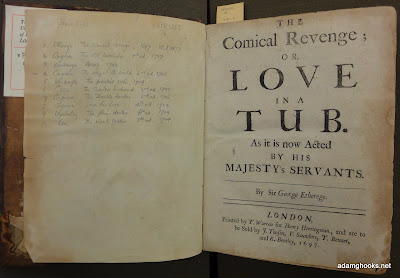 The plays themselves are not what I'm interested in, though -- and I'm guessing it's not what A. N. L. Munby was interested in, either. Several of the plays here include advertisements in the form of brief booksellers' catalogues (sometimes called publishers' lists). I have (ahem) worked rather extensively with these kinds of catalogues (if you're interested in my published work on this, go here). These lists are valuable because they often include books that a particular stationer did not actually publish -- and this kind of information (the books sold retail, not wholesale) is very difficult to find, since we are almost entirely limited to evidence from imprints, which only identify the books a stationer published. I also find them valuable because of the information we can glean from the organization of these lists -- for example, they often include separate categories specifically for "Plays" -- which shows that playbooks were particularly attractive, vendible books.

These catalogues may have caught Munby's eye, because much of his career was spent enumerating book sale and auction catalogues -- labors which in part resulted in British Book Sale Catalogues 1676-1800. These more ephemeral catalogues (or publishers' lists) were not his focus -- Munby was interested in more proper catalogues, like those made to advertise an auction of a collection -- but it may in part explain his interest in this volume. It certainly explains my own!

What follows here are images of every catalogue in this volume -- as you can see, they are relatively short, and often appear on spare pages at the end of the play (although by this date they are also advertised in the imprints, which does indicate they were an integral part of the pamphlet, which wasn't always the case).

The first is from Congreve's Old Batchelor, published by Egbert Sanger, who was selling an extensive inventory of plays, as you can plainly see. "PLAYS" are advertised by author, before "BOOKS," followed by more "PLAYS," which means that plays are in some sense not "books"): 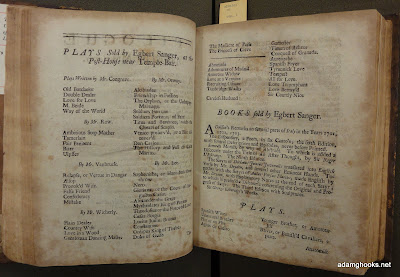 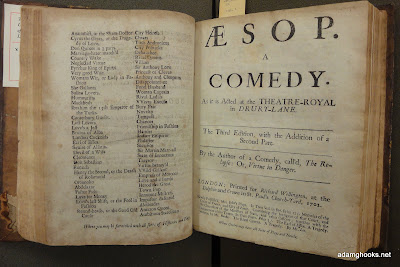 Remember those blank "A1" pages that precede the title-page? This one is put to good use: a single-page catalogue has been printed on the verso: 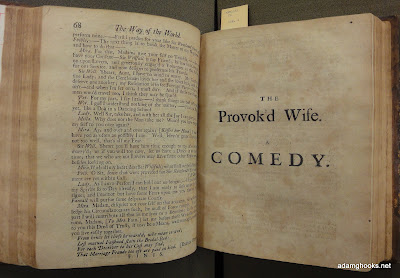 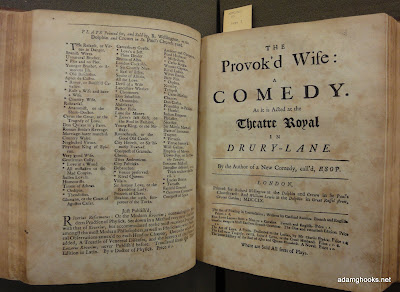 This one includes mostly plays, along with a few "Just Published" titles at the bottom. This makes a lot of sense -- customers who are buying a play are, after all, the target demographic to which you would advertise your plays, as the imprint makes clear: "Where are Sold All Sorts of Plays": 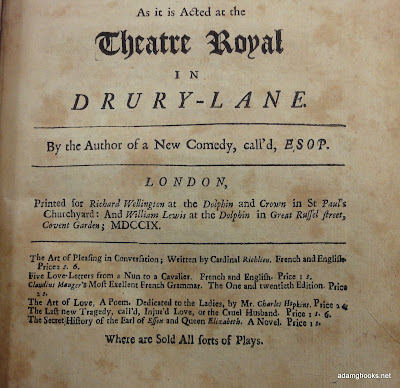 At the end of a 1706 edition of Congreve's Double-Dealer, there is a single-sheet catalogue from the famous Tonson publishing house -- and it just so happens that the play bound in after this one was also published by Tonson: 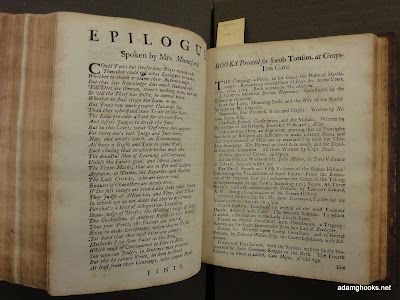 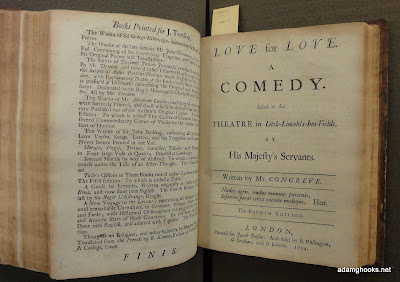 Tonson does not separate out or otherwise emphasize his stock of plays -- in fact, as the bottom image shows, he advertises the "Works" of several (very well-known) authors, works which are in large part dramatic. And this is the real conceptual issue at stake here: Jonson's Workes were the first significant collection of literary works in English (titled as such) to include some plays; his folio is thus considered a landmark because it allegedly raised the status of mere "plays" to the status of properly literary "works." This is obviously a vast simplification of the issue -- or, at least, my argument is that this is a vast simplification of the issue. Playbooks continued to be called "plays" -- particularly when they were individually printed and published. As this post has shown, those plays could be bound together to form a more substantial volume, but they were still called -- and indeed advertised and categorized -- as "plays," well into the eighteenth century.

Tonson, like Jonson, is known for raising the status of plays, not only by publishing the likes of Dryden and Cowley and Suckling, but, famously, for monopolizing the publication of Shakespeare's works (his shop was at the sign of the Shakespeare's Head). But as this volume shows, Tonson also published "plays" which could easily fit into a volume of other "plays." There aren't any "works" here, and in fact other publishers and booksellers actively advertised their stock of plays, which were clearly distinguished from "books."

So, plays are not books. They were not big enough to be books on their own, and they were sold as commodities distinct from books. And to my mind that's the most important thing we can learn from this collection of plays, published separately -- they are bound together materially, commercially, and conceptually.
Posted by Unknown
Newer Post Older Post Home