In my last post I looked at a collection of plays, published separately, that had been bound together by an early owner. This was a very common practice, particularly for slim pamphlets printed in smaller formats like playbooks, sermons, and newsbooks. In this post I want to look at some newsbooks that were, at one time, bound together, but which have since been broken apart -- along with some ghostly evidence that reveals what one of the pamphlets was bound with.


We have several pamphlets and newsbooks from the era of the English Civil War, which is unsurprising, considering the explosion of printed pamphlets in the late 1630s and, especially, in the 1640s, after the collapse of the licensing regime. This wonderfully-titled pamphlet, Lord Bishops none of the Lords Bishops, is not a civil war pamphlet, but rather a product of the so-called Bishops' War between England and Scotland, a conflict precipitated by Charles I's attempt to reform the Scottish church. This is one of the more substantial pamphlets in the collection, as you can see from this image:

It seems reasonable to suppose that many of the pamphlets in this collection were at one point bound together: most concern the conflict with Scotland (and several were printed in Edinburgh); and many are now housed in identical conservation envelopes and/or boxes, which probably indicates they were cataloged at about the same time (whether they were already broken apart, or not). Although the pamphlets are generally quite thin, you can just make out some remnants of a binding on the slim spines of several: 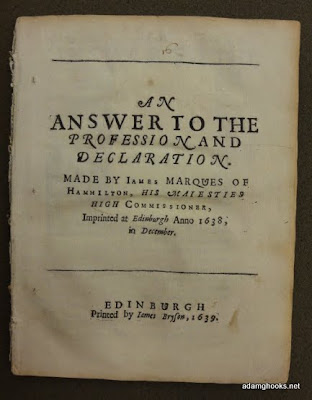 We even have two editions of one of the pamphlets, distinguished by the different printers' ornaments:

As you might have guessed, from the title of this post (if not from your extensive knowledge of 1630s English politics) the controversial Archbishop of Canterbury, William Laud, was involved in Charles's attempts to reform and unify the protestant churches of the realm. Although Laud had little connection to the Scottish crisis -- he denied any direct involvement -- it was this crisis that led to his downfall. Charles recalled Parliament in 1640, where Laud was put on trial, and subsequently imprisoned and eventually executed. One of these pamphlets reports on these events: 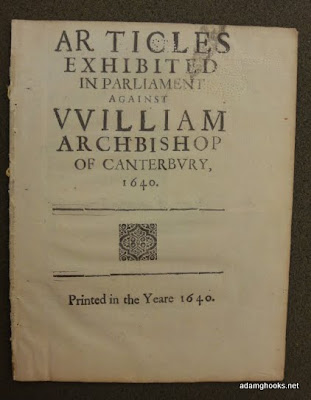 It's an entertaining read, so feel free to browse -- it's a very short, single-sheet pamphlet. (The Scottish troubles are mentioned in Article XIII): 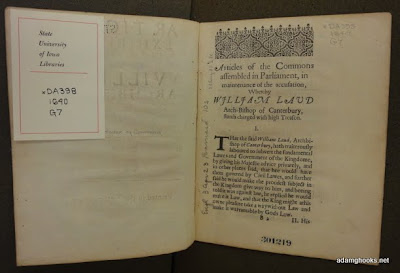 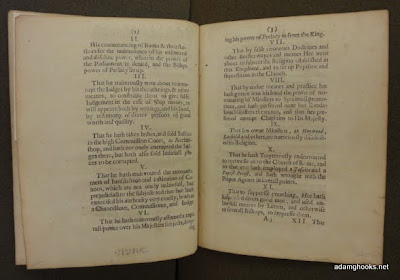 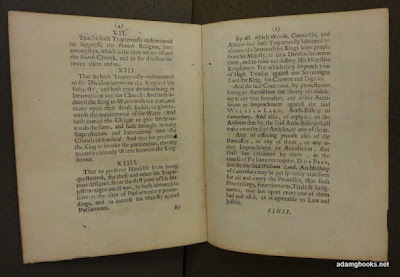 It's the final blank verso that I'm interested in, though -- and the fact that it is blank (or, nearly blank) holds the key to finding out which pamphlet it was once bound with. Remember the ghost image left on the verso of one of the blank A1 pages? One of those initial blanks was moved around and inserted in the wrong place; however, you can still discern traces of the title-page on its verso, a result of prolonged contact in which the ink transfers, ever so slightly, to the verso. And as luck would have it, that's also exactly what happened with the final verso in the Laud pamphlet. I've toyed around with a couple of the images so you can get a better look than you would with the naked eye: 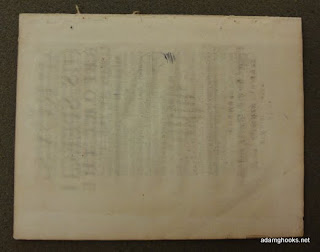 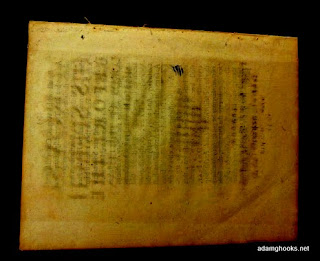 I could clearly make out the words in the second and third lines "HIS SPEECH / BEFORE THE" -- and I was pretty sure what the following line said, as well as the fact that the first line was probably a name. (If you're at all familiar with this genre, it's common for these small pamphlets to report speeches made in parliament, or at parliamentary trials). You can also see a heavy and distinct shape of printers' ornaments. It turns out that the two lines I deciphered were all that I needed, as a quick search of EEBO confirmed. The name I was looking for (and indeed at) was "Mr. Rouse": 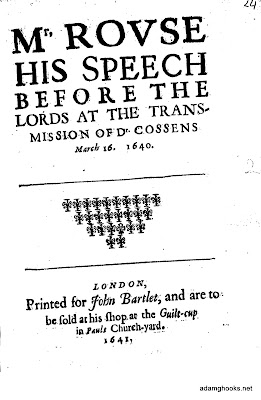 This was a report of a speech given by Rous (as his name is usually spelled) at the trial of John Cosin (who Rous accused of being a papist, naturally). Rous was an active member of parliament, not to mention the stepbrother of the famous John Pym, and he would be an avid supporter of Cromwell in the civil war. (He also appears to have been the one to author the injunction closing the theatres in 1641). This is another single-sheet pamphlet, which also relates events from the parliamentary crisis leading up to the civil war. While it doesn't directly relate to the trial of Laud, it does evince a clear anti-Laudian bias, and so it's not surprising this was bound with the previous pamphlet (and the volume probably included many more pamphlets on the same or similar topics, as well).

Suffice it to say, this Laudian ghost reports the speech of someone -- and was perhaps owned by someone -- who would have been pleased to see that Laud would shortly be nothing more than a ghost himself.
Posted by Unknown
Newer Post Older Post Home