In my last post I looked at a few short pamphlets from the era of the English civil war -- pamphlets that were so short, in fact, that they consisted only of a single sheet in quarto. These slim pamphlets were, at one point, bound together in a larger volume, both for convenience and for preservation -- thin quartos were notoriously ephemeral, which is why few copies of each edition often survive. In this post, though, I'm going to look at a couple of pamphlets that were never bound with anything -- and indeed, never quite made it through the entire process of becoming proper pamphlets. 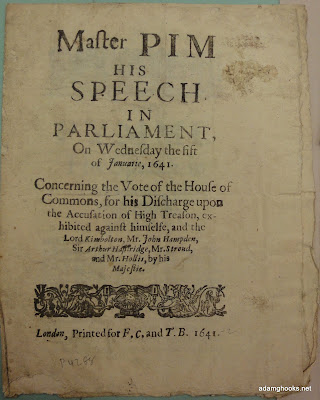 "Quarto" was one of the standard formats in early modern printing, and was commonly used for the kinds of pamphlets I've been discussing recently: playbooks, sermons, and newsbooks. The "quarto" format means that the text of multiple pages is printed on a single sheet and then folded twice, in order to make a total of four leaves, or eight pages. (Folio, in contrast, means that the large sheet is folded only once, which is why folios are usually of a larger size). The number of times a printed sheet is folded is not the only aspect of format (thus spake Tanselle) but it's enough for my purposes here.

If you're not familiar with the more technical aspects of bibliography in the hand-press period, then the process can be confusing -- unless, that is, you have a convenient way to visualize the pages as they were first printed on a single sheet. There are a number of ways to do this: the Folger Shakespeare Library has a fantastic online tool -- called Impos[i]tor -- that allows you to impose the pages of books in their online digital image collection (a brief introduction can be found here); and Sarah Werner over at Wynken de Worde shows you how to make your own DIY newsbook.

Or, if you're lucky -- and today's your lucky day! -- you can take a look at a couple of single-sheet quarto pamphlets that still exist as one single sheet. The title-page above is one of two pamphlets from c.1641 reporting speeches by John Pym before Parliament. As you can see from the following images, the pages of both pamphlets are unopened -- meaning that the folded pages were never cut, as you would have to do in order to read the pamphlet as an actual codex: 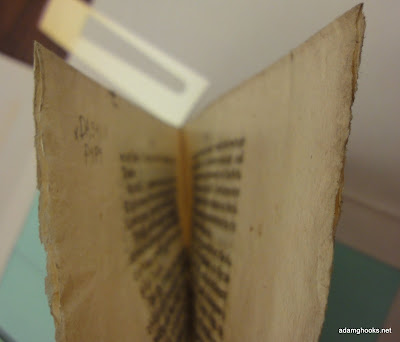 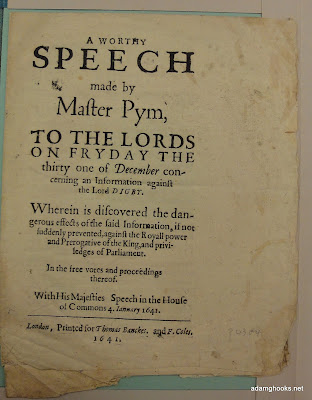 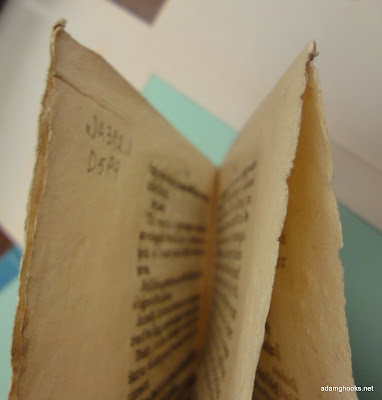 Both pamphlets were folded, as they should have been, but the final step of cutting the pages at the folds was never taken. This doesn't mean, however, that the pamphlets were never actually read -- after all, they are only a single sheet, and when unfolded the contents could be read (although it would require a bit of spinning and turning to accomplish this). The first pamphlet was actually folded a third time, as you can see from this image of the final verso, which shows the fold, along with a good bit of wear and tear: 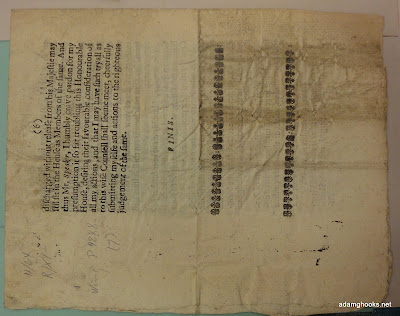 In this case, it might have been more convenient to leave the pages unopened, in order to reduce the size even further (perhaps as a way to more easily send it to someone interested in the contents).

The following two images are both sides of the second pamphlet, the "Worthy Speech made by Master Pym" -- you can see there are only six pages of text, a title-page, and the blank verso of the title-page: 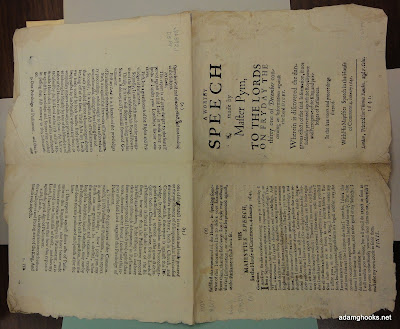 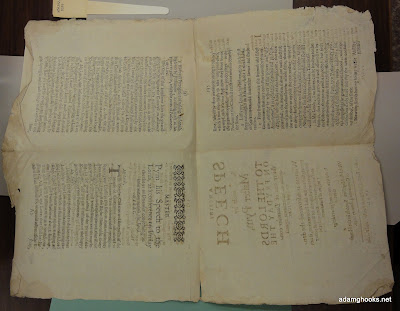 If you click to enlarge the images, you can see that the pages of text are numbered, 1-6, and there is only a single page signature, just visible in the lower left of the bottom image. Page numbering was notoriously inconsistent, but page signatures, which are crucial indicators of the format, are -- usually -- quite reliable. In fact, the page numbers in both of these pamphlets only count pages of text -- page "1" is actually the third page, since the title-page and its verso aren't counted.

In the following two images, I've superimposed both page signatures and the corresponding numbers, 1-8, so that you can see the order in which the pages would appear when the sheet is folded: 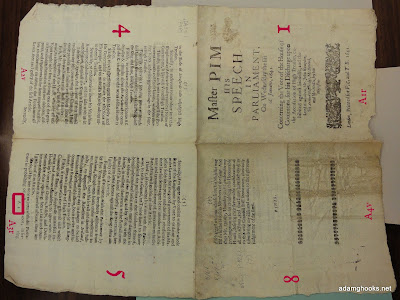 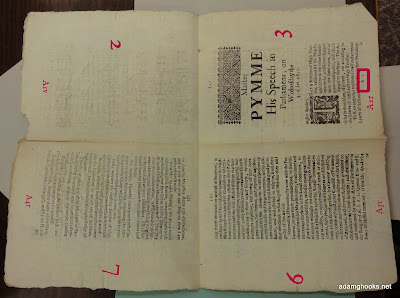 There are only two page signatures here (the rest have to be inferred) and I've put rectangles around them. In  the bottom image you can see "A2" on the first page of the text proper; and in the top image you can see what should be "A3" in the lower left corner. However, this signature is printed as "A2" -- which is a mistake. It seems that even early modern printers -- clearly working rather fast to produce a contemporary account of a current event -- could get confused and make mistakes.
Posted by Unknown
Newer Post Older Post Home