In the last two posts, I looked at several civil war era pamphlets: some which had once been bound together, but which now possess only ghostly traces of their onetime companions, and a couple of single-sheet pamphlets in quarto which remain unopened to this day. This post likewise looks at several separately published works -- this time in folio -- which remain bound together, far more sumptuously than the slim, cheap quartos in those previous posts. No, unfortunately the title of this post isn't an allusion to cake, but the binding is no less rich. 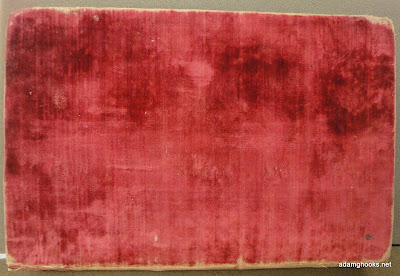 This is the red velvet binding to a group of Acts of Parliament published over the last decade and a half, or so, of the life (if not quite reign) of King Charles I. In the Iowa library, the entire volume is given a single call number (catalog record here) although the five titles are given distinct catalog entries and are, bibliographically speaking, completely separate. Here's a closer look at the binding, where you can see what appears to be the wound left by a library call number stamp at the bottom of the spine (!)

I'm no expert on 1640s politics, so I'm not going to regale you with an account of the political significance of these tracts -- if you have even the most basic knowledge of the English civil war (hint: Charles and Parliament didn't get along -- they really didn't get along) then you'll know that these reports, some of them of rather considerable length, were of the utmost significance at the time, and as a subsequent record of this turbulent time. I'll leave it to my friends and colleagues who are experts on this period to tell me more.

Here you can see the title-pages of each distinct set of acts, with the date of publication in the caption  -- notably, like several of the pamphlets I've looked at recently, they were all published in Edinburgh:


I haven't come across many velvet bindings -- in fact the only one that immediately comes to mind is one of the more famous books I know of (and which I recently saw again in person in a bible exhibit), the Bishops' Bible given to Elizabeth I owned by the Folger Shakespeare Library. As usual, it's impossible to tell who owned this luxuriously curated volume, or how it ended up here -- but it serves as a nice counterpart to the cheap pamphlets in the last couple of posts, showing the possibilities for binding together the full range of publications relating to this period.
Posted by Unknown
Newer Post Older Post Home