N.B.: This post is part of my "Breaking ... Apart" series. For the companion post, "Breaking Shakespeare Apart (Part 2)" go here.

In the previous post I quoted a statement from a book dealer that justified the sale of leaves from the Shakespeare First Folio through recourse to the trade in individual leaves taken from the Gutenberg Bible. I also mentioned a number of copies of a First Folio leaf book called A Noble Fragment -- and that Iowa had a leaf book by that name, featuring a single leaf from the Gutenberg Bible. These leaf books provide a chance to come into contact with -- to actually touch -- books that are culturally and financially invaluable; they also show that these books (or "books") are just as often encountered as disassembled fragments, however noble they might be.

The book is called A Noble Fragment Being a Leaf of the Gutenberg Bible (catalog record here) with a "bibliographical essay" by A. Edward Newton, a well-known early-twentieth century book collector (more on his essay in a moment). 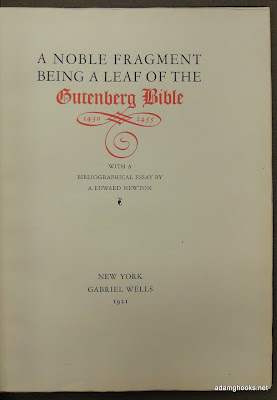 A Noble Fragment was published in 1921, and was one of the first books of its kind -- which accounts for the fact that the De Ricci First Folio leaf book (mentioned in the last post), which was published only five years later, mimics its title so closely. The definition of a "leaf book," according to John Carter's ABC for Book Collectors (available in a PDF here) is worth quoting at length:


A leaf book is (or was--they are out of fashion) a way of making a silk purse out of a sow's ear. A seriously imperfect copy of a famous book presented the opportunity: some suitable authority on the book would be asked to write an essay on it, a distinguished printer would be asked to give it typographic form, choosing a page slightly larger than that of the book in question, and printing as many copies as there were surviving leaves. The whole would be handsomely bound, with one leaf of the original laid in. (138)

Carter states that A Noble Fragment used some 200+ leaves from an imperfect copy of the 42-line bible, and goes on to make a statement about the ethical valence of such a project:


The evidential (not to say monetary) value of a single leaf of that Bible is now so great as to make this seem deplorable vandalism; at the time, no doubt, it was regarded as an honest way to bring to a larger market something in itself virtually unsaleable. Hard cases make bad law: a leaf book is always in some way a hard case. But breaking-up is not to be condoned, even in a good cause.

It is significant that Carter first stresses the "evidential" value, which in the case of the First Folio leaves (and the press-variants to be found there) was virtually destroyed. But although he certainly makes a case against breaking apart valuable books, Carter does recognize the changing attitudes (or "fashion") towards the once accepted practice. Carter's definition also reveals how this practice was made acceptable: what could (should?) be thought of as vandalism is justified (and made collectable, if not quite ethical) through the imprimatur of a "suitable authority" and the imprint of a "distinguished printer."

Newton's "bibliographical essay" does express a noticeable anxiety about the Gutenberg leaf book, even as he praises its cultural status, and the access the leaf book provides to new collectors. He begins with a typically overenthusiastic exclamation:


Reader: pause awhile, for you look--and it may be for the first time--upon an actual page of a Gutenberg Bible, the most precious piece of printing in the world; and, admittedly, the earliest. Truly, a noble fragment!

He goes on to praise this exemplar of the earliest printing, over both the inferior technologies of manuscript production ("wonderful as they are, they are as nothing compared with the printed page") and to all later examples of the printed art: "It has indeed been said that it is the only art in which no progress has been made: that the first example of printing is the best." This is not an uncommon sentiment; in fact, one of the fantastic book artists at the UI Center for the Book told one of my classes the very same thing, waxing poetic over the deep black color of the ink on Gutenberg's printed pages.

Newton's anxiety is evident when he comes to explain how these fragments came to be, well, fragments, and he too has to acknowledge the possibility (and indeed the existence) of vandalism:


The Bible from which this fragment was extracted was itself imperfect, chiefly in that it lacked a number of pages. There were, too, a few pages from which some ruthless hand had cut out a number of the brightly colored initial letters. ... Had the book been perfect, or even had it lacked only a few pages which could be supplied in facsimile, as is usually done in books of great value, it would have been an act of vandalism to remove the leaves from the almost contemporary leather covers which have for so many centuries protected them.

Newton seems to evoke the "ruthless hand" that had removed the colored initials in order to distinguish it from the hands of those who produced this leaf book -- those who, by his own carefully calibrated admission, removed the leaves from the "almost" contemporary binding in which it was found. Newton then goes on to give us some numbers, detailing how much Henry Huntington paid for his Gutenberg Bible (some $50,000 in 1911) and musing that not far in the future a copy could go for more than a million dollars. The bible is too rare, and too expensive, for anyone to dream of acquiring one; unless, that is, one were to acquire just a single leaf.

The essay ends with a direct quotation from a letter in the possession of Newton, written by one Henry Stevens, an agent for the collector George Brinley. Stevens secured for Brinley the second copy of the 42-line Bible to come to America, and Newton ends the essay with this quotation from Stevens's letter:


Please suggest to your deputy that he uncover his head while in the presence of this great book. Let no Custom House official, or other man in or out of authority, see it without first reverently raising his hat. It is not possible for many men ever to touch or even look upon a page of a Gutenberg Bible.

It is a marvelous, and puzzling, quotation: it reinforces the divine status of the object, and the exclusive privilege of contacting that divinity, while at the same time -- in this context, as the last statement before one looks across to the leaf itself -- emphasizing the newfound accessibility of (at least a piece of) the Bible. Since this book now resides in a public institution, anyone can join the exclusive club (whether or not you raise your hat reverently) -- and indeed, from what I can tell this leaf is shown to classes perhaps more often than anything else in the collection (and from a stamp on the front board of the binding, it appears that another institution of higher learning, nearby Augustana College, was a previous owner).

With Newton's final flourish stoking your anticipation, I'll go ahead and post images of the recto and verso:

The leaf is taken from the ninth and tenth chapters of Judges -- you can see the chapter break, marked with rubrication, in the detail below: 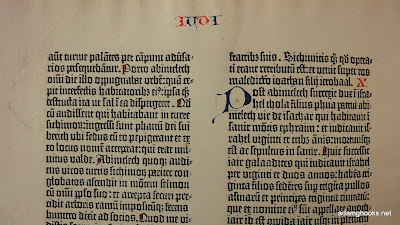 The online catalog entry gives you that information; if you go hunting around the web, you can also find images to compare with these. The British Library has digitized two of their copies (one on paper, one on vellum), and the corresponding images from the paper copy (with only red rubrication at the top) can be seen here. The copy at the Morgan Library is here, where you can see a slightly different red rubricated heading. And finally, the images that match up the best, at least to my eye, come from the Keio University copy here, where you can see both red and blue rubrication.

The Gutenberg leaf book certainly offers an unexpected, and truly rare, opportunity to our students. But it also teaches another important lesson about the ways in which financial value (or perhaps just capitalist exploitation of cultural value) overrides (and destroys) historical evidence. Breaking up is not hard to do; but it is far from a noble enterprise.
Posted by Unknown
Newer Post Older Post Home