[N.B.: This post is a collaboration between myself and Marissa Nicosia (UPenn) and is cross-posted (with a few variants) both here at anchora and at the Penn libraries blog Unique at Penn. This started as another post in my "Breaking Apart" series, which has recently focused on leaf books (see here, here, and here). As you'll see below, our collaboration started when we began comparing our libraries' respective copies of the same leaf book. Marissa's post can be found here] 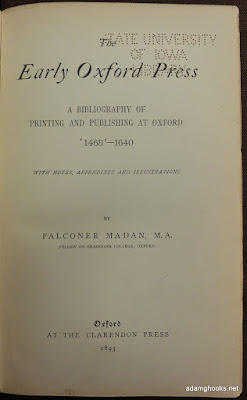 This is a story of a bibliographic reference book that does not simply describe old books, but actually incorporates original leaves from those books, making it a unique and rare work in and of itself. Falconer Madan's study of Oxford printing, The Early Oxford Press (1895), catalogs and provides bibliographical descriptions for books produced in Oxford up to 1640. As he had outlined two years before, in an address to the Bibliographical Society, a "perfect bibliography" would not only attend to the physical aspects of a book, but would attend to the historical and cultural context, as well--or, in Madan's words, it would "set before the student so much of the life of a book as would give him ... the place of the volume in the literature of its subject" ("On Method in Bibliography," 91). As such, a bibliographer should "never rest content with the technical description only." Madan went even further than this, though, arguing that "if possible, leaves from real books should be bound in each copy, to illustrate the actual printing of each decade or each quarter century" (98).

Madan's ambition was (at least partially) fulfilled: the first edition of The Early Oxford Press included specimen leaves from actual sixteenth- and seventeenth-century printed books. Though some of Madan's illustrative examples are facsimiles intended to exemplify different styles of book production, each copy of his book also included a sampling of rare material. In the preface Madan provides a rationale for the inclusion of this rare material, one of the "features of novelty" of his work. In his account, "actual pages of books printed at Oxford" were inserted, pages which were selected, as he is careful to state, "from works which are cheap and common" (vii). At this point Madan inserts a footnote, further justifying his method in opposition to the insertion of "separate leaves from rare and costly books" in another book (a collection of leaves from Swedish liturgies, published in 1879) which, as he curtly notes, was "a practice which cannot be approved."

As Christopher de Hamel notes in his consideration of the often dubious ethics of leaf books, "most writers would say that the leaves being dispersed derived from a book that was already defective and fragmentary" (11). In Madan's case, the books may or may not have been "defective and fragmentary" (although as you'll see in a moment, there was a particular kind of damage in one of the books he used) but nevertheless they were "cheap and common," which alone justifies (for him, at least) breaking them apart. This makes Madan's book a limit case of the genre (especially since it is primarily a reference work) and de Hamel duly notes that Madan's "austere bibliography" is "quite the least bibliophilic leaf book ever issued" (11).

When I posted on twitter that I had found a copy of a book on the open stacks with sixteenth- and seventeenth-century leaves (and later found two more copies of the book, one of which was also in the open stacks), Marissa promised (also on twitter) to track down Penn's copy to see if it also included rare materials. (N.B.: both copies on the open stacks at Iowa are being transferred into Special Collections) Sure enough, it was also on the open stacks with the rare leaves intact. On closer examination of two of the Iowa copies and the Penn copy, we were able to establish a few points of contact. When we realized we had the chance to bring together leaves from texts that had been broken apart, we decided to collaborate.

As it happens, two of the Iowa copies and the Penn copy include leaves from the same books. According to the plan Madan outlined in his preface, the extracted leaves were systematically grouped and divided. The first 700 copies of the print-run included three leaves; beyond 700, at least one leaf was promised. Madan also provided a reference list of books from which these exemplary leaves were drawn:

Here are some images of all three of the leaves from the first two Iowa copies -- the first one I found on the open stacks (InfoHawk record here) : 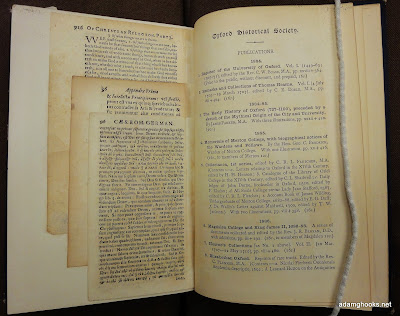 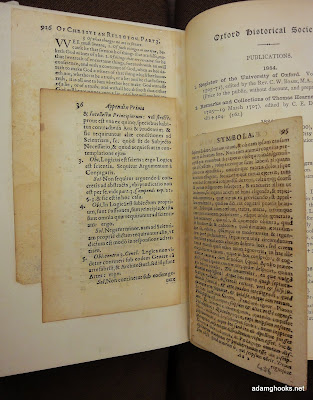 And this is a copy that was already housed in Special Collections (InfoHawk record here) : 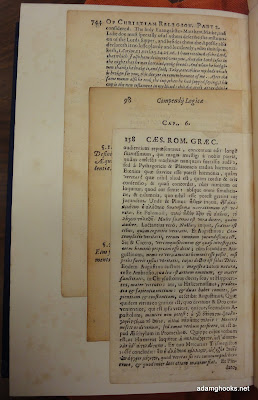 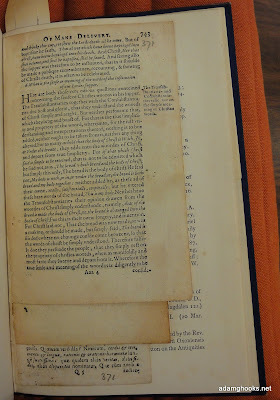 Here's a list of the books from which the leaves in our shared copies are taken, followed by the title-pages of the books, taken from EEBO (Penn actually has a copy of the first book below, the Ursinus--see Marissa's post for more details):

The third Iowa copy (#27, which I found on the open stacks: InfoHawk record here) also has a leaf from the Ursinus, along with leaves from two other books: 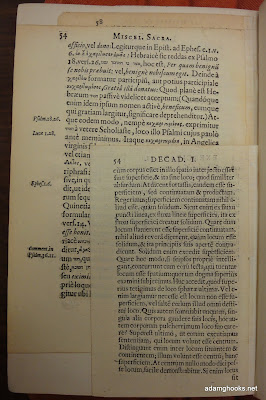 The books from which the other two leaves are taken from are:


Madan's selections suggest that the Oxford printing trade in this era could be represented by a theological work in English (Ursinus), a text on logic in Latin (Sanderson), and a treatise on the value of proverbs in Latin (Reusner). (The Fuller and Carpenter books also fit this general model). This is perhaps unsurprising--the Oxford trade would naturally cater to a primarily academic audience, focusing on popular or useful works which would need to be reprinted on a regular basis, while relying on the import trade, from both London and the Continent, for books which were less popular, less in-demand, less useful, or simply extra-curricular.

Marissa was the first to notice the wormholes, which you can see on the outer margin and in the gutter of the Ursinus leaf. Here's the Penn copy: 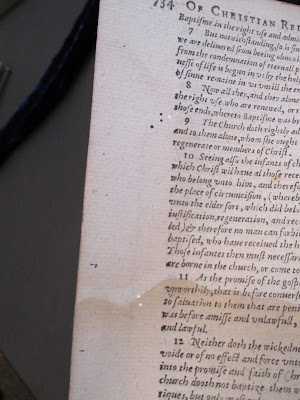 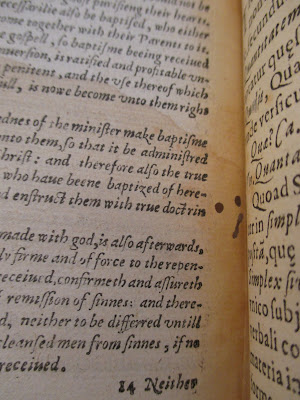 And here are images from the two Iowa copies: 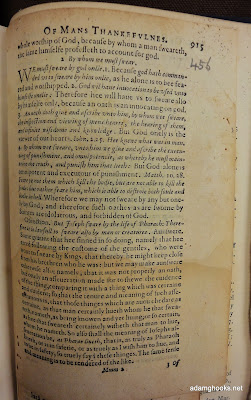 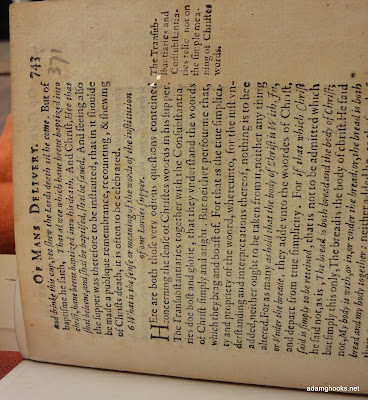 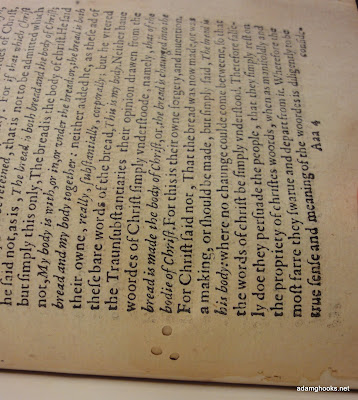 A very hungry bookworm started somewhere before p. 733 (Penn's copy) and ate its way at least through p. 915. The second Iowa copy, just above (where you can more easily see the wormholes) has p. 743, just ten pages on from the Penn copy's leaf, and as you can see the holes match up very well, especially in the gutter.

The third Iowa copy also has a leaf from the Ursinus, but from much earlier in the book: this leaf is from the preamble, which is to be expected, since this is copy #27 of Madan's book. We can presumably guess that they worked their way systematically through a copy of Ursinus--but the bookworm apparently didn't care for the prefatory material, because there is no sign of damage here: 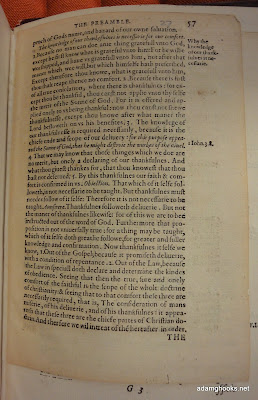 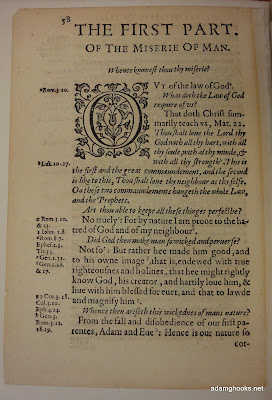 In its original state, this copy of Ursinus's The Summe of Christian Religion was consumed along a trajectory that became impossible when the book was disbound. Linda Charnes suggests wormholes as a metaphor for understanding temporality in our relationship to early modernity and the work of time within early modernity itself. She asks, "Is it possible to create a transmissible methodology out of reading for temporal 'wormholes'?" By reading the wormholes in the scattered leaves of this copy of Ursinus, we are confronted with persistent reminders of the former state of these leaves, bound together within the boards of a late-sixteenth century printed book in Oxford. Just as Charnes's metaphor simultaneously invokes holes made by actual worms and events where the space-time continuum collapses, encountering the wormholes shared between two copies of a bibliographic handbook held at two research universities forces us to consider the materialities of the original book and the leaves rebound at Madan's discretion. Indeed, in comparing these copies of Madan's book we are brought to a greater understanding of the original books, and thus fulfill part of Madan's original mission of reaching a greater understanding of early Oxford printing, if through a circuitous path. These books may have been broken apart--and they may still be housed apart--but they have been brought back together again here in the digital ether.

Falconer Madan, "On Method in Bibliography." Transactions of the Bibliographical Society (1893): 91-106.

In a forthcoming monograph Alberto Manguel discusses the metaphor of the reader as a bookworm who might indiscriminately devour and digest texts (The Traveller, The Tower, The Worm: The Reader as Metaphor [forthcoming from UPenn Press, 2013]). If you're really interested in bookworms, see the fascinating work of Blair Hedges on the traces left by worms in early modern woodblocks: http://science.psu.edu/news-and-events/2012-news/Hedges11-2012

Madan's Early Oxford Press was actually the first volume in what would ultimately become a 3-volume set called Oxford Books: A Bibliography of Printed Works relating to the University and City of Oxford or Printed or Published There (1895-1931). Neither of the later two volumes include any rare materials, nor do reprints of the first volume included in the complete set. This makes The Early Oxford Press a fragment of another sort -- and it's also how I initially overlooked one of the copies of Madan's book shelved on the open stacks. So to conclude here, I've inserted images of the gap in the stacks where one of the stand-alone copies was removed (which itself was part of a larger series of Oxford Historical Society volumes); a side-by-side comparison of this (blue-bound) volume with another (red-bound) stand-alone volume; and the complete 3-volume set, including a reprint of vol. 1, without any rare material: 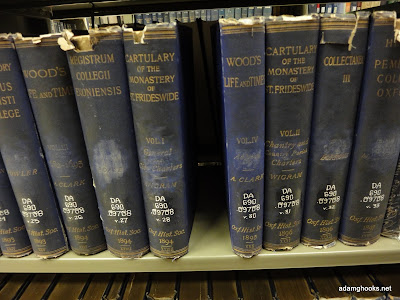 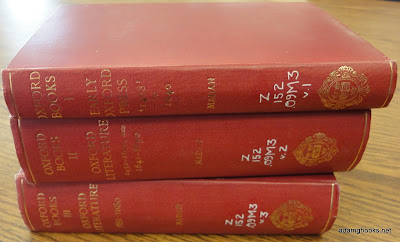