This past summer I was fortunate to be chosen as the E. Ph. Goldschmidt Fellow at Rare Book School. The fellowship gave me the opportunity to take a course on 15th-Century Books in Print and Manuscript, led by the inimitable duo of Will Noel and Paul Needham. The course was not down at the home base of RBS in Charlottesville, but in residence in Philadelphia at the brand new (and beyond gorgeous) Rare Book and Manuscript Library at the University of Pennsylvania, home of the Schoenberg Institute for Manuscript Studies (SIMS). And then there were the field trips to the Free Library of Philadelphia and the Scheide Library at Princeton. I won't go into all the details here (oh, the incunabula!) but needless to say, if you saw my Twitter feed over the summer, you know exactly how jealous you should be.

Enough humble-bragging, though, and back to the point of this post. E. Ph. Goldschmidt was an antiquarian bookseller renowned for his commitment to scholarship (not to mention, as this entertaining biography of Goldschmidt shows, for his commitment to late nights and cigarettes). It just so happens that one of the preliminary readings for my RBS course was Goldschmidt's monumental two-volume study of Gothic and Renaissance Bookbindings, exemplified and illustrated from the author's collection (1928). (The sub-title is no less magnificent for being understated). While reading through Goldschmidt's book on bindings, one in particular caught my eye -- and if you're reading this blog, I think you know exactly why.

Here's an illustration from the second volume of the book, a binding that features a particular printer's device: 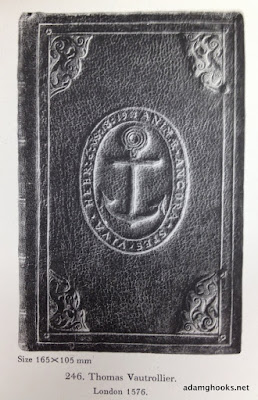 The anchor device -- and yes, I can't resist an anchor device -- belongs to Thomas Vautrollier, the printer of the book in question: a work by Gaspard de Coligny translated by Arthur Golding (yes, the Golding who famously translated Ovid) as The Lyfe of the Most Godly, Valeant and Noble Capteine and Maintener of the Trew Christian Religion in Fraunce, Iasper Colignie Shatilion, sometyme greate admirall of Fraunce (1576; ESTC record here).

Vautrollier has long been of interest to me, since his apprentice, who eventually took over the business, was Richard Field -- the same Richard Field who first printed Shakespeare's narrative poems. (Ahem, I've written a lot about Field in my time, on this blog here, where I explained part of the attraction to his anchor device; and in my "real" scholarship here). Goldschmidt noted in Bookbindings that as far as he knew, this was the only known binding with the device of an English printer -- though he coupled it with a similar binding from Paris, which also featured a printer's device.

With my interest piqued -- and with the responsibility of upholding the rigorous scholarly standards of Goldschmidt -- I did a bit more digging, and found one of the booksellers' catalogues produced by Goldschmidt. (While he did write several "proper" scholarly books, Goldschmidt was known for embracing the scholarly potential of catalogues, and he produced over a hundred during his career). Our library happened to have catalogue #50, Sources of English Literature Before 1640 -- and wouldn't you know, there's the Vautrollier binding once again, this time with a bit more information: 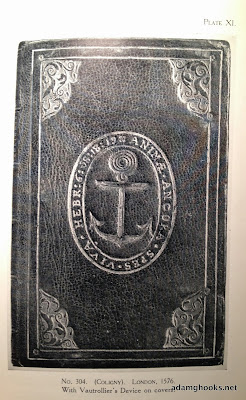 In the original binding of olive morocco, with Vautrollier's publisher's mark stamped in gold on both covers: an anchor surrounded by the legend: 'Animae Anchora Spes Viva. Hebr. 6 Vs 18:19.'  Rebacked.

S.T.C. 22248 (under J. de Serres, author of the Latin text). This sixteenth century English publisher's binding is so far unique of its kind. No similar book either with Vautrollier's or any other English publisher's mark gilt on the covers has so far come to light.

As far as I know, Goldschmidt's claim remains true: this appears to be the only extant example of a sixteenth-century English publisher's binding binding with a printer's device (though if you can prove this wrong, I would love to know). I've been taught that publishers' bindings became standard only much later [edit: see update below!] -- and at any rate, the fact that this binding features an anchor pretty much astounded me.

[UPDATE: Goldschmidt's term "publisher's binding" isn't really accurate, since that term implies a binding issued with an edition, rather than a single copy; as @aaronpratt helpfully pointed out, this looks more like a personal copy with a coat-of-arms, which in this case just happens to be the device by which Vautrollier was known.]

This binding, along with Goldschmidt's note, provides some extra information about the Vautrollier/Field device, since the binding features an elaborated motto along with the anchor. As I discussed here, the anchor device was a relatively common one, and the Vautrollier/Field device featured the motto "Anchora Spei," which translates as "anchor of hope," a phrase which derives from Paul's epistle to the Hebrews -- a source that the binding motto confirms. The extended motto here better encapsulates the sense of verses 18-19, in which hope is defined as the "immutable" anchor of the soul, both "sure and steadfast" (as the Geneva bible puts it).

Goldschmidt included this volume in a catalogue, which means that, presumably, it was sold at some point. So I did a bit more digging around (thanks to the holdings information in the ESTC record) and, lo and behold, I found that the book now resides in the Houghton Library at Harvard, as shelfmark Typ 505.76.781. If you follow that link, you'll see a note that says "Contemporary morocco with the publisher's device and motto in gilt on both covers. The only known such binding" (along with a reference to both the McKerrow number and to Goldschmidt).

What you won't find there is an image of the binding, which the curator John Overholt (@john_overholt) was kind of enough to send along to me. And so here you go -- the only known such binding, and a beauty at that: 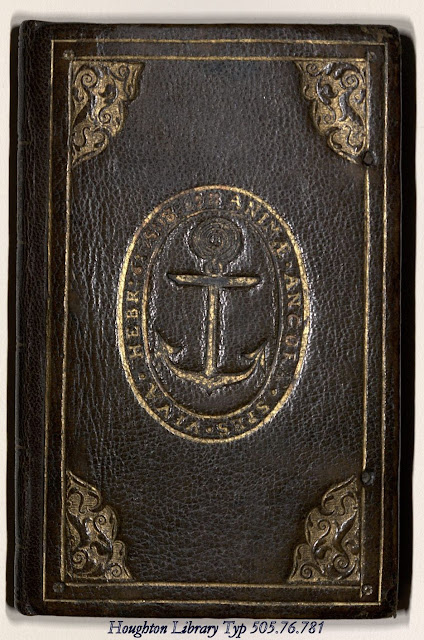