[N.B.: Here's the next in my "Breaking Apart" series, which has recently focused on leaf books -- including entries on Gutenberg and Shakespeare]

Because it is impolitic--at least generally speaking, and at least now--to break apart copies of rare and valuable books in order to sell them off in pieces (or to incorporate them in a luxurious leaf book) the copies chosen to be broken apart are often imperfect, or damaged, or simply and visibly used, and hence far from pristine. And so it is with this leaf from a 1535 Coverdale bible, which is covered in manicules. (And to see those manicules in action, in one of the better GIFs you're apt to come across, see this post from the UI Special Collections tumblr). No, really -- dancing manicules!

If you click to zoom in on this image, you can see a plethora of manicules, along with some underlining, and even a marginal comment (more on that in a moment). The same is true of the verso, as well: 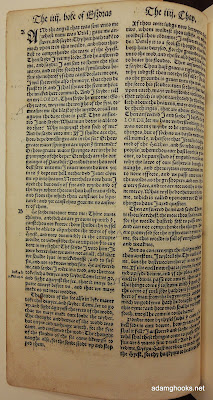 This leaf is included in a substantial leaf book, published in 1974 by the Book Club of California, one of the major producers of leaf books in the twentieth century (InfoHawk catalog record here) 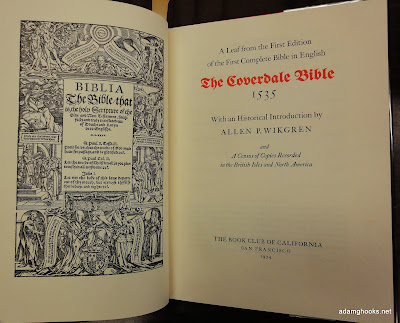 The introductory essay, on the history of the Coverdale bible, is lengthy by leaf book standards, and an appendix adds to the heft (and usefulness) of the volume by providing a census of copies in the U.S., Canada, and the U.K. No doubt one of the motivations for including this extra (and insistently scholarly) material is both to justify the existence of the book, and to separate it from the relatively slight essays that were often included in previous leaf books.

But that's not why this book is interesting -- especially to me. The interest lies in the annotations and manicules that litter the pages here. I'm not certain from which copy of the bible this leaf was originally taken, but a good guess is that it was chosen, at least in part, because the annotations ruined it, at least in the eyes of (certain) collectors. And as you can see from the enlarged image below, this intrepid manicule-maker even left an annotation in the  margin: 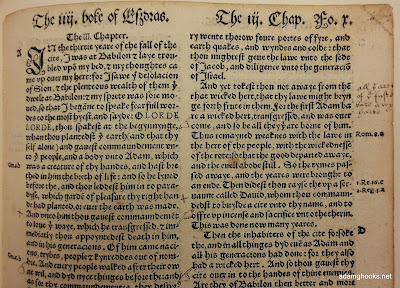 The page has been trimmed, so it's not easy to make out, but here's a partial transcription:

The annotation clearly paraphrases the printed text, which is from the third chapter of 2 Esdras (one of the apocryphal books, an apocalyptic history of humankind) which reads as follows:

And yet tokest thou not awaye from them that wicked hert, that thy lawe might brynge forth frute in them. For the first Adam bare a wicked hert, transgressed, and was ouercome, and so be all they yt are borne of him.

I think it's relatively certain, then, that the trimmed annotation should read in full as follows:

All I can say is that if I were reading this passage, I'd be sure to mark it up, too.
Posted by Unknown
Newer Post Older Post Home