This year marks the fifth centenary of the death of Aldus Manutius, and there have been a plethora of symposia and exhibits that celebrate the life, career, and influence of the great scholar-printer (see the list maintained by the Manutius Network for more information). Since Aldus has lent his anchor device to this website, it should come as no surprise that I recently participated in one such commemorative event: Renaissance Print Culture: An Aldine Quincentennial Symposium sponsored by the Center for Renaissance Studies at the Newberry Library in Chicago. I gave a paper called "Reading Devices" -- and I thought it worthwhile to provide a version of it here. This is also a chance to collect together some of the previous posts from Anchora that discuss, in one way or another, the practice and importance of "reading" printers' devices. 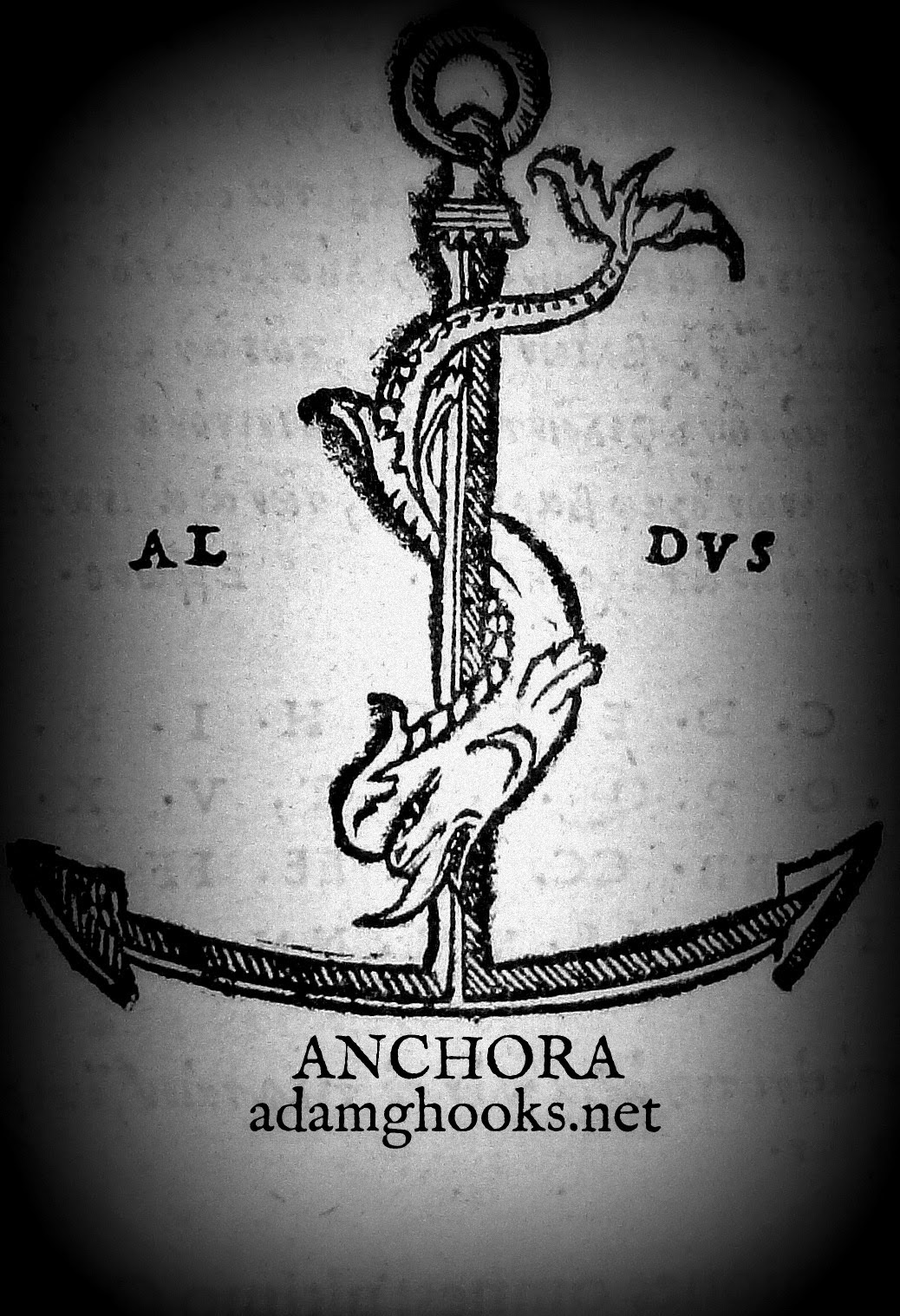 If you'd like to know some of the implications of this kind of "reading," or to see where this kind of scholarship needs to go, then skip to the end, where I've outlined a few of the excellent questions offered by the symposium participants. I don't have any answers -- my purpose was to pose questions and to point towards areas that need more attention. We need to rethink some of the ways in which we engage with early modern textual culture in order to start doing the kind of work that is necessary to even begin answering these questions -- or indeed, to even recognize what kinds of questions we should be asking.

The inaugural post at Anchora examined the story behind the famous Aldine anchor-and-dolphin device, and the motto it illustrated -- Festina Lente -- and I adapted some of this material to begin my Newberry paper. I've also updated that post (with a few more links to Aldine resources), so the first thing you should do is to just go read it here. Why did Aldus choose the dolphin-and-anchor? One potential reason is that Venice was associated with -- and even depicted as -- a dolphin (thanks to symposium speaker Elizabeth Horodowich for the reference).

As outlined in that inaugural post, and as feared by the device's first explicator Erasmus, early modern readers did indeed judge a book by its cover, and there is much to learn by attempting to recover the ways in which they did so. Title-pages were the most visible identifier of a book, and they were commonly used as advertisements, aimed at both the wholesale and retail markets. All the various elements of a title-page were important sites of meaning, not only for their practical, factual value, but for their interpretive significance--including the title, authorial attribution, various other kinds of text, the ornament and/or device, and the imprint with the crucial information regarding the printer, publisher, and bookseller, the date, and most importantly the location where copies could be acquired--thus allowing us to reconstruct a topography of the book trade (like the Atlas of Early Printing).

Devices in particular were a way for printers and publishers to distinguish and market their merchandise; they were not purely informational or ornamental, but were visible and legible as a form of paratext at the intersection of visual symbolism and textuality. Devices drew the attention of customers and readers, who interacted with, interpreted, collected, cut out, and even fought over them. Devices and imprints could also be appropriated and adapted, copied and counterfeited, falsified and faked--which only emphasizes their importance for understanding marketing, regulation, and interpretation.

The influence and importance of a widely circulated and imitated device like the Aldine dolphin-and-anchor is easy to see, as the testimony of Erasmus demonstrates. Scholars in my own field, who focus on the early modern book trade in England, have turned their attention to the great variety of paratextual elements of early modern books (prefaces, marginalia, title-pages, frontispiece engravings, and even the seemingly purely informational imprint) -- yet devices, despite their visual prominence, have been largely invisible. My goal is to suggest some of the ways in which these elements can make meaning for us--that is, the ways in which they were intended to be used and understood, but more importantly the ways in which they can be interpreted, and can open up new ways of understanding the textual culture of the Renaissance.

The central case study I presented was an anchor device used in England, starting in the late-sixteenth century -- and it's appeared on this site twice before. Thomas Vautrollier was a Huguenot refugee who began his career in England as an agent for the famed Antwerp publisher Christopher Plantin; he would go on to run on e of the most successful and accomplished printing houses in London. Vautrollier employed an anchor device with the motto "Anchora Spei" -- the "anchor of hope" -- and to find out more about this device, just go to my previous post Animae Anchora Spes Viva.

Vautrollier's device was not a direct echo of the Aldine anchor (although some English readers did make a connection between the two devices). At the very least, we know that Vautrollier was familiar with the Aldine press. England depended on the importation of books from the continent to satisfy demand, and so books from the well-known continental publishing houses were a common sight. When the domestic trade finally picked up production in the 1570s, Vautrollier was granted a patent for a number of Latin books, including the Phrases Linguae Latinae of none other than Aldus Manutius, and the complete works of Ovid. In 1582, Vautrollier printed an edition of the Metamorphoses based on teh text of the Venetian Andrea Navagero, who had edited Ovid for Aldus. (You can find out more about the patents here -- at the excellent digital version of T. W. Baldwin's William Shakspere's Small Latine & Lesse Greeke).


Devices could constitute a form of communication, one with commercial and interpretive consequences. But at times, readers were simply fascinated with or intrigued by a device, for what appears to be a kind of aesthetic appreciation. Here is a remarkable example from a hybrid book at the Folger Shakespeare Library. (You can read more about this book in a post by Margaret Hannay and Heather Wolfe at The Collation here).

I found another example of this kind of aesthetic appreciation closer to my home, in the Special Collections Library here at Iowa. 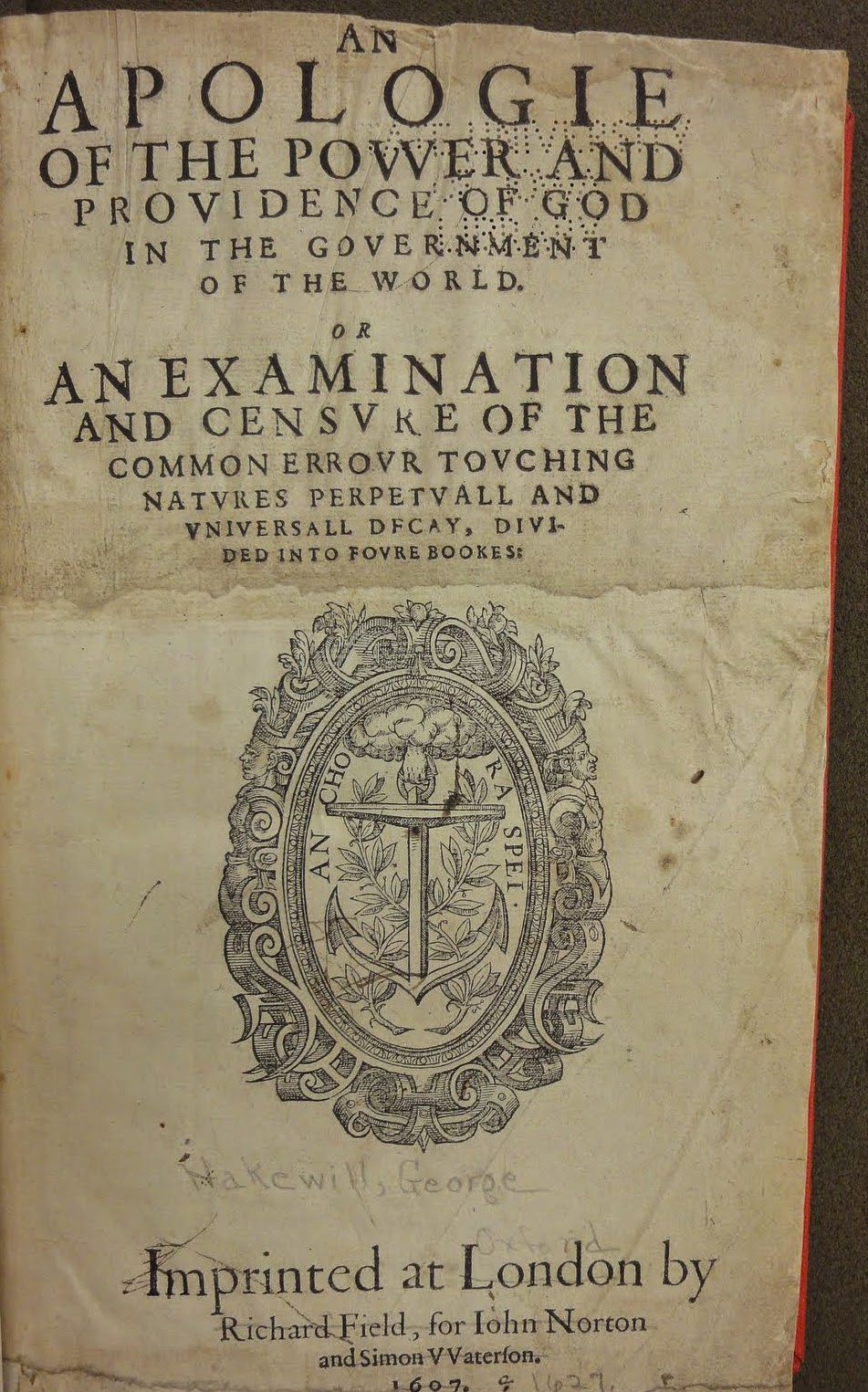 As I wrote in an earlier post -- Amor Anchorae -- this anchor device does not belong with this book (it is one of Vautrollier's "Anchora Spei" devices, which descended to Richard Field, who inherited his business). The device was originally a part of the handsome colophon to Sir John Harington's Orlando Furioso. At some point, an owner of the book pictured above (a religious treatise) was faced with a torn folio title-page, or a desire to conceal a controversial book, or simply held an affinity for anchors and took the colophon page to repair, or to obscure, or to enhance, the appearance of the book. (For more information, just go here).

And readers continue to engage with printers' devices in remarkable ways -- like this animation of the Aldine anchor made by Laura Aydelotte (@LauraEAydelotte) -- and for more animations, go here (part of the Provenance Online Project at Penn).

Erasmus would likely not have approved of such interactions with printers' devices, and yet he freely acknowledged the freedom of customers and readers to engage with the book trade. As his account demonstrates (and again, for more on Erasmus and his view of devices, go back to Festina Lente) a thoughtfully-chosen and apt device could represent and identify the motives and intentions of a liberal-minded scholarly printer -- but it could also be used by unscrupulous pirates to capitalize on a successful brand, and it could thus be misunderstood by unwitting consumers willing to purchase anything with a Venetian imprint, regardless of its content. In Erasmus's words, with a mixture of admiration and lamentation: "printing is a source of profit from which no mortal being is excluded. You may not draw what you like, or say what you like, without some risk; you may print anything."

And you may use any device, for a variety of purposes; and you may interpret that device in a variety of ways (both then and now). So perhaps we should pay more attention to the ways in which we can make meaning by reading devices.

I was fortunate to field several incisive questions -- and as I mentioned above, I didn't have any answers. But I did want to briefly mention a few of these questions, since I think they raise several important issues -- and possibilities for further research -- for the practice of reading devices.

The respondent mentioned the similarity between (some) printers' devices and the images in emblem books. There is certainly a connection there -- the "anchor of hope" did circulate in (altered versions) in some emblem books -- but as Paul Gehl mentioned, an emblem on a title-page is a rather different thing from an emblem in an emblem book. And for more on emblems, I recommend Gehl's excellent experimental online text Humanism for Sale

And Megan Heffernan (aka @thecompass) asked about the (literally) conservative nature of devices -- since they were used and re-used, sometimes over decades, how their significance change as typographic conventions developed?